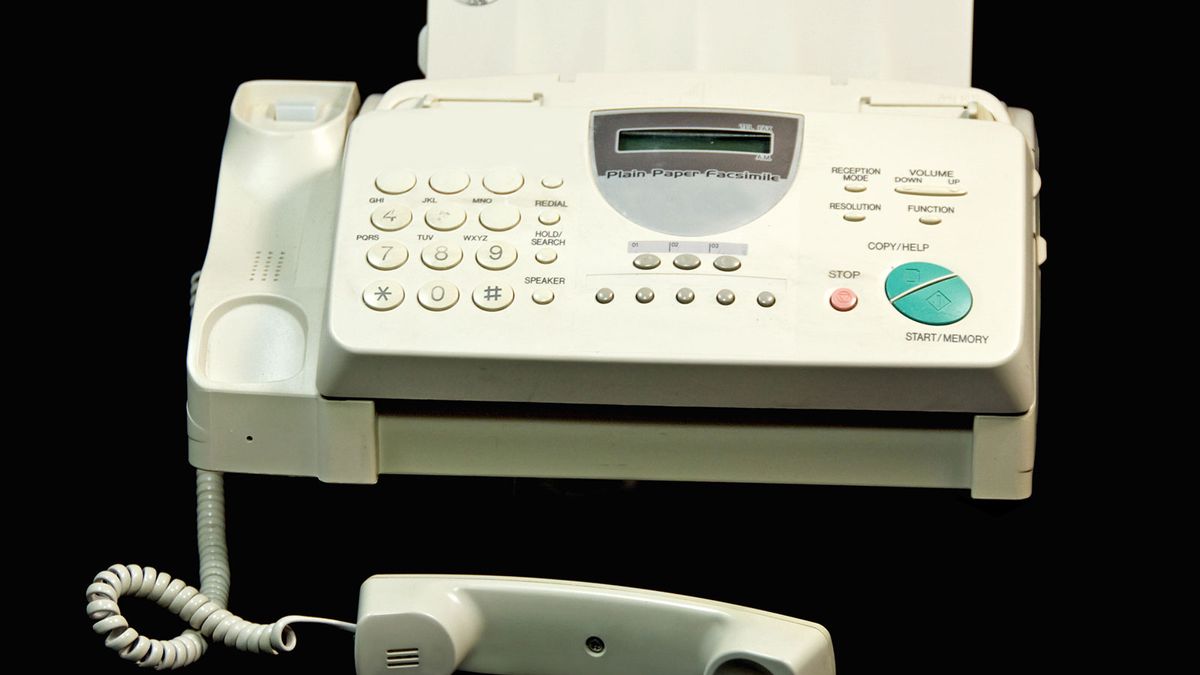 In 1878, Alexander Graham Bell filed a patent for a history-altering device called the electronic telephone. But what many people don’t know is that the patent for another amazing communications tool – the fax machine – was filed by a Scottish clockmaker named Alexander Bain three decades earlier.

That’s right, fax machines predate even rudimentary telephones. And with cockroach-like survivability that makes very little sense from an evolutionary standpoint, the fax machine lives on, beeping and wheezing up sheets of paper the world over. The question is … why?

To understand, it helps to a know a bit about the facsimile machine’s place in history. Although the technology had been around for decades, it wasn’t until the 1939 New York World’s Fair that fax machines first seized mainstream recognition in the United States. There, attendees stood slack-jawed in amazement as they viewed images and text arriving from around the world at 18 sheets per minute.

The machines were simply too expensive for everyday use, though. Even in 1982, one standalone fax machine sold for a whopping $20,000, far too pricey even for most businesses, much less individual consumers. It wasn’t until later in the 1980s that the cost of the machines dropped to a point that businesses and home offices found them useful, notably for documents that required legal signatures.

Copied signatures, as you can probably guess, were a source of controversy for years, as legal professionals argued about the validity of documents that arrived via phone lines. However, as court after court confirmed the validity of faxed signatures, doctors, lawyers, financial gurus, and other professionals began to rely on faxes to transmit paperwork all over the place.

Thus entrenched in the workflow and minds of countless millions of people, the late ’80s saw a dramatic rise in the number of fax machines. America had only around 300,00 of the contraptions in the middle of the ’80s. By 1989, there were more than 4 million. The fax machine’s heyday was at hand.

The faxing process is one that billions of people have ingrained into their consciousness. Place a signed document on the machine. Punch in the destination phone number. Hit the green button, and minutes later, your paperwork is in the hands of a colleague on the other side of town – or on the other side of the continent. As long as the fax machine has paper, the cartridge is not out of ink and nothing has gotten stuck in the transmission process.

In the mid-1990s, another history-changing technology exploded in use – the internet, which provided people with ways to instantly send text, pictures and documents, without the use of paper. With the advent of widespread email, it seemed that fax machines were doomed.

Why Fax Machines Live On

A 2017 study from IDC showed the four major industries that still use faxing (manufacturing, health care, finance and government) all predicted increased use of faxing over the next two years, averaging a 25 percent increase. So, why’s that?

Faxing is a familiar technology that people trust. The complexities of the internet and its many offshoot technologies (along with endless headlines about hackers, spyware, viruses and data breaches) create in many people’s minds a sense that the web is not secure.

Fax machines are a habit. And they’re a habit that dies hard, because they’re a simple, low-tech, interoperable system that anyone can use with just a few minutes of training.

Also, fax machines, like hardy, pesticide-resistant roaches, are evolving with the times. The people surveyed by IDC said the biggest reason for the increase in faxing was that faxing was now integrated with email (as digital faxing) and so was easier to use.

“I fax office notes, prescriptions, lab data, orders and consultation requests. I will fax anything else that is requested,” says Todd Johnson, a doctor at Access Family Medicine in Lincoln, Nebraska. “I would email just as easily, but I don’t have a general email account to send the requested information to typically. Usually I am only provided with a fax number to return the requested information.”

READ MORE:  How to free up space by deleting large email messages in Microsoft Outlook

“All of my faxing is digital. I don’t use a feed and fax paper machine,” he says in an email interview. “I can fax from any of my computers, tablet, or smartphone. I use them because I am requested to use them by other facilities, they are easy to use, built into my EHR software, and now electronically configured into my phone system (I just drag and drop a PDF into the fax portal and away it goes).”

If that sounds too good to be true, never fear, there’s still one old-school faxing bugaboo at hand: busy signals.

In spite of the intermittent hiccups in faxing, the machines are likely to live on for decades. They are comfortable, cheap, convenient and generally reliable. They’re accepted around the world in ways that digital signatures sometimes are not.

So, until digital alternatives find the same kind of universal recognition, you can expect that fax machines will still be here, beeping and whirring even in the ashes of a great apocalypse.