You Are Here: Home » Pathogenicity and Morphology of Paragonimus Westermani 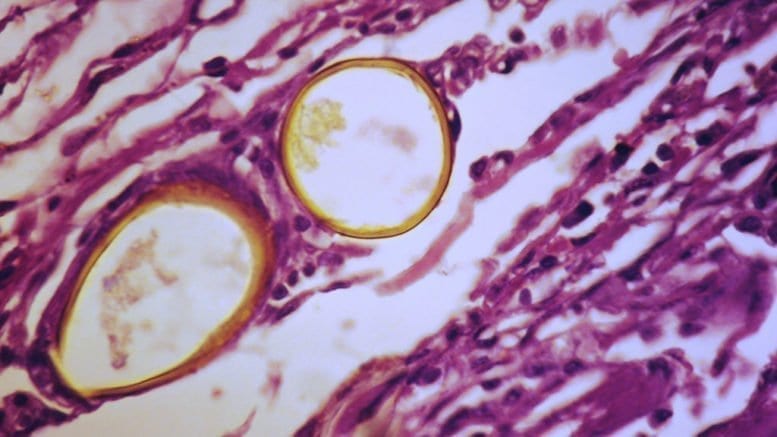 Paragonimus Westermani is extensively distributed in the Far East, and its also found in West Africa and South America.

(a) The Adults of paragonimus westermani live in the bronchi, lungs and occasionally in the liver, spleen and other organs of man, dog, cat, tiger, wolf, beaver, mongoose and pig.

(b)     The Eggs are present in sputum and more rarely in feces. It is infective only to the snails.

(c)     The first larval host, in which sporocysts, rediae, and young cercariae develop is the fresh-water mollusc Semisulcospira libertine and other species of the same genus.

(d)    The second larval host in which metacercariae occur is the fresh-water crabs and crayfish.

READ MORE:  Concise Description of the Functions of the Mammalian Skin

Fleshy worms, reddish-brown in colour when fresh, in shape resembling one half of a pea and covered with short spines; they measure up to 1.2cm in length, 6mm in breadth and 5mm in thickness. Details of the internal anatomy can only be seen after compressing and clearing the fluke. The genital pore is placed to the right of the middle line immediately behind the ventral sucker. The testes are lobed, and situated in the posterior third of the body, and the ovary is on the left side, just behind the ventral sucker. The uterus is coiled and asymmetrical, on the right side. The vitellaria appear as a bands along the edges of the body. The eggs measure about 100cm by 50cm, are ovoidal, operculated and golden brown in color. They contain a fertilized unsegmented ovum when found in sputum or feces.

READ MORE:  Derivatives of Mineral Salts and their Functions in the Human Body

When the eggs are in fresh water, at a suitable temperature, a miracidium hatches out in from two to seven weeks. In the Far East the sporocysts, rediae and young carcariae occur in various species of the mollusk Semisulcospira, and especially S. libertine.

The metacercariae are found in various fresh-water crabs (Potamon and Erocheir), and also in crayfish (Astacus). The cercariae penetrate the joint folds and encyst, most commonly, in the gills and muscles.

When the infective cercariae are swallowed by man in uncooked crab or crayfish, they immediately penetrate the wall of the intestine, migrate into the abdominal cavity and pass through the diaphragm into the thoracic cavity where they become adult. An encapsulated cyst develops round the adult worm as a result of inflammatory reaction on the host.

The main lesions are in the lung and consist of fibrosis of the pulmonary tissue, cystic dilation of the bronchi and abscesses which ulcerate through to mucous, serous or cutaneous surface. The sputum is viscid and frequently blood-stained; occasionally profuse haemoptysis occurs. The parasite, in its migrations, sometimes settles in abnormal sites such as liver, spleen, brain, the symptoms depending on the location of the fluke. How to Get a Free Business Email Address from Zoho

Pathogenicity and Morphology of Paragonimus Westermani