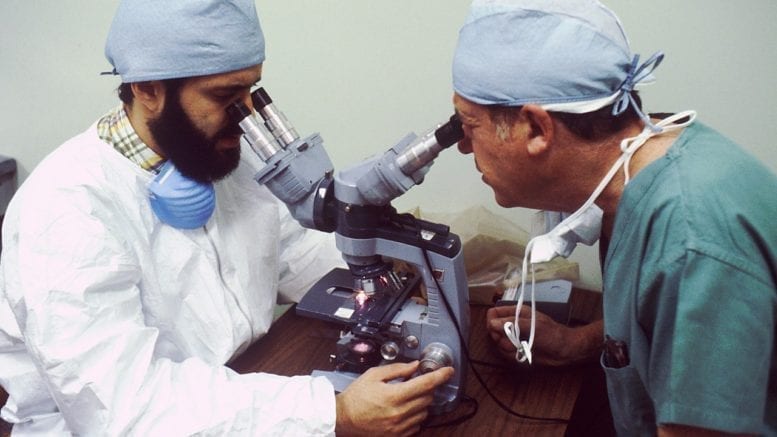 In trying to explain the laboratory diagnosis of Dengue virus, we first look at the various serotypes which include DEN-1, DEN-2, DEN-3, and DEN-4, that cause dengue (DEN) and dengue haemorrhagic fever (DHF). The viruses are transmitted by Aedes mosquito, principally Aedes aegypti (day-biting mosquito, found in urban areas, preferring to feed on humans).

In recent years, inadequate mosquito control urban population growth, climate changes (Ei Nino), and greater air travel have led to the rapid spread of dengue viruses and major epidemics of DEN/DHF particularly in Southeast Asia, Indian subcontinent, Western Pacific, Central and South America, Dengue viruses can be found in over 100 countries in the tropics and subtropics. With an estimated 2.5 billion people living in areas at risk for epidemic transmission, DEN/DHF is the most important mosquito borne virus disease affecting humans. As yet, there is no vaccine available to protect against DEN/DHF and there is no specific treatment.

Dengue is characterized by high fever, headache, pain behind the eye and in muscles and joints, enlarged lymph glands, and a maculopapular rash. Sometimes there is abdominal pain with vomiting, and occasionally haemorrhagic symptoms. The virus multiplies in the reticuloengothelial system and enter the blood circulation, most infections cause leucopenia. Many are mild and self limiting. Early infection are often mistaken as malaria, hepatitis or a flu-like viral illness.

This serious life-threatening condition most frequently affection children and others who have been previously infected with one serotype or strain of dengue virus and subsequently become reinfected with a difference serotype or strain. It is though that the secondary immune response leads to the formation of virus-antibody immune complexes which activate complement, causing vascular damage and disseminated intravascular coagulation (DIC) with spontaneous bleeding. In some patients, DHF progresses to circulatory collapse referred to as dengue sock syndrome (DSS). The morality rate in DHF is 10-40% (mostly children). DHF is characterized by a rising haematocrit (PCV) due to plasma leakage together with a reduced platelet count, hepatomegaly, haemorrhagic symptoms with bleeding into the skin and a positive tourniquet test.

Dramatic increases in DHF have occurred recently is Asia, the Caribbean, and South America. Epidemic DHF has not been reported from Africa but sporadic cases clinically resembling. DHF have been reported from Djibouti, Mozambique, and other African countries.

Laboratory diagnosis of dengue virus can be helpful in studying the epidemiology of dengue and dengue hemorrhagic fever DEN/DHF and also in monitoring the progress of patients being treated for DHF and DSS include:

Measurement of Haematocrit: In DHF there is a rise in haematocrit level (often by 20% or more), indicating haemoconcentration due to increased vascular permeability and leakage of plasma.

Platelet count: this is greatly reduced in DHF.

Coagulation tests: In DHF, bleeding and clotting times are prolonged and the prothrombin time and partial, thromboplastin times are increased. Fibrinogen levels are usually decreased.

Clinical chemistry tests: In DHF, serum amino-transferases and blood urea are raised. Serum sodium and albumin are reduced Albuminuria is usually present and in some patients also haematuria. Measurement of electrolytes is helpful in monitoring treatment.