An Ostwald Viscometer, which contains a vertical capillary tube T, is widely use for comparing the viscosities of two liquids. The liquid is introduced at S, drawn by suction above P, and the time t1 taken for the liquid level to fall between the fixed marks, P, Q is observed. The experiment id then repeated with the same volume of a second liquid, and the time t2 for the liquid level to fall from P to Q is noted.

Suppose the liquids have respective densities p1, p2,. Then, since the average head h of liquid forcing it through T is the same in each case, the pressure excess between the ends of T = hp1g respectively. If the volume between the marks P, Q is V, then, from Poiseuille’s formula, we have, 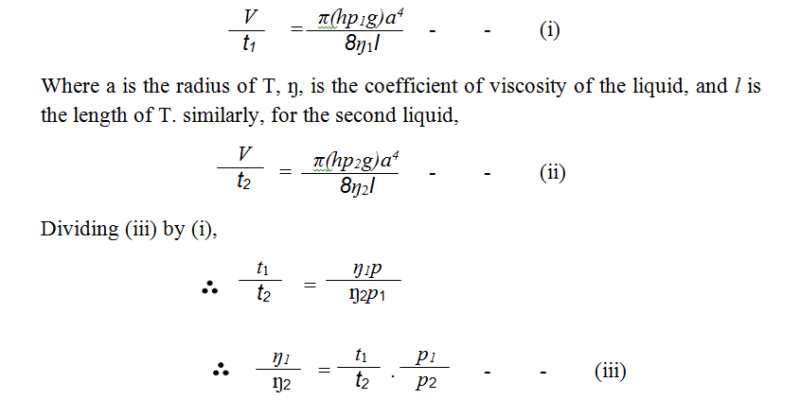 Thus knowing t1, t2, and the densities p1, p2, the coefficients of viscosity can be compared. Further, if a pure liquid of a known viscosity is used, the viscosity of a liquid. Since the viscosity varies with temperature, the viscometer should be used in a cylinder C and surrounded by water at a constant temperature. The arrangement can then also be used to investigate the variation of viscosity with temperature. In very accurate work a small correction is required in equation (iii). BARR, an authority on viscosity, estimates that nearly 90% of petroleum oil is tested by an Ostwald viscometer.

READ MORE:  The Production and Uses of Ultrasonics

When a small object, such as a steel ball-bearing, is dropped into a viscous liquid like glycerin it accelerates at first, but its velocity soon reaches a steady value known as the terminal velocity. In this case the viscous force acting upwards, and the upthrust due to the liquid on the object, are together equal to its weight acting downwards, so that the resultant force on  the object is zero. An object dropped from an aeroplane at first increases its speed v, but soon reaches its terminal speed. This illustration shows variation of V, with time as the terminal velocity vo is reached.

Stokes’ formula can be used to compare the coefficients of viscosity of very viscous liquids such as glycerine or treacle. A tall glass vessel G is filled with the liquid, and a small ball-bearing P is dropped gently into the liquid so that it falls along the axis of G. Towards the middle of the liquid P reaches its terminal velocity vo which is measured by timing its fall through a distance AB or BC.

The upthrust , U, on P due to the liquid = 4πa3όg/3, where a is the radius of P and ό is the density of the liquid. The weight, W, of P is 4πa3pg/3, where p is density of the bearing’s material. The net download force is thus 4πa3g(p-ό)/3. When the opposing frictional force grows to this magnitude, the resultant force on the bearing is zero. Thus for the terminal velocity vo, we have, 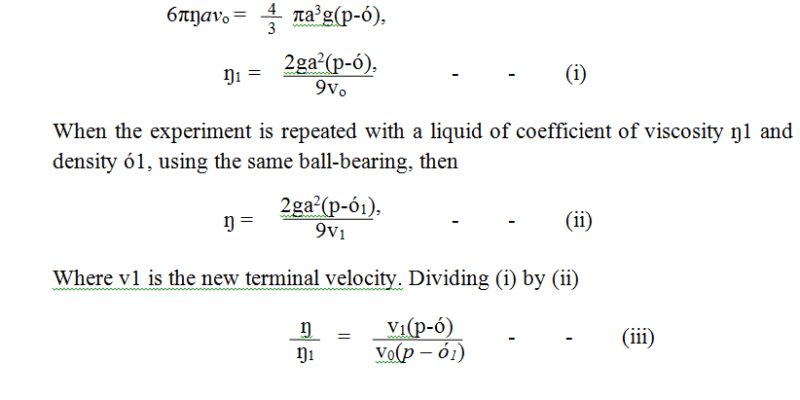 Thus knowing v1, v, p, ό1, ό, the coefficients of viscosity can be compared. In very accurate work a correction to (iii) is required for the effect of the walls of the vessel containing the liquid.

Viscosity forces are detected in gases as well as in liquids. Thus if a disc is spun round in a gas close to a suspended stationary disc, the latter rotates in the same direction. The gas hence transmits frictional forces. The flow of gas through pipes, particularly in long pipes as in transmission of natural gas from the North Sea area, is affected by the viscosity of the gas.

The viscosity of gases is explained by the transfer of momentum which takes place between neighboring layers of the gas as it flows in a particular direction. Fast-moving molecules in a layer X cross with their own velocity to a layer Y say where molecules are moving with a slower velocity. Molecules in Y likewise move to X. the net effect is an increase in momentum in Y and a corresponding decrease in X, although on the average the total number of molecules in the two layers is unchanged. Thus the layer Y speeds up and the layer X slows down, that is, a force acts on the layers of the gas while they move. This is the viscous force. We consider the movement of molecules in more detail shortly.

Although there is transfer of momentum as in the gas, the viscosity of a liquid is mainly due to the molecular attraction between molecules in neighboring layers. Energy is needed to drag one layer over the other against the force of attraction. Thus a shear is required to make the liquid move in laminar flow.