1. By Having A Waterproof Integument: The obvious way of reducing loss of water which is one of the forms of osmoregulatory adaptations, has been successfully developed by a number of groups such as the insects, reptiles, birds and mammals. The keratinous scales of reptiles and the cornified epithelium of mammals provide both physical protection and insulation against water loss. This explains why most of these animals can live successfully in hot, dry areas. Among all the terrestrial vertebrates, the amphibians are the least well adapted to this kind of water conservation. The skin of amphibians is thin, moist and presents very little resistance to evaporation. The skin is used as a supplementary respiratory surface which means that it must be permanently moist which makes them always restricted to damp places.

Insects have developed some osmoregulatory adaptations such as waterproofing to a very great degree of sophistication far beyond any other invertebrate and have achieved this feat via a mechanism that is very different from that used by vertebrates. The surface of the insect cuticle is lined by a microscopic thin layer of wax that is impermeable to water and confers upon the cuticle its waterproofing properties. If this wax layer is removed, the rate of water loss would be greatly increased. It has been found experimentally, that cockroaches show a little increase in water loss below a critical temperature and shows a rapid and dramatic increase in the rate of water loss as soon as the critical temperature is reached which is found to be about 30C. At this critical temperature, the arrangement of wax molecules changes in such a manner that the cuticle becomes much more permeable to water. Although waterproofing plays a key role in preventing excessive water loss, it is certainly only a passive way of water conservation. Water proofing cannot be total because the animal has got to breathe and there would be certain amount of evaporation from the respiratory surfaces no matter how protected they may be. 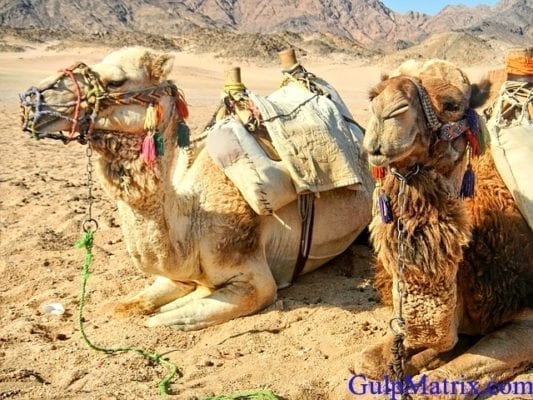 2. By Reducing The Glomerular Filtration Rate: Terrestrial vertebrates reduce their filtration rate by reducing the number and size of glomeruli in the kidney just like the way marine teleost do. Terrestrial vertebrates particularly those that dwell in hot and dry places like the desert regions reduce water loss by this method. For instance, the desert frog, chiroleptes, which is one of the very few amphibians that flourish in hot deserts, has smaller and fewer glomeruli than its relatives living in moist temperate regions.

3. By Producing A Non-Toxic Nitrogenous Waste: Marine teleosts excrete nitrogenous waste in the form of trimethylamine oxide which is an adaptation for conserving water. This trend can also be found in terrestrial animals such as the amphibians that excrete urea which is toxic in high concentrations. To this end, it requires less water for its removal unlike ammonia. Reptiles, insects and birds have moved forward in excreting nitrogenous waste as uric acid, which unlike urea, is insoluble in water. Water can then be extensively removed from these animals through the excretion of uric acid which is excreted as a semi-solid substance.

4. By Reabsorbing Water: The main function of the kidney tubules is to reabsorb water from the glomerular filtrate. Desert animals have an extra loop of Henle, which is present in mammals and birds that makes reabsorption of water by the kidney more efficient, producing more concentrated urine. The kangaroo rat produces urine which is four times more concentrated when compared to that of man. This can be attributed to the long loop of Henle in the kangaroo rat and the fact that the level of ADH in its blood is usually high. Furthermore, the extent to which water can be retained depends also on the nature of the excretory product as ammonia eliminates high amounts of water compared to urea. Uric acid being the most ideal as it is insoluble in water.

Insects have evolved a mechanism that is essentially similar to that of reptiles and birds. This was extensively investigated by Sir Vincent Wigglesworth in the blood sucking bug known as Rhodnius. Between the midgut and the rectum of this blood sucking bug is a bunch of blind ducts called the malpighian tubules which open into the gut at one end while their free ends float in the blood-filled body cavity. The insect’s tissue produces nitrogenous waste in the form of soluble potassium urate which is liberated into the blood and taken up by the cells lining the malpighian tubules. The tubules are muscular and their writhing movements may facilitate the absorption of urate by stirring up the blood. In the cells of the tubule, the potassium urate reacts with water and carbon(IV) oxide(from respiration) to form potassium bicarbonate and uric acid. The carbon(IV) oxide is absorbed back into the blood, but the potassium bicarbonate is deposited in the lumen of the tubule. As the uric acid moves towards the gut, water is vigorously reabsorbed back in to the blood, to such an extent that the proximal end of the Malpighian tubule becomes filled with solid crystals of uric acid. Electron micrographs show that the epithelial cells bear numerous microvilli which increase the surface area for water reabsorption. Water is further reabsorbed by the folded walls of the rectal gland so that by the time the urine leaves the body it is very much more concentrated than the blood.

The remarkable ability of insects to conserve water has unarguably contributed towards their success, and this is in large measure due to the action of the malpighian tubules and the rectal glands. Insects conserve water more efficiently than any other group and this is why we find them in the hottest and driest places.

5. By Means Of Behavior Changes And Adaptation: Several animals avoid or reduce to a large extent, the problem of water loss by modifying their behavior or changing their habitat. The kangaroo rat, for instance, cuts down evaporation from its lungs by as much as 25% by remaining in its burrow during the heat of the day. Many animals respond to drought by seeking out a damper or moist environment. The earthworm is a good example of an animal which burrows deeper when the surface soil is dry. In normal circumstances, the earthworm lives in soil which is so moist that can in effect be regarded as a fresh water animal. The nephridium of the earthworm, which is an excretory organ gets rid of surplus water and conserve salts. Some animals go into a state of dormancy during the summer or dry season. This phenomenon is known as aestivation. The African and South American lungfish can survive the complete drying up of the swamps in which they live by burrowing into the bottom and encasing themselves in a cocoon of hard mud lined with mucus. They then go into a state of suspended animation until the arrival of the next rainy season six or more months later.

6. By Using Metabolic Water: One of the products of oxidative metabolism(cellular respiration) is water. In their evolution of osmoregulatory adaptations, some desert animals this is an important source of water. The amount of water yielded by oxidative metabolism depends on the food substance being used. When a gram of carbohydrate is oxidized, approximately 0.56g of water is produced, but almost twice a much is formed when a gram of fat is oxidized. For this reason, a kangaroo rat( a desert animal) tends to metabolize fat rather than carbohydrate. In most animals, breathing to obtain the necessary oxygen for the oxidation of fat involves more water loss than can be gained from the metabolic water. The kangaroo rat manages to lose less water than it gains by metabolism— this is achieved by reducing evaporation from its lungs, not sweating and producing highly concentrated urine and very dry feces. In fact, the kangaroo rat regarded as the doyen of desert animals, produces and retains metabolic water so effectively that it never needs to drink.

7. By having tissues tolerant to water loss: Osmoregulatory adaptations in camels are quite unique. The camel can go for as much as two months without drinking! It is generally believed that water is stored in the hump, however in actual fact fat is stored here and water is obtained from its metabolism. The intriguing fact here is that a camel cannot produce more metabolic water than is lost by sweating and expiration. The question then is how does a camel survive without drinking? The answer to this question was discovered by Knut Schmidt-Nielsen and explains that the camel’s tissues are exceptionally tolerant to dehydration. As the days go along, more and more water is lost and the body fluids become progressively more concentrated, and yet it survives. The osmoregulatory adaptations evolved by the camel is quite amazing! A camel will survive a water loss that reduces its body weight by as much as 30%, which is 10% more than the amount that would be fatal to man. This explains why when a camel drinks it does so with great gusto. Schmidt-Nielsen, who is an authority on the physiology of desert animals reports that a camel which was given water after sixteen days without it, drank 40litres in just 10 minutes!