Pyrometers are instruments used in measuring high temperatures. It has found use extensively in several industrial processes where they are used in temperature monitoring and control. Radiation pyrometers can only measure temperatures above red heat(i.e. 600oC). They can be grouped into two broad classes:– 1. Optical Pyrometers:- Which responds only to visible light, of which the commonest is called a disappearing filament pyrometer. 2. Total Radiation Pyrometers:- Which respond to the total radiation from the hot body, heat or light.

Total radiation pyrometers can be found as:

(i) Fery total radiation pyrometer and

Note: For purposes of clarification and simplicity, we shall denote the apparatus used in this description with letters.

How does an optical pyrometer work? — This type of pyrometer consists essentially of a low power telescope, OE, and a tungsten filament lamp L. the eyepiece E is focused upon the filament F. The hot body A whose temperature is to be found is then focused by the lens O so that its image lies in the plane of F. The light from both the filament and the hot body passes through a filter of red glass G before reaching the eye. If the body is brighter than the filament, the filament appears dark on a bright ground. If the filament is brighter than the body, it appears bright on a dark ground. The temperature of the filament is adjusted, by adjusting the current through it, until it merges as nearly as possible into its background. It is then as bright as the body. The rheostat R which adjusts the current is mounted on the body of the pyrometer, and so is the ammeter A which measures the current. The ammeter is calibrated directly in degrees Centigrade of Fahrenheit. A pyrometer of this type can be adjusted to within about 5oC at 1000oC; more elaborate types can be adjusted more closely.

The range of an optical pyrometer can be extended by introducing a filter of green glass between the object O and the lamp L; this reduces the brightness of the red light. A second scale on the ammeter is provided for use when the filter is inserted.

The scale of a radiation pyrometer is calibrated by assuming that the radiation is black body radiation. If as usual the hot body is not black, then it will be radiating less intensely than a black body at the same temperature. Conversely, a black body which radiates with the same intensity as the actual body will be cooler than the actual body. Thus the temperature indicated by the pyrometer will be lower than the true temperature of the actual, not black, body. A correction must be applied to the pyrometer reading, which depends on the spectral emissivity of the body for red light. The wavelength W, for which the spectral emissivity eW must b known is the average wavelength of light transmitted by the red filter, which is usually about 6500 A.U 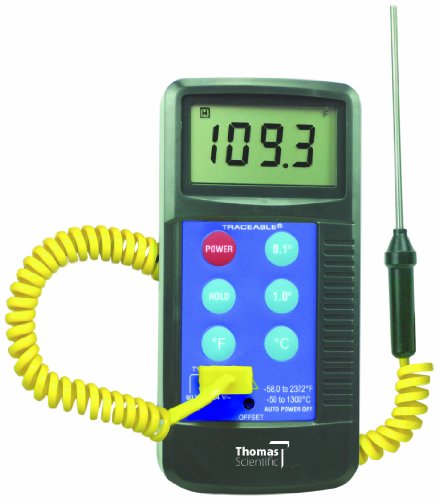