You Are Here: Home » Nutrition and Metabolism in the Frog, Rana Temporaria 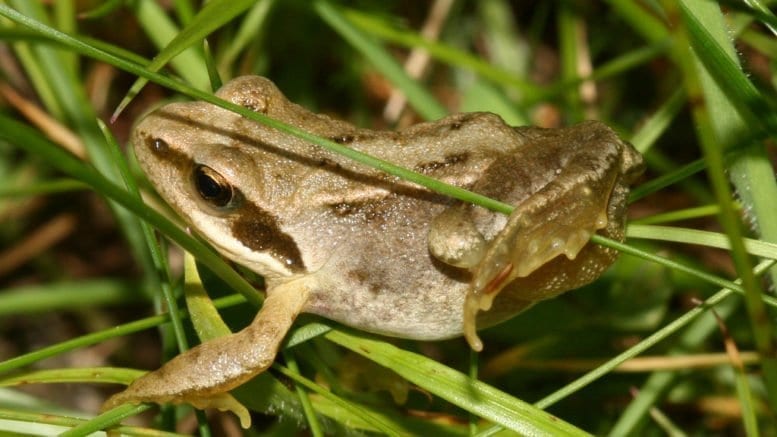 In the study of frog Metabolism and nutrition in rana temporaria, we can conveniently describe this clearly by looking at the alimentary canal which consists of the mouth, buccal cavity, pharynx, oesophagus, duodenum, ileum and the rectum, which opens into the cloaca at the anus.

The mouth is terminal and is very wide, extending back as far as the tympanic membrane on each side. Its wide gap allows for the ingestion of large pieces of food material. The flattened buccal cavity contains the teeth, which are small, sharp-pointed, and conical. They are cemented to the inner side of premaxilla and maxilla. In addition, the vomers bear small patches of teeth which protrude slightly through the dorsal epithelium. All the teeth are similar, a condition known as homodont. If damaged or broken, they are replaced, apparently without limit, i.e. they are polyphyodont. Between the vomers and the upper jaw are two small openings guarded by valves. They are the internal nares and through them air enters the buccal cavity. Two large paler oval areas on the roof indicate the positions of the eyeball which play a part in swallowing. The whole surface of the buccal cavity is ciliated and plentiful mucus glands are present especially on the tongue and on the roof.

The buccal cavity of Rana temporaria merges with the pharynx, which is very ill-defined, but certainly very small when compared with its extent in fishes. Laterally, almost ate the angles of the jaws, are two small openings which lead into the Eustachian tubes. Ventrally in the mid-line is the Glottis, a narrow longitudinal slit which leads into the larynx. Posteriorly, the pharynx tapers abruptly into the oesophagus.

The short oesophagus has longitudinal folds which close it to prevent entry of air to the stomach and yet allow of dilatation when food is being swallowed. Cilia of the buccal cavity, pharynx and oesophagus constantly waft the mucus backward into the stomach. This assists swallowing and ensures that small food particles are not retained in the anterior regions.

The stomach is elongated and thick-walled. Internally it is folded longitudinally, both to allow of distension and to increase the area for secretion of gastric juice. Posteriorly, a slight constriction indicates the position of the pyloric sphincter and the end of the stomach.

The duodenum turns forward and runs parallel with the stomach. Not far from the sphincter it receives the hepato-pancreatic duct. The internal surface of the duodenum bears numerous transverse folds which increase its area for secretion and absorption. It passes imperceptibly into the ileum which has several coils and longitudinal internal folds. Here most of the absorption takes place.

Glands Associated With The Alimentary Canal

Besides the mucous glands which occur along the whole length of the gut, the liver and pancreas have important alimentary functions. The liver is large and dark red in colour. It consists of two large lobes, the left subdivided, and a small median lobe. The gall-bladder is an ovoid sac lying between the main lobe; its outlet is the bile duct which runs through the pancreas into the duodenum. In the mesentery between the stomach and duodenum lies the cream-colored elongated pancreas. It has no separate duct but its secretion are discharged into the bile duct, which becomes a hepato- pancreas duct. The spleen is a spherical red structure lying in the mesentery near the duodenum. Although derived from the embryonic gut, it has no alimentary function.

In the metabolism of the frog rana temporaria, the frog is carnivorous and will ingest a wide variety of small animals. Small prey are captured by the sticky tongue which can be flicked out with extraordinary rapidity. Its action is due to two processes which occur simultaneously. Arising from the posterior cornua of the hyoid body at the level of the larynx are two small hyoglossus muscles which meet in front of the larynx and pass forward to the root of the tongue, into it, and backward to it tips. Contraction of these muscles will flick the tongues over in a wide arc. At the same time as this occurs, a large lymph sac in the floor of the mouth is suddenly filled. The prey adhere to the sticky tongue which is just as suddenly withdrawn by contraction of its own muscle. Larger prey are gripped by jaws, escape being prevented by the backward curvature of the sharp teeth. Swallowing is effected by upward pressure of the floor of the mouth and downward pressure by the eyeballs, followed by peristalsis in the oesophagus.

Presence of Food by Peristalsis in the Oesophagus

Presence of food in the stomach stimulates the secretion of gastric juice, a fluid with PH 2.2; in the upper stomach it contains pepsin and in the lower stomach, hydrochloric acid. Rhythmical contractions of the muscle churn the food and mix it thoroughly with the gastric juice.

Thereby, proteins are partly broken up into peptones by the action of pepsin. Periodically, the pyloric sphincter opens and small portion of food are ejected into the duodenum. Here the bile, the pancreatic juice and the succus entericus, act very much as in mammals, with the result that amino-acids are produces form proteins, hexose sugars from carbohydrates, fatty acids and glycerol from fats. The amino acid and hexose sugars are absorbed into blood capillaries to be taken to the liver in the hepatic portal vein. Fatty acids and glycerol are absorbed into the lacteals and taken finally into the blood by the lymphatic system.

Reserves of food are stored in the liver and in the fat bodies just anterior to the kidneys. In late summer and autumn, the liver becomes swollen and light in color. It is gradually accumulating glycogen and fat for use during the hibernation period. In spring, the reserves are practically exhausted, and the liver is small and darker in color. The fat bodies are lobed structures attached to the anterior borders of the kidneys. The food supplies they accumulate are chiefly utilized by the sex glands, especially in the female.

Nervous System and Coordination in Frogs

Respiratory Quotient and the Measurement of Metabolism

Be the first to commenton "Nutrition and Metabolism in the Frog, Rana Temporaria"