You Are Here: Home » Nepenthes and Sarracenia --- The Pitcher-Plants 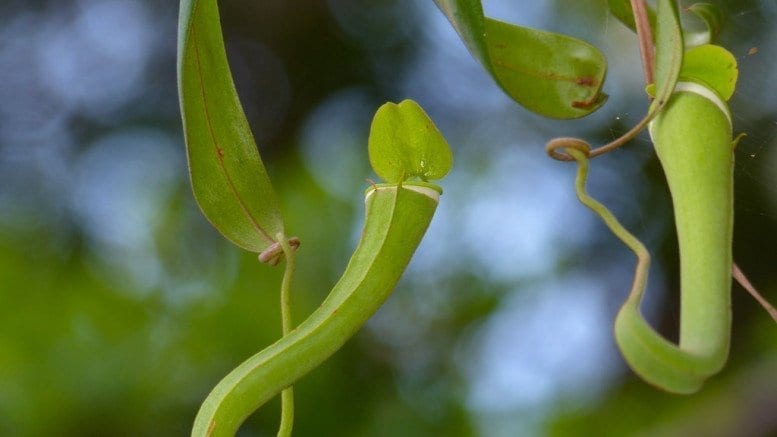 The ‘pitchers’ are formed from modified leaves. In the Nepenthes species, only the terminal portion of the leaf is modified. From a lowermost blade the midrib is continued as a tendril-like organ which then expands into a hollow container, closed when young by the ultimate tip of the leaf, but open when fully mature. The midrib subtending the pitcher may act as a tendril, and by cooling around neighboring vegetation, support the pitcher and keep it upright. In the Sarracenia species, the whole leaf is modified into a long conical container, also closed by a lid when young.

In the lower half of a pitcher in Nepenthes is a watery fluid secreted by hairs on the walls, but above this, the wall is quite smooth and covered by minute waxy scales. The insect prey is presumably attracted by a sugary secretion of the lid, outer walls and mouth of the vessel, and having once crawled over the rim is unable to find foothold on the waxy scales which slide freely over one another, and so it drops into the fluid. Here, enzymes secreted by the pitcher, aided possibly by bacteria, digest the animal and nutritive compounds are absorbed. The pitchers of the Sarracenia plants functions in a comparable way, as do those of the species Cephalotus follicularis, a native of Australia.

Nepenthes and Sarracenia — The Pitcher-Plants