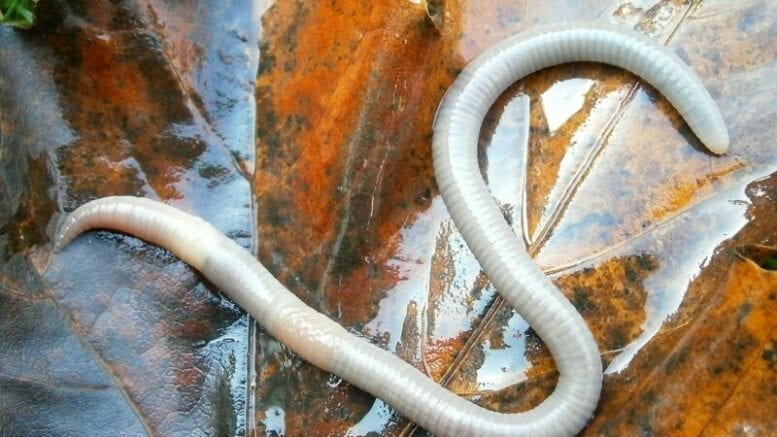 Movement and behavior in earthworm arise from Axons. Axons from sensory cells in the epidermis or muscles pass into the central nervous system, where they make synapses with both motor neurons and internuncial neurons. The motor cells convey impulses out to muscles of the same segment. The internuncial neurons convey impulses up and down the cord to motor neurons of adjacent segments.

During locomotion there are two routes of stimulation of the segmental muscle. The contraction of longitudinal muscles in one segmental activities the stretch receptors in the muscles of the next segments. The axons of these stretch receptors pass into the central nervous system and make synapses with both motor and internuncial neurons. The axons of the motor neurons pass out to stimulate the muscles of that particular segment. Thus stimulation of successive segmental muscles can pass by either of two routes. If a worm is cut in half and then stitched together, movement will continue normally, this shows that mechanical stimulation across the gap is quite effective. On the other hand, if the worm is incompletely severed with only the nerve cord remaining intact. And if then the segments in front of and behind, the cut are securely pinned down the segments posterior to the cut. This shows that the local reflex arcs are also sufficient of themselves. During movement both routes are probably used.

The cerebral ganglia, as in the planarians, mainly provide concentrations of internuncial neurons for relaying to effectors, impulses perceived by anterior sensory cells and organs. If the cerebral ganglia are removed, movement continues, even in spite of obstacles which make it ineffective. Hence we infer that these ganglia can inhibit movement and behavior in earthworm when necessary.

The giant fibres consist of many smaller fused fibres, and they contain a peculiar oblique synapse in every segment. The two lateral fibre make connexions with each other and with ventral giant cells only. It has been shown that the lateral fibres conduct impulses from anterior to posterior only, while the median fibre conducts impulses only forward. Through the agency of these fibres, rapid and almost instantaneous contraction of all the longitudinal muscles is effected. An obnoxious stimulus at the anterior end will stimulate and action potential wave passing backward in the lateral fibres, and such a stimulus at the posterior region will send the wave passing forward in the median fibre.

In studying behavior in earthworm, we must realize that earthworms are very sensitive to light: they are negatively phototactic to light of very low intensity. Ultra – violet rays are lethal to them, and that is the principal reasons why dead earthworms are seen in puddles after heavy rain. If they are shielded from the light, the worms can live for a long period in water or in moist air. A strong touch stimulus at the front causes immediate protrusion of the chaetae in the posterior region and simultaneous violet contraction of all the longitudinal muscles so that the major part of the worm shrinks backward suddenly. Similarly a strong stimulus at the posterior end will cause the reverse procedure.

READ MORE:  Complete Description of the Morphology of False Fruits

They are sensitive to temperature changes, their reaction to very low an very high temperatures being to burrow more deeply. They also react to humidity conditions and do not often come to the surface on dry or windy nights. On warm humid nights, they are to be seen in plenty, by the light of an electric torch, but the watcher must tread warily since they are very sensitive to vibrations. The worms also possess olfactory sense: they consume certain types of decaying leaves in preference to others: they prefer carrot leaves to clearly, and celery to cabbage. The sensory cells concerned appear to lie around the mouth or just inside the buccal cavity.

Be the first to comment on "Movement, Coordination and Behavior in Earthworm"