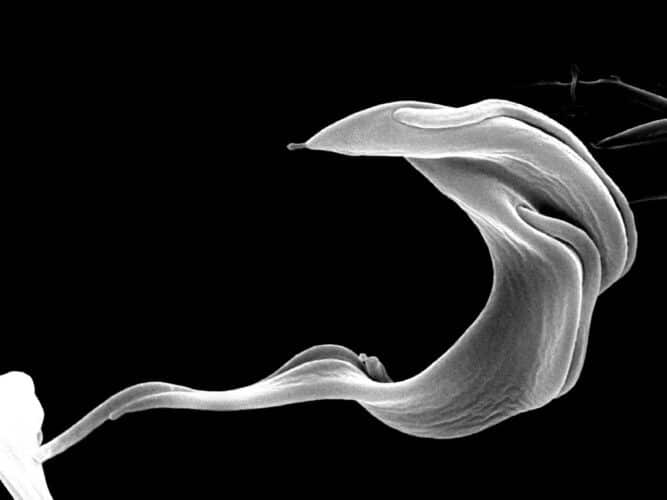 Valentine was the first to discover Trypanosoma in Trout blood. Gruby discovered the genus, and Lewis discovered it in rat blood. Evans and Bruce isolated Trypanosoma parasites from the blood of horses, camels, and cats. Forde (1901) discovered this parasite in human blood.

Dutton confirmed it once more (1902). Castellani discovered this parasite in human cerebrospinal fluid. Then, Bruce and Nabarro established the link between sleeping sickness and this parasite. Bruce also discovered that the tsetse fly transmits the disease.

Trypanosoma species have been reported from Central and West Africa, Nigeria, the Congo, and Central America. Because the insect vector lives in these areas, areas near rivers and lakes with low marshy land have the highest incidence of infection.

Trypanosoma gambiense is a parasite that lives in man’s blood, lymph, lymph nodes, spleen, and cerebrospinal fluid, as well as the intestine of the blood-sucking fly Glossina palpalis (Tsetse fly).

Trypanosoma gambiense has a slender, elongated, colorless microscopic body that is sickle-shaped and flattened at both ends. The anterior end is more pointed than the blunt posterior end. It has a body length of 15 to 30 microns and a width of 1 to 3 microns. The shape and size of its body change depending on the form in which it exists.

Trypanosoma gambiense Polymorphic Forms: Polymorphism is defined as the quality or state of existing in or assuming different forms.

Trypanosoma gambiense has multiple forms. Hoare (1966) discovered up to six morphologic stages in the life cycle of various Trypanosoma species.

These forms were named primarily based on the arrangement of the flagellum, its origin, and its path through the body. However, in the life cycle of the various Trypanosoma species, two or more such forms occur in one or both hosts.

The following are some polymorphic forms:

It has a nucleus and a small, oval or rounded body. Basal granule and kinetoplast in the form of reduced dots placed in front of the nucleus. Flagellum is reduced, fibre-like, and embedded in the cytoplasm; there is no external flagellum.

It has a short, elongated, stumpy body. The basal granule and kinetoplast are located in front of the central nucleus. From basal granules, a long flagellum emerges and becomes free anteriorly. Undeveloped undulating membrane

It has a long and slender body. The basal granule and kinetoplast are located at the back of the body. The flagellum is large and free anteriorly. The undulating membrane has matured.

Respiration is essentially anaerobic because it occurs in an oxygen-free environment. The absorbed glucose goes through glycolysis to release energy for metabolic activities.

The metabolic waste products are directly diffused out into the host’s external environment via its pellicle or general body surface, i.e., blood and lymph. Because of its parasitic mode of habit, the osmoregulatory mechanism is completely lacking.

T. gambiense reproduces asexually through longitudinal binary fission. This species does not have sexual reproduction.

The basal granule (blepharoplast) initiates the longitudinal binary fission, which is followed by the kinetoplast.

Following that, a new flagellum forms along the undulating membrane’s margin. The nucleus then divides, followed by the longitudinal division of the cytoplasm, which begins at the anterior end and extends backwards until the daughter individuals separate. The parasites multiply in the blood of the vertebrate host through repeated division until the blood is swarmed with them.

An intermediate host, a blood-sucking fly called Glossina palpalis, affects transmission from one vertebrate host to another (Tsetse fly).

There are two modes of transmission:

When a tsetse fly (carrier fly) bites a man infected with Trypanosoma, some Trypanosomes stick to the fly’s proboscis, and when the fly bites another man, the Trypanosomes enter his blood, as long as the time between bites is less than 24 hours.

When a fly sucks the blood of an infected man, the parasites, along with the blood, enter the fly’s midgut and multiply for two days. Parasites can only be inoculated in the blood of another man after passing through a series of stages. Cyclic transmission is the name given to this type of transmission.

The bite of an infected fly is usually followed by itching and irritation near the wound, as well as the development of a local dark red lesion. The parasite multiplies and absorbs nutrients from the blood. After a few days, fever and headache appear, recurring at regular intervals, along with increasing weakness, weight loss, and anemia.

The symptoms of its infection include the development of lethargic conditions and the recurrence of fever.

Trypanosomiasis is caused by Trypanosoma gambiense, which is most commonly known as sleeping sickness, which progresses to coma and eventually death. Trypanosoma causes two types of diseases with symptoms that are essentially identical. These are sleeping sicknesses in the Gambia and Rhodesia.

The diagnosis is confirmed by examining fresh or stained peripheral blood, cerebrospinal fluid obtained via lumbar puncture, or extracts of enlarged lymphatic glands.

Arsenic and antimony compounds were previously used to treat trypanosomiasis, but they are now rarely used except in late stages when the parasites have infiltrated the central nervous system.

Bayer 205 (also known as Antrypol, Germanin, or Suramin) and Pentamidine or Lomidine are now widely used to treat and prevent human infections. These drugs have low toxicity, are effective in treatment, and can keep an infection at bay for several months.

The following precautions are recommended to avoid parasite infection: