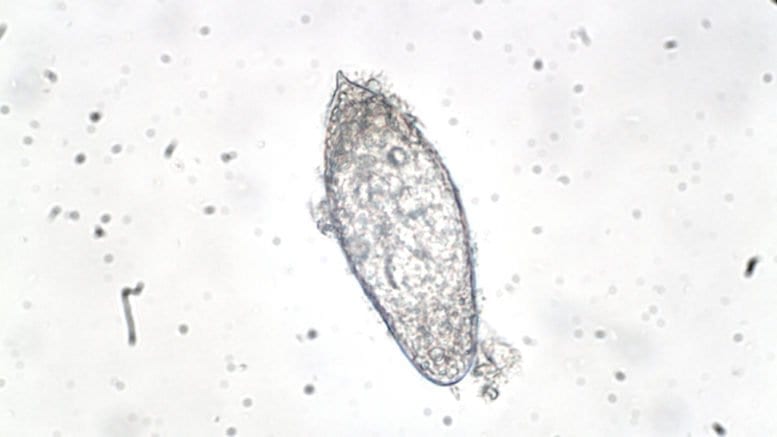 (a)     Habitat:  Adults in the portal vein and its radicles, and especially the vesical plexuses of man, but occasionally in rodents and baboons.

(b)     Eggs are found in urine, rarely in faeces and infective only to snail.

(c)     All the larval stages occur in fresh-water snails, viz Bulinus truncates and other species of the genus throughout Africa, Planorbarius metidgens in Morocco and Portugal, and Ferrissia tenuis in India.

(d)     Infective cercariae escape from the mollusk and have a short free-swimming life in water. They penetrate the unbroken skin of man, mainly, and certain rodents and baboons.

Morphological Characters: In both sexes the mouth opens into an oesophagus which is surrounded by glandular cells; the oesophagus extends from the mouth to the ventral sucker, and shows two dilations. At the anterior margin of the ventral sucker it bifurcates into two branches. In the male, these again untie in the posterior third of the body into a common trunk, which pursues a wavy course and terminates blindly posteriorly.

The male worm is colorless, and measures about 1 cm in length. Owing to the fact that is lateral margins are curved ventrally, it presents a cylindrical appearance. Like other distomes it possesses two suckers, a rather small oral sucker surrounding the mouth which it situated at the anterior extremity of the body, and a larger, pedunclated, ventral sucker, placed a little distance behind the oral sucker. The gynaecophoric canal extends from the posterior extremity of the body, forward as far as the ventral sucker. The cuticle, on the dorsal surface, is covered with small tubercles, and minute spines occur on the suckers and in the gynaecophoric canal. The genital organs pore is situated behind, but close to, the ventral sucker. The genital organs consist of four angular testes placed close together, dorsally, just behind the ventral sucker. From each tests there arises a very short vas efferents. These unite into a common duct, the vas deferens, also extremely short, which dilates at once into a comparatively large, globular, seminal vesicle, from which it runs to the genital pore; copulatory organs are absents.

The female worm is cylindrical, thread-like, often reddish-black in color, and longer than the male, measuring about 2cm in length. The extremities are pointed. The skin is not tuberculated as in the male except as the extremities; minutes spines, size. The ovary is a small elongated organ situated in the hinder half of the body; from its posterior extremity the oviduct arise and at once turns, and runs anteriorly. The vitelline glands occupy the posterior fourth of the worm, extending from a point immediately behind the ovary, to the posterior extremity of the body. From the anterior extremity of the vitelline glands the vitelline duct arises, and running parallel with the oviduct, unites with it just in front of the ovary. The shell-gland surrounds the junction of these two ducts; the common duct dilates into an ootype, and narrowing, runs forward as the uterus to the genital pore, situated just posterior to the ventral sucker.

The eggs are compact, elongated spindles, dilated in the middle, and they measure about 140cm in length by about 50cm in breadth. At one pole they bear a short, stout, terminal spine.

The miracidium is highly organized. It bears an anterior boring papilla from which arises a primitive digestive sac lying between two small penetration glands. There are, in addition, two large unicellular penetration glands, a minute central nervous system, and a well-developed excretory system. The posterior half of the miracidium is occupied by a mass of germ-cells. The sporocyst is an elongated thin-walled, sac-like body.

The cercaria measure 400pm in length including tail, by 80pm in breadth and is also highly organized. It consists of an anterior, somewhat oval, body, and a tail-stem of about the same length which bifurcates terminally. In the cercariae of the human schistosomes the tail fork measures less than half the length of the tail stem. The surface is covered with extremely minute spines. Anteriorly, there is a large oral sucker, and a little in front of the junction of the body and the tail stem, the prominent ventral sucker occurs. Near the middle of the body, after emergence from the snail, there are five pairs of unicellular penetration glands, each gland containing a large nucleus; the anterior two pairs are coarsely granular and easily seen in the living cercariae. Some of these glands secrete Iytic ferments which enable the cercaria to penetrate the skin of the final host. From each, a duct arises, which runs forward to the margin of the oral sucker.

A mass of cells, situated immediately behind the vented sucker, represents the rudiments of the genital organs.

There is an elaborate excretory system consisting of three pairs of flame-cells in the body, and one pair in the tail. Form each flame-cell, a duct arises; these ducts join together on each side. The two trunks, one from each side, unite into a common duct which runs the length of the tail and, bifurcating, terminates in a pore at the tip of each bifurcation. Shows in detail the anatomy of this cercaria.

Life history. The eggs are passed in urine particularly in the first and last portions of the flow, but on many occasions they occur also in feces. The egg contains, when passed, a ciliated larva know as a miracidium, which has a life-span of about four weeks. This does not hatch in urine, but when the urine is diluted with water the miracidium becomes very active and, about in search of the larval host. While swimming, it rapidly and repeatedly changes shape. Ti can only live up to 36 hours after hatching and dies unless it succeeds in entering the larval host, which is usually a snail of the genus Bulinus. The miracidium penetrates the soft tissues of the snail and, lsing its cilia and other special organs for which it has no further use, it becomes a sporocyst and migrates to the visceral mass. Multiplication of sporocysts occurs to such an extent that the visceral mass of the snail becomes permeated in a week or two with minute, elongated, delicate, tube-like daughter sporocysts. Three weeks or more after infection the sporocysts, instead of producing a further generation of sporocysts, give rise to the final larval form-the cercariae.

Unlike other human digenetic trematodes, no rediae are produced at any time in the life history of the schistosomes, multiplication in the snail taking place in the sporocysts stage.

The cercariae of the three species of Schistosoma dealt with here can all survive for about two days, and penetrate unbroken skin. They differ from each other only minute detail.

While penetrating the skin of man the tail is discarded. The bodies of the cercariae, by means of the Iytic ferments of their penetration glands and their capacity for active movement, pass through the tissues and eventually reach the venous circulation. Finally, in the lungs, they reach the systemic circulation and area carried to the portal system where they become adult.

Pathogenicity. The paired worms migrate from the portal vein to the vesical plexuses where eggs are laid. These pass through the tissues aided by the Iytic ferments secreted by the bladder wall. Here many become calcified, giving rise to the so called “sandy-patch” appearance. Other pass through the mucosa of the bladder and are discharged in urine. The presence of the worm results in an endophlebitis, the lumen of the radicles becoming blocked. Papillomata, in which numerous eggs occur, may develop on the wall of the bladder; the eggs ulcerate through and haemorrhage occurs, and the eggs and blood are passed in the urine. These papillomata may ultimately become malignant. The urethra, seminal vesicles, and ureters, may become involved. The liver and spleen frequently enlarge. Many in-fected persons do not complain but others have pain in the bladder region, in the back, and passage of blood in the urine; if the rectum in also involved, or if alone affected, there may be symptoms of dysentery, with passage of blood and mucus in the feces.

(a) By finding terminal spinned eggs in the urine, more rarely in the feces; eggs are present in greatest numbers in the last part of the urine passed and after exercise.

(b) By examination of rectal tissue removed by biopsy; this is conveniently done using a small-sized Coldlite proctoscope and a sharp aural scoop. A tiny fragment of rectal mucous membrane, about 2 x 2 x 1mm is nipped off with the scoop by pressure against the proctoscope and placed in 1ml of tap water for half an hour. The tissue may then be examined for eggs under the low power microscope by transferring to a drop of water and pressing it between two microscope sliders, or it may be teased out with needles and examined in water under a coverslip, using the low and high powers of the microscope. This test will be found positive in many old infections when (a) and (b) are negative.

Morphology and History of Schistosoma Japonicum