You Are Here: Home » Morphological Description of the Frog – Rana Temporaria 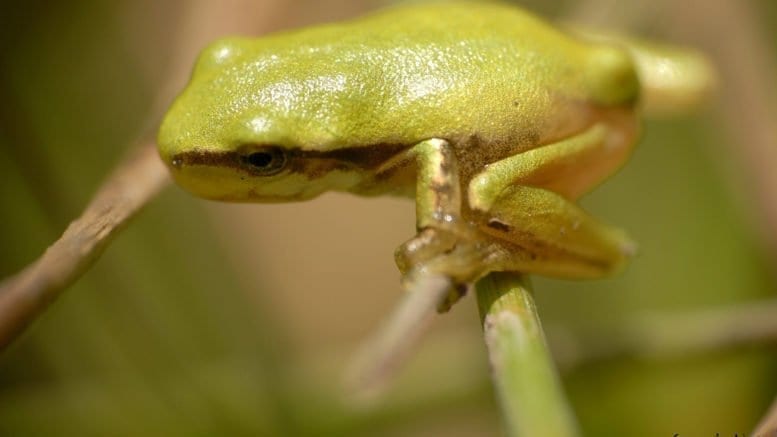 The frog, Rana temporaria is usually selected for study because of its relative abundance and convenient size. Also it illustrates in some measure the changes which took place during the transition from an aquatic to a terrestrial life. It must be clearly understood that the frog is not to be regarded as an unsuccessful or partially successful land animal, but as a true amphibian, equally at home in both media. All modern Amphibia are small animals but very specialized . the larger and more typical members became extinct during the Triassic period.

There are several hundred species included in the genus Rana, the most striking being the golden and green tree frogs and the gliding frogs of Java and Borneo. The species described is the common British grass frog, Rana Temporaria, which differs only in minor details from Rana esculenta, the edible green European frog, and from Rana pipiens, the commonest North American frog.

Rana temporaria favors damp situations and is usually to be found in grass near water, in damp ditches, and frequently, swimming in ponds or streams. It is carnivorous, feeding on a variety of small animals, which it swallows whole. During the winter, it hibernates in mud-holes, often being completely covered. In spring, the frog congregates in shallow ponds, the males croaking loudly, and mating takes place. The sexes are separate, fertilization is external and development is also external. The process from fertilization to adult frog takes about three months.

It has however some power of changing its color slowly, to blend more harmoniously with the background. The body is about 10 – 11 cm long when full-grown and is squat, being flattened dorso-ventrally. There is no neck, the head passing imperceptibly into the trunk, and there is no tail.

The head tapers in front and is bluntly rounded; the wide mouth is terminal. Above the mouth are a pair of small holes, the external nares, which leads into the nasal sacs. The eyes are large and protruding; they lie almost dorsally but face laterally. Eyelids are poorly developed, the upper being stiff and immoveable, while the lower represents a nictitating membrane. Special muscles retract the eye into head and then the nictitating membrane can be moved up to cover it. Behind the eye is a prominent patch which is the tympanic membrane or eardrum.

The trunk widens laterally and then taper between the hind-limbs to end at the cloaca. About halfway along its length are promonent humps called the sacral prominences. Ventrally, the thoracic region is firm while the abdominal region is soft and yielding to the touch.

The front limbs are short and stout, consisting of an upper arm, a fore-arm, a wrist and a hand which ends in four digits. It supports the front of the body clear of the ground, and in the resting position, the elbow is bent outwards and the hand has its palmar surface downward. The hind-limbs are long, muscular and folded tightly into three regions. The knee points forward and outward, the heel backward and inward, while the ankle and foot form a long segment which lies on the ground. There are five toes joined by thin webs of skin. Except during jumping, the abdominal region is not supported clear of the substratum.

Rana temporaria has a skin that is soft, moist and slippery to the touch. Distinction between the sexes is not very obvious since there are no external genitalia, but the male usually has a more slender body than the female. At breeding times, the female is considerably bloated with eggs, while the male develops a rough black warty patch on the first (pre-axial) finger.

Nervous System and Coordination in Frogs