False fruits are “fruits” in which some floral part or parts in addition to the gynaecium may become part of the unit structure from which the seeds are finally dispersed. The receptacle is commonly incorporated into the “fruit” structure and may become considerably modified from its original form. Hence we may speak of receptacular pseudocarps. The most common modification is that in which the receptacle becomes enlarged and fleshy after fertilization of the ovules. A typical example is the strawberry in which the rue fruits are separate achenes borne on a succulent receptacle. This structure is derived from a hypogynous or only slightly perigynous flower. In the rose hip, the fleshy receptacle forms a flask – shaped container for the achenes within it. Such a “fruit” is derived from a deeply perigynous flower. The pome of the apple and pear can be considered as a receptacular fruit derived from an epigynous flower. In this case the gynaecium is syncarpous and the inner wall of each carpel, i.e., the endocarp, becomes tough and fibrous whilst the loculi are forced apart by wedges of fleshy tissues formed from the outer layer of the carpel walls. The whole of this partially tough, partially fleshy, gynaecium is fused to a wide layer of succulent tissues derived from the receptacle, which completely encloses it. The pome thus shows certain features in common with both drupe and berry. The “pips” inside are seeds. Pomes may also be seen in hawthorn, service tree, quince and medlar. 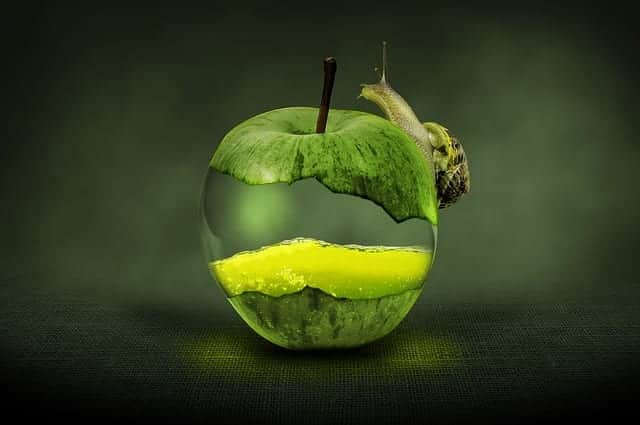 There are still more complicated false fruits in which a whole inflorescence, not just a single flower, may form a single but complicated structure. These may be referred to as infructescences or inflorescent fruits. A typical example is the syconus of the fig. in this case the large number of very tiny flowers are formed on the inside of a hollow inflorescene axis. Each female flower produces a single small drupe when fertilized, and the acis develops as a succulent container to form the fig. Each tiny fig “pip” therefore corresponds to a plum “stone”. Another example of false fruits is the sorosis of the pineapple in which a whole inflorescence on a fleshy axis becomes a fused succulent mass including all the floral parts. The mulberry is derived from a short spike of flowers and is comparable in structure with the pineapple since the perianth of each flower becomes fleshy as well as the ovary. The final “fruit” is not unlike a head of drupelets in appearance.