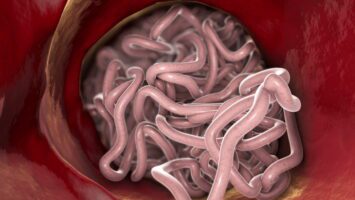 Trichinella spiralis is a viviparous nematode parasite that causes the disease trichinosis in rodents, pigs, bears, hyenas, and humans. It is sometimes referred to as the “pork worm” because it is commonly found in undercooked pork products. It is not to be confused with the closely related pork tapeworm. 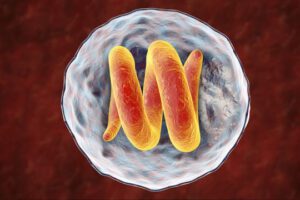 The anus can be found at the terminal end, and each side has a large copulatory pseudobursa. Trichinella spiralis females are about twice the size of males and have a terminal anus. The vulva is found close to the esophagus. The posterior portion of the female uterus contains developing eggs, while the anterior portion contains fully developed juveniles. 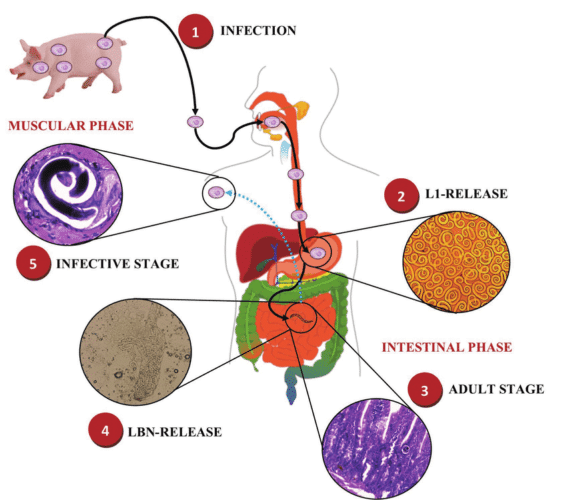 Trichinella species, the world’s smallest nematode parasite, has an unusual lifecycle and is one of the most common and clinically important parasites.

Trichinella spiralis can spend the majority of its adult life in human intestines. T. spiralis adults begin their lifecycle by invading a pig’s intestinal wall and producing larvae that invade the pig’s muscles. The larval forms are encapsulated as a small cystic structure within the infected host’s muscle cell. When another animal (possibly a human) consumes the infected meat, the larvae are released from the nurse cells and migrate to the intestine, where they burrow into the intestinal mucosa, mature, and reproduce.

Infected animal tissue with the parasite that causes the disease trichinosis.

The first symptoms may appear 12 hours to two days after eating infected meat.

Adult worm migration in the intestinal epithelium can cause traumatic damage to the host tissue, and the waste products they excrete can trigger an immune response.

The inflammation that results can cause symptoms such as nausea, vomiting, sweating, and diarrhea. Facial edema and fever may appear five to seven days after the onset of these symptoms. Intensity of muscular pain, difficulty breathing, weakening of pulse and blood pressure, heart damage, and various nervous disorders may occur ten days after ingestion, eventually leading to death due to heart failure, respiratory complications, or kidney malfunction, all caused by larval migration.

Trichinosis can be detected using a muscle biopsy. There are also several immunodiagnostic tests available. Patients are typically treated with mebendazole or albendazole, but the efficacy of such medications is unknown. Analgesics and corticosteroids can be used to alleviate symptoms.

In pigs, ELISA testing can be used to diagnose diseases. Trichinella infections can be treated and prevented with anthelmintics.

Control and prevention of infections caused by Trichinella spiralis

Trichinosis (trichinellosis) is an infection caused by the tissue-dwelling roundworm Trichinella spiralis. The following methods can be used to prevent and control it:

According to the research, there is no known economic benefit to humans from Trichinella spiralis.

Humans may be more familiar with this parasite because of the disease it causes. Trichinosis, trichomoniasis, or trichinellosis are all names for this disease. Humans can become infected with this parasite by eating infected meat. In most cases, humans contract the disease after eating raw or undercooked pork. Trichinosis is a chronic health problem in many parts of the world because raw sausage is considered a delicacy. This disease’s symptoms may include:

1. Weakness and muscular twitching caused by the female worm depositing the juvenile.

2. Edema around the eyes, intense muscular pain, changes in muscle function, difficulty breathing, and a persistent fever are symptoms of the juvenile’s migration and penetration of muscle tissue.

3. Swelling of the extremities, damage to the heart, nervous system, and other organs, puffiness in the face, and pneumonia.