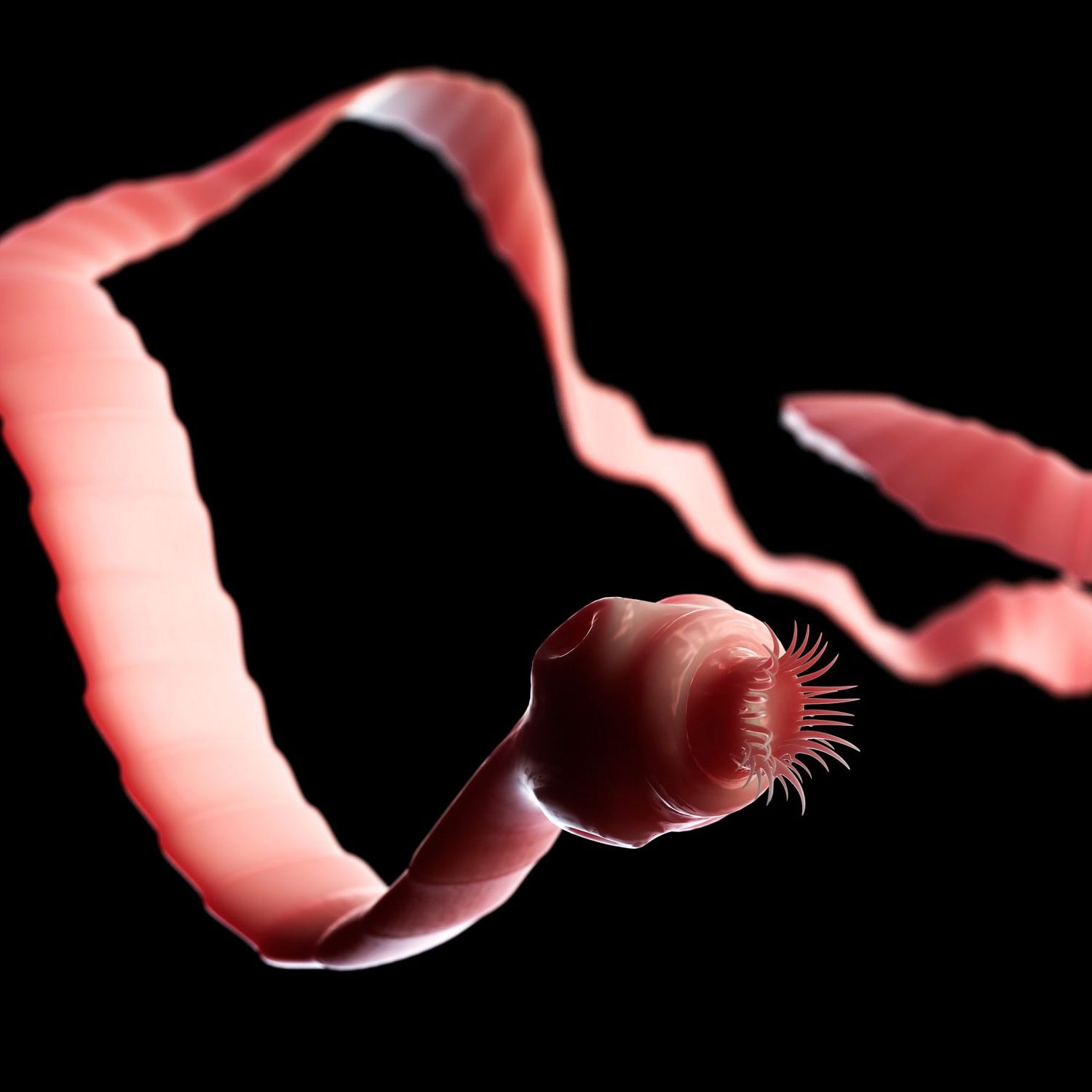 Taenia saginata, also known as the beef tapeworm, is a zoonotic tapeworm of the order Cyclophyllidea and the genus Taenia.

It is an intestinal parasite that causes taeniasis (a form of helminthiasis) in humans and cysticercosis in cattle.

It can be found all over the world, but it is most common where cattle are raised and beef is consumed. Africa, Europe, Southeast Asia, South Asia, and Latin America are the most common places to find it.

Humans are usually infected after eating raw or undercooked beef that contains the infective larvae known as cysticerci.

Human embryonated eggs, known as oncospheres, are released with feces and transmitted to cattle via contaminated fodder. Oncospheres transform into infective cysticerci inside cattle muscle, liver, and lungs.

Except for a few details, T. saginata is structurally and biologically similar to other human tapeworms such as Taenia asiatica and Taenia solium. It is typically larger and longer, with more proglottids, testes, and uterine branching. In addition, unlike other Taenia, it lacks an armed scolex. It, like the other tapeworms, causes taeniasis in the human intestine but not cysticercosis. Its infection is clinically asymptomatic and relatively harmless. 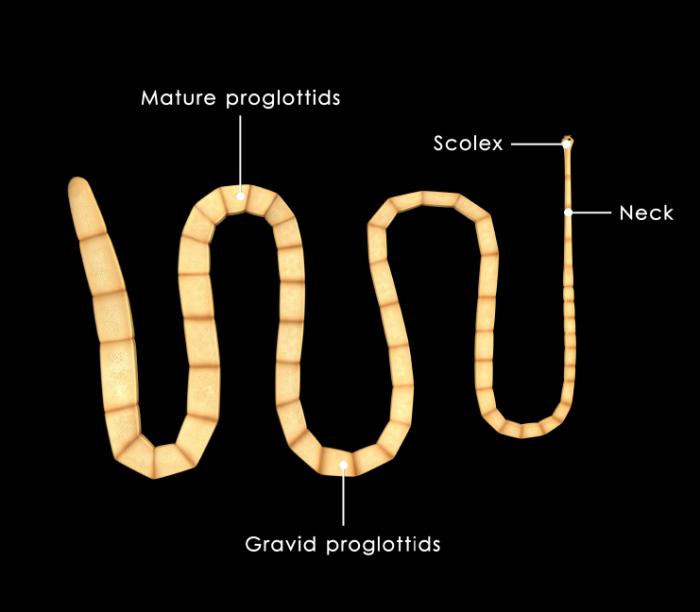 Taenia saginata is the genus’s largest species. An adult worm is typically 4 to 10 m long, but can grow to be very large.

Their cestode bodies are flattened dorsoventrally and heavily segmented and a tegument completely covers it.

The body is white in color and is divided into three sections:

T. saginata lacks a digestive system, mouth, anus, and digestive tract. It obtains nutrients from the host via its tegument, which is completely covered with absorptive hair-like microtriches. It is also an acoelomate, as it lacks a body cavity.

Each mature proglottid contains muscular layers as well as complete male and female reproductive systems such as the tubular unbranched uterus, ovary, genital pore, testes, and vitelline gland. The uterus contains up to 15 side branches filled with eggs in the gravid proglottid.

The life cycle of T.saginata 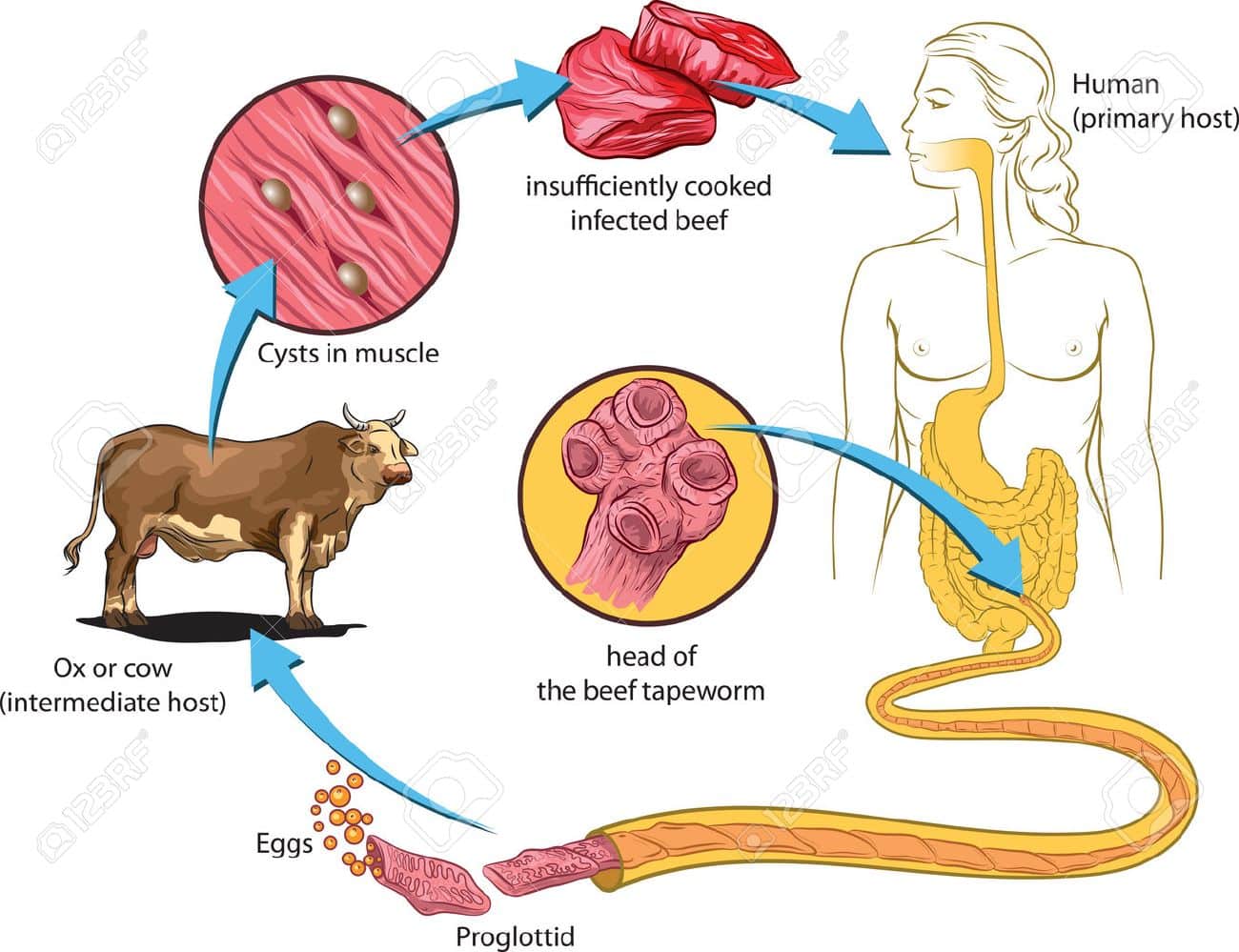 When cattle consume contaminated food, they acquire the embryonated eggs, known as oncospheres. Oncospheres enter the duodenum, the anterior portion of the small intestine, and hatch there under the influence of gastric juices. The embryonic membranes are removed, resulting in the release of free hexacanth (“six-hooked”) larvae. They attach to the intestinal wall with their hooks and penetrate the intestinal mucosa into the blood vessels. Within 70 days, the larvae can move to all parts of the body via the general circulatory system and eventually settle in skeletal muscles. Inside the tissue, they unhook and instead form a protective cuticular shell known as the cyst. As a result, they develop fluid-filled cysticerci. Cysterci can also develop in the lungs and liver. The cysticercus inner membrane quickly develops numerous protoscolices (small scolices) that are invertedly attached to the inner surface. To distinguish it from the cysticercus of T. solium, cysticercus cellulosae, the cysticercus of T. saginata is named cysticercus bovis.

READ MORE:  Air Pollution and the Damaging Effects of Pollutants

Humans become infected with infective cysticerci after eating raw or undercooked meat. When the inverted scolex reaches the jejunum, it is evaginated to the outside in response to stimuli from the host’s digestive enzymes. It attaches to the intestinal wall using the scolex. The larvae mature into adults in 5 to 12 weeks. Adult worms can live in the host for up to 25 years. Typically, only one worm is present at a time, but multiple worms have been reported. Self-fertilisation produces zygotes in each mature proglottid, which divide and differentiate into embryonated eggs known as oncospheres. The oldest gravid proglottids detach with thousands of oncospheres.

Gravid proglottids are shed individually. In some cases, the proglottid ruptures inside the intestine, releasing the eggs. Peristalsis removes free proglottids and liberated eggs into the environment. Proglottids are motile on the ground and shed eggs as they move. These oncospheres can survive in the external environment for several days to weeks in sewage, rivers, and pastures.

Surgery can be used to treat intestinal obstruction in humans. The tapeworm can also expel antigens that cause an allergic reaction in the host. It can also cause ileus, pancreatitis, cholecystitis, and cholangitis in rare cases. Taenia saginata has been linked to gallbladder perforation in some cases if left untreated. Adult Taenia saginata worms can live in the host for up to 25 years, and most infections last 2 to 3 years if left untreated.

Taenia saginata remains asymptomatic because the organism does not produce cysticerci in humans. As a result, there is no evidence of cysticercosis in humans. Cysticercosis is a parasitic tissue infection that typically affects the brain and muscle tissues. Taeniasis causes weight loss, pain, and intestine blockages, which can be life-threatening.