The cranium of a dog’s skull is almost entirely composed of three rings of bones, the occipital, parietal and frontal rings. The occipital ring of a dog skull consists of the basi-occipital, paired exoccipitals and the supraoccipital. Enclosed by these bones is the foramen magnum at the sides of which are two occipital condyles for articulation with the atlas. A basisphenoid, paired alisphenoids and parietals make up the parietal ring. Between the alisphenoids and the occipital ring the cranium is completed latero-ventrally by the squamosal and the auditory capsule. Dorsally the parietal are separated by a narrow interparietal. The frontal ring consists of the presphenoid ventrally, two lateral orbito-sphenoids and two very large dorso-lateral frontals. In front, the cranium is closed by the cribriform plate perforated by openings for the olfactory nerves.

The large nasal cavities of a dog’s skull are roofed over by narrow nasal bones, the floor consists of the vomers, and the sides, of the premaxillae and maxillae. Separating the cavities is the mesethmoid which is prolonged into cartilage anteriorly. Scroll- like delicate turbinals occupy a large part of each cavity; they are ingrowth of the nasal, maxillary and ethmoid bones and serve to increase the area of the epithelial layer. The optic capsule is represented by the sclerotic coat of the eye-ball; the eye face forward and are lodged in the front part of a large cavity formed by outer side of the eye and the masticatory muscles behind it, is the zygomatic arch, curved widely outward. It consists of the jugal in front and the zygomatic process of the squamosal behind. 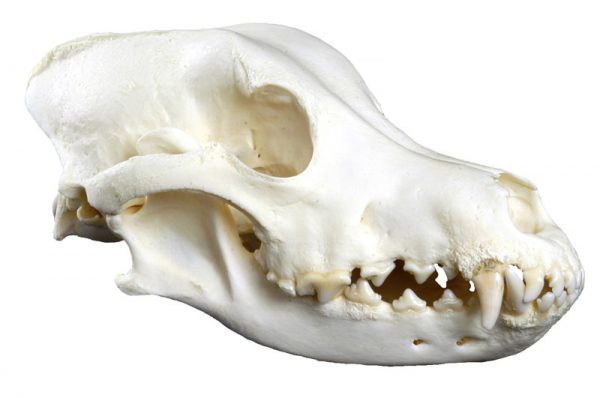 Embedded in the wall of the cranium of a dog’s skull, below the squamosal, is the periodic bone, which enclose the membranous labyrinth of the inner ear. Outside the periodic is the tympanic bone consisting of a short bony external auditory meatus and a swollen tympanic chamber. Within the chamber lie the three auditory ossicles, the malleus (articular), incus (quadrate) and stapes (columella, hyomandibula).

Forming a new roof to the buccal cavity are the palatal ingrowths of the premaxilla, maxilla and palatine. The inverted gutter formed behind the hard palate by the palatines and pterygoids is covered by flesh during life to form the soft palate. Thus the internal nares open into the pharynx by a single opening, and the animal can now deal with food in the mouth without interference with breathing. The arrangement of the bones in this nasal region has also separated an upper olfactory chamber from the narial passage. From above there is the sequence, olfactory chamber, vomer, narial passage, palate buccal cavity. 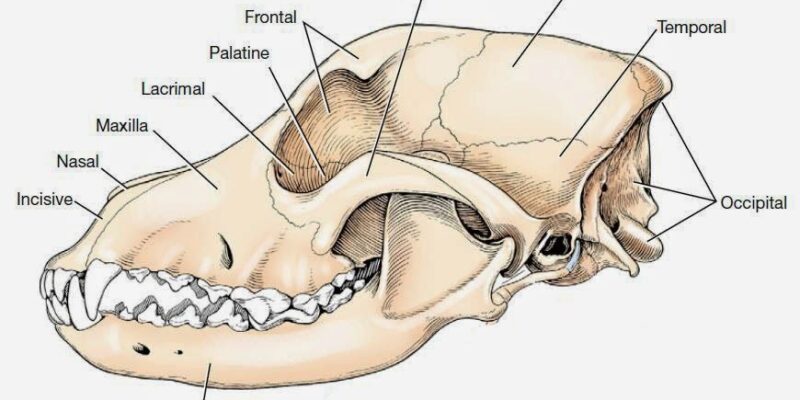 Of the original mandibular arch of a dog skull, the palatines and pterygoids are still in contact with each other, forming the sides of the posterior part of the narial passage, but the quadrate is now far removed as the incus of the middle ear. The upper jaw consists of premaxillae bearing the incisor teeth and maxillae bearing canine, premolar and molar teeth. A large part of the side of the facial region of the skull of a dog is formed by upward extension of the maxilla. Two fused bones, dentaries form the lower jaw which articulates by articular processes with the glenoid fossae beneath the squamosals. A flattened coronoid process project upward within each zygomatic arch. It serves for attachment of the powerful masticatory muscles which are fastened dorsally to the cranium.