Investigation of radioactive disintegration series shows that more than one element can occupy the same position in the periodic table. Such elements must have the same atomic numbers, but they are not absolutely alike for they have different mass numbers. Soddy, as a result of his work on radioactivity, called such element isotopes. They have the same atomic number, but different mass numbers, or, in other words, the same arrangement of electrons and the same number of protons, but different numbers of neutrons in the nucleus. This method of positive ray analysis for detecting isotopes was further developed by Aston using an apparatus known as a mass spectrograph, and by Dempster, and others, using a mass spectrometer.

The existence of isotopes of non-radioactive elements was shown by positive ray analysis. Positive rays, first discovered by Goldstein in 1886, are formed in a discharge tube as well as cathode rays, and may be observed by using a tube with a perforated cathode. If this is done, the radiation passing through the holes in the cathode is found, by the effect of electric and magnetic fields, to consist of positively charged particles much heavier than the electrons of cathode rays. 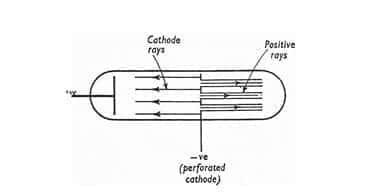 Measurement of the charge/mass ratio for positive rays obtained in tubes containing different gases indicates that the rays are made up of positively charged atoms or molecules formed by loss of electrons from the atoms or molecules of the gas in the tube.

Application of magnetic and electric fields enables the various particles in the positive rays to be ‘sorted out’ according to their weight. Thomson first investigated positive rays from a tube containing neon, of relative atomic mass 20.183, and he found that neon was, in fact, made up of two isotopes, one of mass 20 and one of mass 22.

In the mass spectrograph, positive rays from a discharge tube are passed through two slits, A and B, in an evacuated vessel. The thin beam of rays is then subjected to an electric field between plates P and O, and this causes the beam to be deflected and spread out, because and slower positively charged particles are deflected more than the quicker ones. The spread-out beam is then passed through a diaphragm, D, and between the poles of a magnet, M. the magnetic field deflects the beam in the opposite direction to the deflection caused by the electric field and, once again, the slow particles are deflected most.

By adjusting the relative strengths of the electric and magnetic fields, all positively charged particles of the same mass, irrespective of their different velocities, can be focused on to the same line on a photographic plate at S. 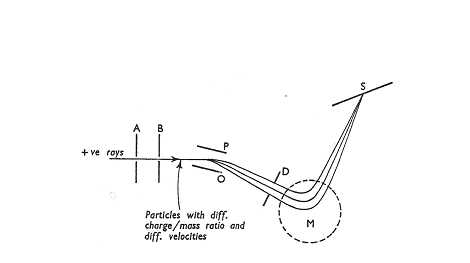 The result has the appearance of a line spectrum, the lines on the plate each corresponding to a particle of definite mass in the positive rays; it is known as a mass spectrum. Moreover, the intensity of each line gives an indication of the relative amount of each particle present, though not very precisely.

As particles originally having widely different velocities are focused by the electrical and magnetic fields, Aston’s method is known as velocity focusing. A mass spectrograph gives a photographic record, and is mainly intended for measuring isotopic masses.

A mass spectrometer differs from a mass spectrograph in three respects. The beam of positive rays is obtained differently, the particles in the beam are accelerated by an electrical field so as to have about the same velocity, and measurement of charge replaces the use of a photographic plate.

The method of focusing is known as direction focusing, and the method has been applied, more recently, by Nier.

Almost all elements have now been found to have stable, naturally occurring isotopes, and many have a very wide variety. Typical examples are given below. 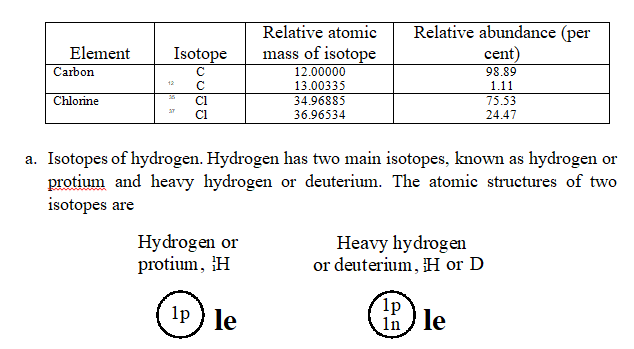 The existence of deuterium was discovered by Washburn and Urey, in 1931, by a careful examination of the lines spectrum of the hydrogen resulting after several liters of liquid hydrogen had been evaporated.

This discovery was followed, in 1932, by discovery of deuterium oxide, or heavy water, D2O or 2H2O, by Washburn and Urey. They found that the residue remaining after water has been almost completely decomposed by electrolysis was rich in deuterium oxide, and almost pure deuterium oxide can now be obtained in large quantities by an extension of this method.

Normal hydrogen contains some deuterium (about 0.015 per cent) and ordinary water contains about the same proportion of heavy water.

A third isotope of hydrogen, known as tritium, can be made, though it is very doubtful if it exists naturally in ordinary hydrogen. Tritium is formed, for example, when the 6Li isotope of lithium is bombarded by a steam of neutrons, 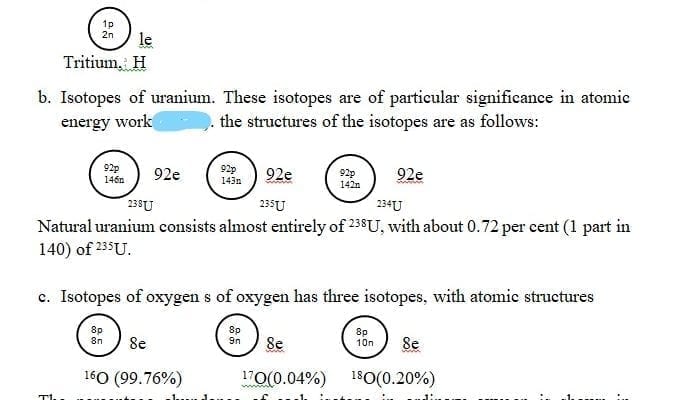 The percentage abundance of each isotope in ordinary oxygen is shown in brackets.