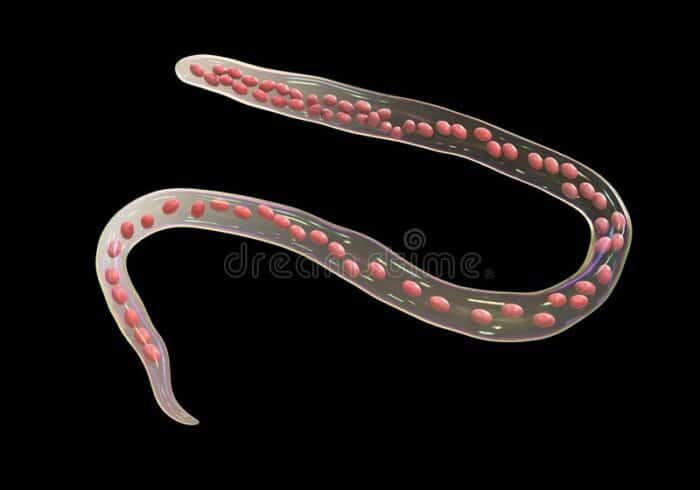 Mansonella ozzardi is an endoparasite that lives in the serous cavity of the human host’s abdomen. It is found in the mesenteries, peritoneum, and subcutaneous tissue.

M. ozzardi, like other nematodes, is a cylindrical, bilaterally symmetrical worm with a pseudocoel, or false body cavity. The cuticle on the parasite’s exterior is a protective layer that allows it to withstand the harsh environment of the human hosts’ digestive tracts.

Females are larger than males in the adult stages of M. ozzardi.

It is a dioecious species, with the female releasing a pheromone to attract males. When the male locates the female, he coils around her over the genital pore. During copulation, the male’s spicules are used to hold the female. The females have ovoviviparous eggs and the male sperm lacks a flagellum. It moves because of its amoeboid-like cell. 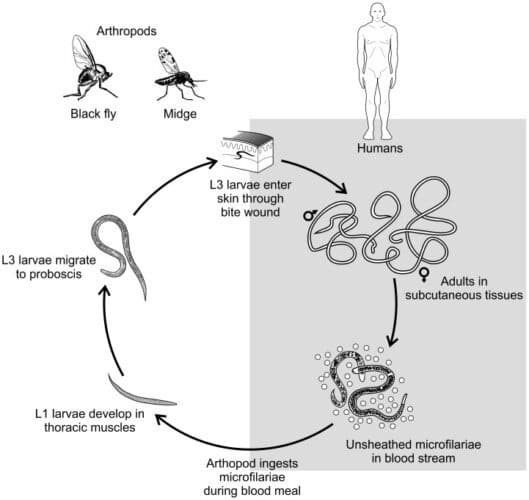 An arthropod (black fly or biting midge) will take a human blood meal and insert its filarial larvae into the human host.

The larvae will then mature into adults, inhabiting the peritoneal spaces and surrounding areas.

Adults will mate and give birth to unsheathed microfilariae. Microfilariae will enter the bloodstream.

An arthropod will consume microfilariae after ingesting blood from an infected human.

The microfilariae in the arthropod will travel from the midgut to the thoracic muscles.

The microfilariae will develop into first-stage larvae in the thoracic muscles.

Later, the microfilariae will mature into third-stage larvae.

The third-stage larvae will move from the thoracic muscles to the proboscis of the arthropod.

M.ozzardi is also suspected of being the source of corneal lesions.

READ MORE:  The 9 Most Deadly Spiders in the World

A microscopic examination is used to identify the M. ozzardi microfilariae in blood samples from infected patients. To see the worms under the microscope, blood smears are usually stained with haematoxylin or Giemsa.

Microfilariae have been found in the skin, so doctors should not rely solely on blood samples. The presence of adult worms can be detected using ultrasound. The parasites in skin biopsies are currently being detected using a polymerase chain reaction-based method developed by researchers.

Because M. ozzardi harbors the endosymbiotic bacteria Wolbachia, doxycycline may be an effective therapy to eliminate adult worms. However, no trials with doxycycline (alone or in combination with ivermectin) for M. ozzardi infection have been conducted.

Ivermectin is the preferred treatment for M. ozzardi infections. It is a strong macrocyclic lactone that binds to chloride channels, allowing chloride ions to enter the affected cells. In M. ozzardi microfilariae, these cells hyperpolarize, resulting in muscle paralysis. This allows host immune cells to adhere to the surface of the microfilariae, facilitating their elimination. Adult worms are not killed by ivermectin.

Because biting midges cannot bite through clothing, residents of the Caribbean should wear long-sleeved shirts and pants to reduce the number of body parts exposed.

Insect repellents could also be used to cover exposed body parts that are not covered by clothing. Communities should also keep the natural vegetation around them in order to reduce the breeding grounds for biting midges.

In South America, the best way to control blackfly populations and M. ozzardi transmission is to apply insecticides designed specifically for blackfly larvae to streams and rivers.

When an insecticide is applied to a specific breeding site, it also kills larvae in breeding sites up to 10 kilometers downstream. Because blackflies can fly hundreds of kilometers with the wind, extensive networks of waterways must be treated with insecticide. Individuals should also avoid using waterways as much as possible.