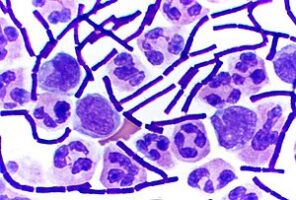 Gram staining is a common technique used in distinguishing two large groups of bacteria based on differences in cell wall constituents. We shall examine the macromolecular composition if gram-positive bacteria. We shall also have a look at the characteristics of these bacteria.

They have a cytoplasmic lipid membrane and a thick peptidoglycan layer.

These bacteria do not have an outer membrane.

They have a lower lipid content and higher levels of teichoic acids.

They move around by using locomotion organs like cilia and flagella.

Teichoic acid is found in the walls of Staphylococcus aureus and Streptococcus faecalis.

These bacteria cell wall is made up of the following components:

It is a permeable, cross-linked organic polymer with a rigid structure that contributes significantly to the shape and strength of the cell wall. It constitutes approximately 90% of the cell wall that encloses the plasma membrane and protects the cell from the environment. Peptidoglycan is made up of three major components: a glycan backbone, a peptide, and a tetrapeptide.

The lipid element found in the cell wall of these bacteria aids in its attachment to the membrane. The total lipid content of a this bacterium cell wall ranges between 2 and 5%.

It is a glycerol polymer that is water soluble. Teichoic acid is the major surface antigen of gram-positive bacteria, accounting for approximately 50% of the total dry weight of the cell wall.

The Benefits of Gram-Positive Bacteria

These non-pathogenic bacteria live in our bodies, including the mouth, skin, intestine, and upper respiratory tract.

They are a necessary component in the production of Emmentaler or Swiss cheese.

Corynebacterium species are used in the industrial production of enzymes, amino acids, nucleotides, and other compounds.

Several Bacillus species are involved in the secretion of large amounts of enzymes.

A few of these bacteria are also involved in cheese maturation, bioconversion of steroids, hydrocarbon degradation, and other processes.

The gram-positive bacteria, Bacillus amyloliquefaciens are a good source of Barnase, a natural antibiotic protein.

Staphylococcal species are responsible for a significant increase in skin and mucous infections in all humans. These organisms are primarily transmitted through skin contact, fomite contact, inhaling infected aerosolized particles, and through pets, among other means.

Staphylococcus aureus is a gram-positive, catalase-positive, coagulase-positive cocci that grows in clusters. Skin infections, pneumonia, endocarditis, septic arthritis, osteomyelitis, and abscesses can all be caused by S. aureus.

Where can you find gram-positive bacteria?

These bacteria spores can be found in soil, air, and the human body.

What are the most common types of gram-positive bacteria?

The most common Gram-positive bacterial species among all BSI isolates was Staphylococcus (65.5%), followed by Enterococcus spp. (17.5%), Streptococcus spp. (7.1%), and other bacterial pathogens (9.9%).

What method is used to stain gram-positive bacteria?

Why are Gram-positive bacteria purple?

Gram staining differentiates between the Gram positive and Gram negative groups by coloring cells pink or violet. Gram-positive bacteria stain violet because their cell walls contain a thick layer of peptidoglycan, which retains the crystal violet with which they are stained.

What are the different types of gram-positive bacteria?

Staphylococci, streptococci, pneumococci, Bacillus anthracis, and Corynebacterium diphtheriae are examples of these type of bacteria.