LNG terminals: Cartoon of LNG liquefaction and regasification terminals. At the liquefaction terminal (left) natural gas is received by pipeline from a well field, liquefied, stored and loaded onto LNG carrier ships. At the regasification terminal (right) LNG is offloaded into storage tanks, regasified and placed into storage. It is then compressed and sent into a pipeline distribution system that delivers natural gas to end-use consumers. 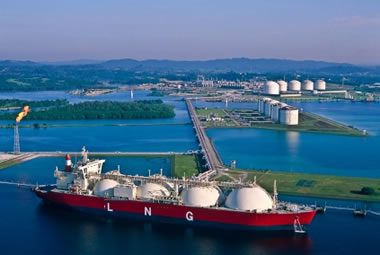 To maintain this low temperature during storage and transport, LNG must be placed into cryogenic
tanks – heavily insulated tanks equipped with refrigeration units.

When a shipment of LNG reaches its destination or when LNG is being removed from storage, it must be
regasified. This is done by heating the LNG and allowing it to evaporate back into natural gas.
Regasification is usually done at a facility where the gas can be placed into storage or directly into a pipeline for transport.

Liquefaction terminals generally receive natural gas by pipeline from a well field.
Before it is liquefied, the gas must be cleaned of water, carbon dioxide, hydrogen sulfide and
other impurities that might freeze, become corrosive, or interfere with the liquefaction process.
Once liquefied, the LNG is sent by pipeline to a LNG carrier ship or into storage to await transport.

LNG terminal map: Existing LNG terminals in the United States as of June, 2010. Kenai, Alaska was the only liquefaction terminal built for export use. The rest are regasification terminals built for import use. In April, 2012 the Federal government approved a plan to convert the Sabine, Louisiana terminal to a liquefaction facility for exporting United States natural gas to Asian markets. Image after the Federal Energy Regulatory Commission.

Where is LNG Produced?

Today, LNG is exported from locations such as: Algeria, Egypt, Nigeria, Angola, Oman, Qatar, Yemen,
Russia, Trinidad and Tobago, Australia, Malaysia, and Indonesia where natural gas production far exceeds
the consumption abilities of local markets. In these locations the price of natural gas is low because there is an
abundant supply with little local demand. That low price offsets the expenses of building an LNG liquefaction
plant, converting natural gas into LNG and transporting it to a distant market.

Where is LNG Received?

Japan, South Korea and Taiwan were the first major buyers of LNG. These areas have very high populations and
very little access to domestic fossil fuel resources. LNG gave them access to a clean-burning fuel that was
easy to distribute once pipelines were in place. Many other countries now have regasification terminals.
These include: Belgium, Brazil, Canada, Chile, China, France, India, Italy, Greece, Mexico, Spain, UK, and the United States.

How is LNG Stored?

LNG is stored in heavily insulated storage tanks that are specially designed to hold a cold-temperature
liquid. Most tanks are double-wall with an outer wall of thick concrete and an inner wall of high-quality steel.
Between the walls is a thick layer of highly efficient insulation. Many facilities have underground storage tanks for increased insulation.

No matter how well the tanks are insulated, some LNG will boil off and evaporate as natural gas.
This gas is generally removed from the tank. It is either used on-site as a fuel or refrigerated
back to the liquid state and returned to the tank.

How is LNG Transported?

Natural gas has a much lower environmental impact when it is burned than other fossil fuels. It emits less
carbon dioxide, less particulate matter and produces less ash. Although LNG is burned in the form of natural
gas, it has a greater environmental impact than natural gas that has not been liquefied. This is because LNG requires an expenditure of
energy to liquefy, transport and regasify.

Public support for LNG projects is generally mixed – especially on the import side where large numbers of people may be located near the regasification facility. Although some people hope that LNG will bring them a reliable source of economical natural gas, others have concerns that the regasification plant or the transport vehicles might explode or catch fire. Some people are also concerned that LNG facilities are terrorist targets. Although LNG has an excellent history of safety, these concerns cannot be assigned a probability of zero.

The Geography of Natural Gas