You Are Here: Home » Complete Description of the Life History of the Honey Bee 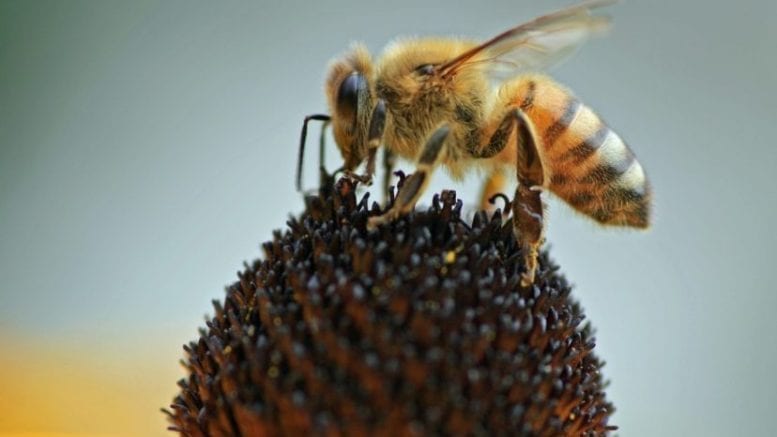 Due to its great importance as a pollinator of flowers and as a producer of honey, the honey bee, Apis mellifica, is described as a representative of the large and varied order Hymenoptera. The remarkable organization of the community is not nowadays described in terms of “instinct” or “intelligence”. There is undoubtedly a large measure of inheritance of fixed behavior patterns but these always have some degree of plasticity and are not absolutely rigid.

The queen is the Supreme Being in the hive and all the manifold activities revolve around her. A new community if forced when a queen and thousands of attendant workers fly out and form a swarm. If not placed in a proper hive, they will proceed to colonize a hollow tree or some such place. The first task of the workers is to seal up all holes, except an entrance, with “propolis” a substance prepared by the workers from gummy exudations of twigs and buds. The nest activity is the secretion of wax, which is exuded as four pairs of plates between tibia and tarsus of the hind – limb, and then it is moulded into a thread which is suspended from the roof of the hive. Soon a large mass of wax is collected together, then older workers set to work to make the cells, starting at the top and working downwards to form vertical plates with hexagonal cells.

Within a few days, the queen takes her nuptical flight. She soars high into the air, pursued by many males. Eventually one succeeds in the act of fertilization, and dies. The queen returns, carrying enough sperm in her spermotheca to last for several year. Then she proceeds to deposit eggs, one to each cell. They are small, bluish – white spindle – shaped structure fastened to the inner end of the cell by a sticky secretion. Fertilized eggs of the honey bee give rise to queens or workers, the latter being sterile females. The unfertilized eggs give rise to the males. The rate of egg – laying may exceed 3,000 a day. It is not until many cells have fertilized eggs that any unfertilized eggs are laid. Special cells are enlarged to contain the larvae destined to become queens: they are fed on a special mixture regurgitated by the workers: it is known as “royal jelly”.

The normal larvae of the honey bee hatch in three or four days. They are fed by the workers on pollen and honey, mixed to form a pate. After several moults, they pupate in an imperfect silken cocoon, having become fully – grown larvae in five days. Metamorphosis takes eight to ten days, and then the imago emerges.

The three types of imagos of the honey bee are different in external features. The workers are small with well – developed wings and freely movable antennae. there are very interesting modifications of the legs. The first leg has a very open joint between tibia and tarsus: the proximal end of the tarsus is almost semicircular and it bears a comb of short stiff setae. This comb is used for cleaning the antennae, proboscis and head, of pollen. On the tibia of the second leg is a stout seta called the prong: it is used for digging the pollen out of the pollen basket on the third leg. The third leg has the tibia deeply grooved with stout bristles on each side of the groove which serve to retain the pollen: it is known as the pollen basket. The tarsus has rows of setae forming the brush: it is used for sweeping the pollen from the body into the basket of the other side. The ovipositor of the worker is modified to form a barbed sting: it can be used once only, since the barbs cannot be withdrawn from the wound, and as the bee frees herself, the poison sac and often other abdominal organs are torn out of her body and she soon dies. The mouth parts are adapted for sucking nectar and for moulding wax. These busy workers graduate from one job to another. They start as clearance of the wax cells and attendants for the young larvae. After a few days of this task, they keep the hive clean, assist in storing food in the storage cells, and by their wing movements assist ventilation. When they are about three weeks old, they begin to fly outside and are soon occupied as collectors of pollen and nectar. Such a strenuous life does not last long, and in the honey season, they die after four or five weeks. The survivors hibernate by clustering in a dense mass around the queen, feeding themselves on stored honey.

READ MORE:  Jacob-Monod Hypothesis and the Genetics of Enzyme Synthesis in E.coli

The queen senses the maturing of the young princesses in their large cells, and if not prevented by her attendant workers, she would sting them to death. Soon she leaves the hive with a large number of the workers to from a swarm and begin a new colony. Then, the most mature princess is allowed to emerge. There may be several swarms a year, but as the cold season approaches, the workers allow the queen to kill off any others still awaiting release from the royal cells. The queen is larger and longer – bodied and the wings are relatively smaller: she flies only two or three times. The sting is not barbed and so can be used repeatedly. The mouth parts are rudimentary: she is fed by the workers all her life. In the honey bee, a queen may live for five or six years. The type of food decides whether a larva will become a queen or a worker.