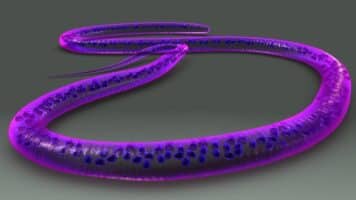 Onchocerca volvulus is a filarial (arthropod-borne) nematode (roundworm) that causes onchocerciasis (river blindness) and is the world’s second-leading cause of infection-related blindness after trachoma. It is one of the 20 tropical diseases neglected by the World Health Organization.

In 1874, Irish surgeon John O’Neill discovered Onchocerca volvulus as the causative agent of craw-craw, a skin disease found in West Africa. Rodolfo Robles, a Guatemalan doctor, was the first to link it to visual impairment in 1917.

Humans are the only known definitive host of Onchocerca volvulus, which is primarily found in Sub-Saharan Africa. It is transmitted from person to person by female Simulium biting blackflies.

The parasite Onchocerca volvulus obtains nutrients from the human host by ingesting blood or diffusing through their cuticle. Because dense vascular networks frequently surround the worms, they may be able to stimulate blood vessel formation. The presence of deep transverse striations distinguishes them from other human-infecting filarial nematodes.

It is a dioecious species with distinct males and females that form nodules under human skin. Mature female worms live in these fibrous nodules indefinitely, whereas male worms are free to move around the subcutaneous tissue. Males are shorter than females, measuring 23 mm in length compared to 230-700 mm in females.

The presence of a male worm does not affect the release of oocytes (eggs) in female worms, though they may attract male worms using unidentified pheromones. The first larval stage, microfilariae, is 300 m long and unsheathed, which means that when they mature into microfilariae, they exit the egg envelope. 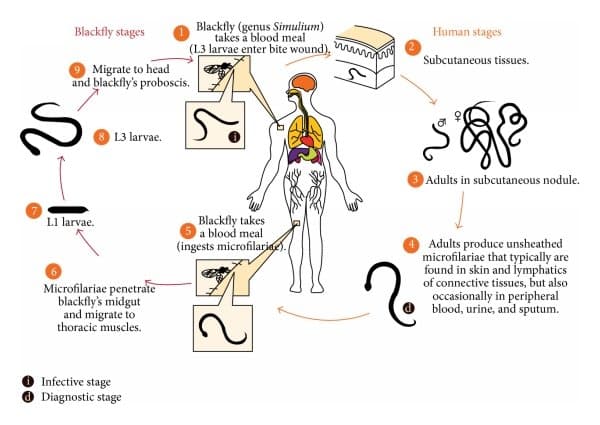 READ MORE:  7 Hot Facts About the Pacific Ring of Fire

Adult worms have a 15-year lifespan on average, and mature females can produce 500 to 1,500 microfilariae per day. The average microfilarial lifespan is 1.0 to 1.5 years; however, their presence in the bloodstream causes little to no immune response until the microfilariae or adult worms die or degrade.

Onchocerciasis is caused by Onchocerca volvulus, which causes severe itching. Long-term infection can lead to keratitis, an inflammation of the cornea in the eye, and eventually blindness.

READ MORE:  Importance Of Microbiology To Our Society

Symptoms may not appear for up to a year after infection. Here are the following ailments that take place when the infection occurs.

The most effective treatment is to use ivermectin, but resistance to this drug has been reported. For several months, ivermectin prevents female worms from releasing microfilariae, relieving symptoms and temporarily preventing transmission. However, because this does not kill adult worms, it must be repeated once a year as long as adult worms are present.