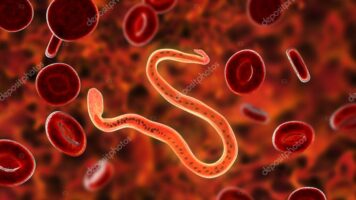 A variety of mosquito vector species spread these filarial worms. W. bancrofti, the most common of the three, it affects over 120 million people, primarily in Central Africa and the Nile Delta, South and Central America, tropical Asia, including southern China, and the Pacific islands.

If left untreated, the infection can progress to lymphatic filariasis, a chronic disease. It can also cause tropical eosinophilia, an asthmatic disease, in rare cases.

There is no commercially available vaccine, but high rates of cure have been achieved with various antifilarial regimens, and the WHO Global Program to Eliminate Lymphatic Filariasis aims to eradicate the disease.

W. bancrofti infection is dependent on the host’s immune system and inflammatory responses. Within 6-8 months of infection, the worms mature, male and female worms mate, and the microfilariae are released. These microfilariae can live in the environment for up to ten years.

The asymptomatic phase is characterized by high microfilariae infection with no symptoms of infection. This is due to the cytokine IL-4 suppressing TH1 cell activity in the immune system.

This can go on for years until the inflammatory response returns.

Lymphedema is caused by worms in the lymph channels disrupting the flow of lymph.

Fever, chills, skin infections, painful lymph nodes, and tender skin of the lymphedematous extremity are all symptoms. These symptoms usually subside after 5-7 days. Other symptoms that may occur include orchitis, a testicular inflammation accompanied by painful, immediate enlargement, and epididymitis (inflammation of the spermatic cord).

Lymph varices, lymph scrotum, hydrocele, chyluria (lymph in urine), and elephantiasis are symptoms of the obstructive (chronic) phase. Microfilariae are normally absent during this phase. Scar formation from affected tissue areas is a key feature of this phase. Other symptoms include skin thickening and elephantiasis, which develops gradually as the lymphatic system is attacked. Elephantiasis primarily affects men in the legs, arms, and scrotum. Women are affected in the legs, arms, and breasts.

Wuchereria bancrofti is a dioecious worm. It demonstrates sexual dimorphism. The adult worm is long, cylindrical, slender, and smooth with rounded ends. It is almost transparent and white in color. Because the body is so delicate, removing it from tissues is difficult. It has a short cephalic or head region connected to the main body by a constricted short neck. The dark spots are nuclei that are dispersed throughout the body cavity, with no nuclei at the tail tip. The size and structure of the tail tips distinguishes males and females. The male worm is smaller, measuring 40 mm (1.6 in) in length and 100 m (0.0039 in) in width, and has a ventrally curved tail.

The sensory organs are 15 pairs of minute caudal papillae at the tip of the tail. The anal region is a complex structure made up of 12 pairs of papillae, eight in front and four behind the anus. The female, on the other hand, is 60 millimetres (2.4 in) to 100 millimetres (3.9 in) long and 300 micrometres (0.012 in) wide, nearly three times the size of the male. Its tail tapers gradually and is rounded at the tip. There are no additional sensory structures visible. Its vulva is located in the anterior region, approximately 0.25 mm from the head. Males and females are frequently coiled together and difficult to separate. Females are ovoviviparous and can give birth to thousands of microfilariae.

The microfilaria is a miniature adult that retains the egg membrane as a sheath and is frequently mistaken for a mature embryo. It is 280 meters long and 25 meters wide. In vivo, it appears structureless, but histological staining reveals its primitive gut, nerve ring, and muscles. 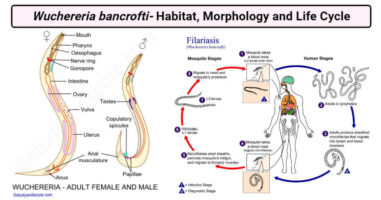 Wuchereria bancrofti reproduces in two hosts. Humans are the ultimate hosts, and mosquitos are the intermediate hosts.

Adult parasites live in the human host’s lymphatic system. They are mostly found in the lymph glands’ afferent lymphatic channels in the lower part of the body. The first-stage larvae, known as microfilariae, are found in the environment. The microfilariae have a “sheath” of membrane. This sheath, along with the area in which the worms live, aids in determining the species of microfilariae in humans.

The microfilariae are mostly found in the peripheral blood and are most abundant between 10 p.m. and 4 a.m. They migrate between the deep and the peripheral, with a distinct diurnal rhythm.

They are present in the deep veins during the day and migrate to the peripheral circulation at night. The cause of this periodicity is unknown, but the fact that the microfilariae are in the peripheral blood during these hours may mean that the vector, the nighttime mosquito, has a better chance of transmitting them elsewhere.

Sleeping is also associated with physiological changes such as decreased body temperature, oxygen tension, and adrenal activity, as well as an increase in carbon dioxide tension, among other physical alterations, any of which could be signals for the rhythmic behavior of microfilarial parasites. The hosts’ periodicity is reversed if they sleep during the day and are awake at night. W. bancrofti is known as periodic in the South Pacific, where it exhibits diurnal periodicity.

Microfilariae are transferred into a vector, which is typically a mosquito species from the genera Culex, Anopheles, Mansonia, and Aedes. The microfilariae mature inside the mosquito into motile larvae called juveniles, which migrate to the labium after about 10 days.

Wuchereria bancrofti larvae are deposited from the mouthparts onto the skin of the prospective host and migrate through micro cuts in the dermis or the tract created by the proboscis into the bloodstream of the new human host when the infected mosquito has its next blood meal. The larvae travel through the lymphatic system to regional lymph nodes, which are mostly found in the legs and genital area. Over the course of a year, the larvae mature into adult worms and reach sexual maturity in the afferent lymphatic vessels. The adult female worm can produce thousands of microfilariae that migrate into the bloodstream after mating.

A mosquito vector can bite an infected human host, consume microfilariae, and thus complete the lifecycle. The organism does not reproduce within its intermediate host, the mosquito.

In endemic areas, prevention focuses on mosquito bite protection. To avoid mosquito bites, use insect repellents and mosquito nets. To successfully reduce the prevalence of W. bancrofti infections, public education efforts must be made in endemic areas around the world.

The parasite’s severe symptoms can be avoided by cleansing the skin, surgery, or the use of anthelmintic drugs like diethylcarbamazine, ivermectin, or albendazole. Diethylcarbamazine, at a dose of 6 mg/kg/day for 12 days, semiannually or annually, can eliminate microfilariae from the blood as well as kill adult worms. Polytherapy with ivermectin and either diethylcarbamazine or albendazole is more effective than either drug alone. Protection is similar to that of other mosquito-borne illnesses; to control the spread of the disease, one can use physical (a mosquito net), chemical (insect repellent), or mass chemotherapy barriers.

The entire endemic area should be treated with mass chemotherapy at the same time. This will significantly reduce the overall microfilarial titer in blood in mass, thereby reducing transmission through mosquito bites.

Antibiotics active against the worm’s Wolbachia symbionts have been tested as a treatment. Wolbachia-free worms become sterile immediately and die prematurely.