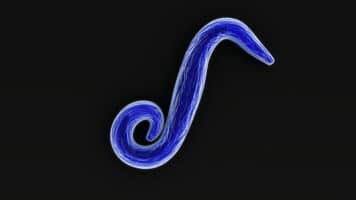 Plasmodium falciparum is a protozoan parasite that causes malaria, an infectious disease. It is the most dangerous strain of the malaria species, and it is linked to nearly every malarial death. Plasmodium vivax, Plasmodium ovale, and Plasmodium malariae are the other three species that cause malaria.

A female Anopheles mosquito infects humans by transferring a parasitic vector into the bloodstream via its saliva. The parasite then infects the liver and reproduces asexually before insertion into red blood cells, where another round of replication occurs.

Plasmodium falciparum alters the surface of an infected red blood cell, causing it to adhere to blood vessels and other red blood cells (cytoadherence). In severe cases, this causes microcirculation obstructions, resulting in organ dysfunction. Symptoms vary depending on the severity of the infection and can include flu-like symptoms, vomiting, diarrhea, shock, kidney failure, coma, and death. Plasmodium falciparum primarily infects children under the age of five and pregnant women.

Plasmodium falciparum is transmitted between humans and Anopheles mosquitoes. Malaria is transmitted from host to host by mosquito vectors. The parasite can infect mosquitoes by ingesting human blood, or a human can be infected by the mosquito’s saliva injection. Once infected with Plasmodium falciparum, the mosquito transmits the disease to each new host it infects. Humans rarely pass the parasite on to one another. There have been rare cases of contaminated transfused blood infecting the recipient, but this is rarely the result of pre-blood donation screening. Mothers can also pass Plasmodium falciparum to their child during birth, though this is uncommon.

The ability of the Anopheles mosquito to live in a specific area is the key to Malaria-endemic. The temperature must also be kept above 20 degrees Celsius. Plasmodium falciparum is primarily found in South America, Africa, India, and a few parts of Indonesia. A warmer region along the equator is the best location for transmission. Transmission will not take place at high altitudes, during colder seasons, or in deserts. Malaria is thought to have existed since the dawn of time, but it was discovered in blood in 1880 and transmitted by mosquitoes in 1889. Malaria has four common species, the most severe of which is P. falciparum. Plasmodium falciparum is expected to increase in drug-resistant populations and insecticide-resistant mosquitoes leading to the prediction that the disease will only worsen over time.

READ MORE:  Working Principles and Uses Of a Nebulizer

The Life Cycle of Plasmodium falciparum

Malaria has a complicated life cycle in which it infects two hosts, humans and mosquitos. The process starts when an infected mosquito transfers saliva and sporozoites into a person’s circulatory system. These sporozoites enter the liver and infiltrate hepatocytes.

Asexual reproduction occurs in the liver via exoerythrocytic schizogony, which produces merozoites that are released back into the bloodstream. Merozoites then invade erythrocytes and begin the trophic period. During this time, the trophozite expands, which is followed by multiple rounds of asexual nuclear division to form a schizont. Merozoites develop from schizonts and eventually rupture the erythrocyte, releasing toxins that cause the classic symptoms of malaria, fever and chills.

Merozoites eventually infiltrate another erythrocyte, triggering a new round of blood stage replication. Some erythrocytes transform into gametocytes, which can reproduce sexually. These cells do not lyse, but are instead taken up by the next mosquito that bites, infecting the mosquito and potentially infecting more people.

READ MORE:  Important Notes on Autism and How to Manage It

Plasmodium falciparum-infected erythrocytes do not rupture in severe cases, instead sequestering into the tissue with their virulent nobs. As a result, symptoms can become far more complicated, potentially fatal.

Malaria symptoms typically appear 8-25 days after infection, but in some cases it can take up to a year. The late onset of incubation is caused by taking insufficient anti-malaria medication. The infectious dose is not precisely known, but it is thought to be very low. Malaria can be detected months to years after the first symptoms appear. This is due to the parasite’s ability to remain dormant in liver cells until the conditions are favorable for relapse. This is more common in Plasmodium vivax and Plasmodium ovale than Plasmodium falciparum. The parasite colonizes the liver before being released into the bloodstream and infiltrating erythrocytes.

Plasmodium falciparum infection typically takes one of two forms: simple or severe. Most severe cases exhibit symptoms such as cerebral malaria, which causes abnormal behavior, seizures, coma, or impairment of consciousness. Severe symptoms include anemia from red blood cell destruction, hemoglobinuria, acute respiratory distress, low blood pressure, acute kidney failure, metabolic acidosis, and hypoglycemia. All of these are the result of organ failure and abnormalities in the patient’s blood or metabolism.

Pregnant women are more likely to have a severe reaction due to the malaria Infection and the fetuses too can also affected. Malaria can cause prematurity, abortion, and stillbirth in some cases.

Due to the immaturity of their immune systems, young children are also at a higher risk for more severe infections.

Preventative antimalarial treatment, taken properly before, during, and after parasite exposure, is the best line of defense against any form of malaria.

Plasmodium falciparum treatment is determined by the severity of the infection as well as the location of the infection. Treatment may also differ depending on a person’s age, weight, and pregnancy status.

The first line of defense in uncomplicated malaria is Artemisinin-based combination therapy (ACT). ACTs are used to improve treatment by overcoming resistance by combining more than one Artemisinin derivative. The ACT to be used is determined by the region where the infection occurred. This is due to the different levels of resistance found in various areas. Non-ACTs, such as sulfadoxine-pyrimethamine with chloroquine, can also be used, but their efficacy is limited due to drug resistance.

The main goal in severe malaria is to keep the patient alive. Rapid clinical evaluation and confirmation are critical.

Each has its own set of complications and, if properly treated, it has the ability to break the malaria cycle. It is now thought that the best way to control malaria is to target humans first, then mosquitos, and finally the parasite. The interconnected web enables malaria control on one of these systems to supplement the others.