You Are Here: Home » Interference Phenomenon In Thin Wedge Films 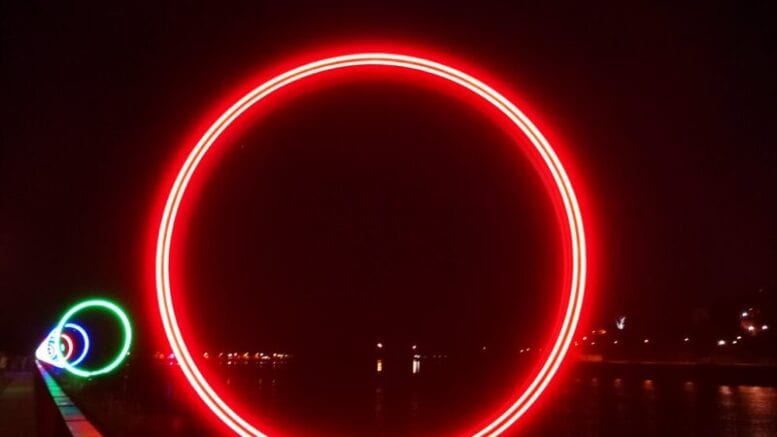 A very thin wedge of an air film can be formed by placing a thin piece of foil or paper between two microscope slides at one end Y, with the slides in contact at the other end X, (Fig. below). The thin wedge films have then a very small angle θ, as shown. When the air-film is illuminated by monochromatic light from an extended source S, straight bright and dark bands are observed which are parallel to the line of intersection X of the two sides.

The light reflected down towards the wedge is partially reflected upwards from the lower surface O of the top slide. The remainder of the light passes through the slide and some is reflected upward from the top surface B of the lower slide. The two trains of waves are coherent, since both have originated from the same centre of disturbance at O, and they produce an interference phenomenon if brought together by the eye or in an eyepiece. Their path difference is 2t, where t is the small thickness of the air-film at O. At X, where the path difference is apparently zero, we would expect a bright band. But a dark band is observed at X. this is due to a phase change of 180o, equivalent to an extra path difference of λ/2, which occurs when a wave is reflected at a denser medium.  The optical path difference between the two coherent beams is thus actually 2t + λ/2, and hence, if the beams are brought together to interfere, a bright bands is obtained when 2t + λ/2 = mλ, or 2t = (m – 1/2 )λ. A dark band is obtained at a thickness t given by 2t = mλ.

The bands are located at the air-wedge film, and the eye or microscope must be focused here to see them. The appearance of a band is the contour of all points in the air-wedge film where the optical path difference is the same. If the thin wedge films surfaces make perfect optical contact at one edge, the bands are straight lines parallel to the line of intersection of the surfaces. If the glass surfaces are uneven, and the contact at one edge is not regular, the bands are not perfectly straight. A particular band still shows the locus of all points in the air-wedge which have the same optical path difference in the air-film.

Thickness Of Thin Foil And the Expansion Of Crystal

If there is a bright band at Y at the edge of the foil, (Fig. above), the thickness b of the foil is given by 2b = (m + ½)λ, where m is the number of bright bands between X and Y. If there is a dark band at Y, then 2b=mλ. Thus by counting m, the thickness b can be found. The small angle θ of the wedge is given by b/a, where a is the distance XY, and by measuring a with a travelling microscope focused on the air-film, θ can be found. If a liquid wedge is formed between the plates, the optical path difference becomes 2nt, where the air thickness is t, n being the refractive index of the liquid. An optical path difference of λ now occurs for a change in t which is n times less than in the case of the air-wedge. The spacing of the bright and dark bands is thus n times closer than for air, and measurement of the relative spacing enables n to be found.

In studying thin wedge films, We observe that the coefficient of expansion of a crystal can be found by forming an air-wedge of small angle between a fixed horizontal glass plate and the upper surface of the crystal is heated a number of bright bands, m say, cross the field of view in a microscope focused on the air-wedge. The increase in length of the crystal in an upward direction is mλ/2, since a change of λ represents a change in the thickness of the film is λ/2, and the coefficient of expansion can then be calculated.

The Working Principles of the OLED Television