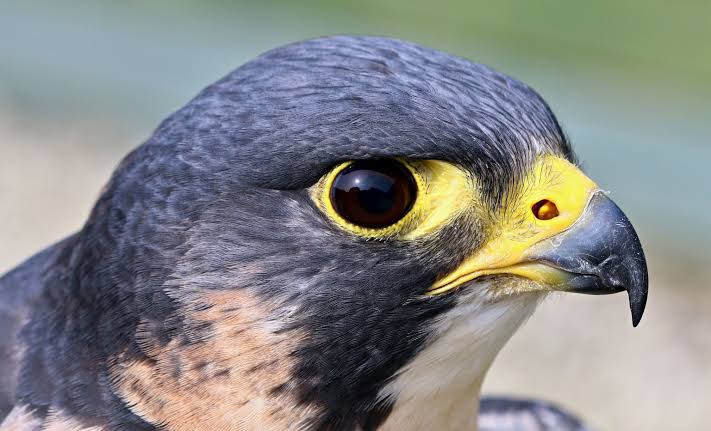 The peregrine falcon is reported to be the world’s fastest creature with it’s speed stated to be over 200 mph, especially when they are about to attack their prey. These birds are also amongst the list of endangered species in the world and are at the edge of extinction. We will be looking into some interesting and fun facts about this creature which you might not have heard. 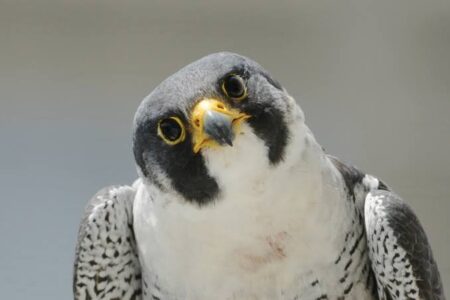 How does one know how this creature looks like?, well we already know that this creature are super fast, but they are also amongst the largest birds and are very strong. The peregrine falcons posses long wings and short tails. they also posses a black moustache, and their pale breast is considered to be spotted. Their head crown is dark and their wings are barred with dark stripes.

2) Where can one find the Peregrine Falcon ?

You can find peregrine falcons in open countries which are rich in agriculture. Whenever their season to breed approaches, these creatures can be seen making their nests on Rocky surfaces such as sea cliffs. Most of their nests could also be seen in places like: the bridge, the church cathedrals, or any other place in the urban areas.

They feast on starlings as well as the feral pigeons which they consider to be a quite a delicacy.

3) They Migrate Based on Seasons 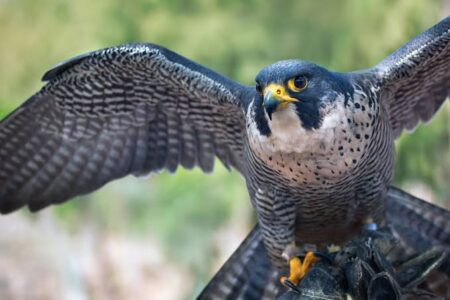 According to reports, peregrine falcons fly up to 15,000 miles annually.

The word Peregrine means a wanderer. see the Galapagos finches

4) What Does a Peregrine Falcon Eat ?

Their hunting style includes, swooping down from a great height to stoop on their preys, before grabbing them with their claws and feasting on them. If their prey is too heavy for them to carry back to their nest, they will drop the prey from the sky, crushing the prey to the ground and then swoop down to feast on the dead prey.

Their favorite hunting time is at dawn and in most case, they hunt mostly at dusk.

5) They Posses Many Adaptation for Hunting 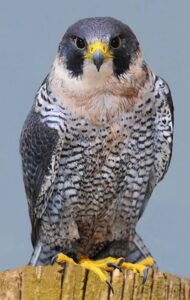 There are different body parts which gives the peregrine falcons an advantage over their prey, for example, their binocular vision is 8 times better than the human binocular vision, their nostrils prevents their lungs from getting damaged by guiding the air’s shock waves.

An interesting fact about their eye is that it can see more than 5 km away.

The little falcons always depends on their parent for food and protection before fledging around 39 days or more, after which they become independent and start hunting for their own foods in order to survive.

7) What Threatens the Peregrine Falcons ?

The threats surrounding the peregrine falcons started back in the twentieth century, where game keepers as well as land owners will kill the falcons, in order to protect their pigeons.

Although the law was in effect, the peregrine falcons kept dying in large numbers, a test was conducted to discover what might have been the cause of their death. After series of tests, scientists revealed that the peregrine falcons are dying because they consumed a poisonous substance found in pesticides. The scientists further explained that, the preys eat their food along with the pesticides and whenever they are killed by predators or eaten by the falcons, that harmful substance that was consumed by the prey gets passed to the falcons and ends up killing the falcons.

This poisonous substance was called DDT.

Based on the report, DDT got banned in Hungary in the year 1968 , and with time many countries also banned DDT. The United State Of America banned DDT in the year 1972, but it took the United Kingdom few more years before they decided to ban it in the year 1984. Thanks largely to the ban of such harmful substances the peregrine falcons are now escaping extinction. According to reports there are about 14,900-28,800 pairs of peregrine falcons residing in Europe.

This means 13% of the world’s global population is filled by the peregrine falcons.

How can we protect these amazing creatures? There are lot of ways we can help save this creature from extinction, and they include:

* Reporting anyone hunting and killing the falcons.

* Donating to charities who are ensuring they protect the peregrine falcons and so much more.

Tell us one or two things you know about the peregrine falcon in the comment section.