What is Motion? What are the differences between speed and velocity? What is friction and how can it be reduced? These are questions relating to fluids and mechanics and form part of the very basics in physic and engineering.

1) Random Motion:
This is a type of motion in which a body moves irregularly with no preferred direction.

2) Translational Motion:
The translational motion is a type of motion in which every point in a moving body remain fixed in relation to other points.

3) Rotational Motion:
This is a type of motion where every point in a body moves in circles.

4) Oscillatory or Vibratory Motion:
This is a type of motion in which a body moves to and fro, reversing it’s direction, and returning regularly to it’s position.

Dynamics is about the motion of objects and the forces acting on them. It deals with the forces that keeps an airplane in flight through air. The founder of mechanics is Sir Isaac Newton.

The term ‘ Speed ‘ describes the rate at which a body covers a distance.
Speed is the distance travelled in unit time.

If you run round the corner of a street to see a friend and Travel a distance of 24m in 20s, then your average speed is:

Similarly if a car takes 2h to travel along a winding road from a town to another town 96km away, the average speed of the car is: 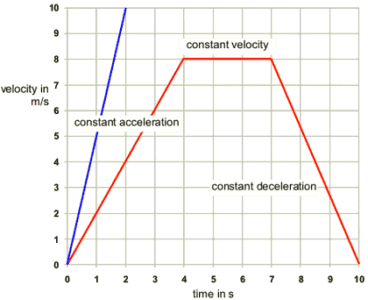 Velocity is defined as the rate of change of displacement.

When a body moves with equal displacements in equal time intervals, it is said to be in uniform velocity.

A car travels at an average speed of 100kmh^-1, What distance does it cover in 5min.
Solution:

Distance time graph provides useful information about the motion of an object.
If the graph is a straight line , the speed ( or velocity ) is uniform since the body covers equal distances in equal times.

Acceleration:
Acceleration is the rate of change of velocity with time. It’s unit is metre – per – second square. (ms ^-2 )

Example:
A car traveling at 36km/h accelerates uniformly at 2m/s^2. Find its velocity in km/h in 5s time.
NB: The velocity of 36km/h is therefore changed to metre per second.

Friction is the force which acts at the separation between two objects in contact and tends to oppose the motion of one over the other.

1) Static or Limiting Friction:
This is the maximum force that must be overcome before a body can move over another.

2) Kinetic or Dynamic Friction:
This is the for e that must be overcome so that a body can move with uniform speed over another body.

1) It leads to much wear and tear on the moving parts of a machine.
2)It causes loss if energy in a machine.
3)It causes the heating of engines.

1) Application of lubricants
2)The use of ball it roller bearings
3) Streamlining of body shapes of moving objects.

What is a Centripetal Force?:

Centripetal Force is the inward force required to keep an object moving with a constant speed in a circular path.

What is a Centrifugal Force?:

A centrifugal Force acts in opposite direction to the centripetal force.