You Are Here: Home » Importance of Stoichiometry and Electronegativity in Chemical Reactions 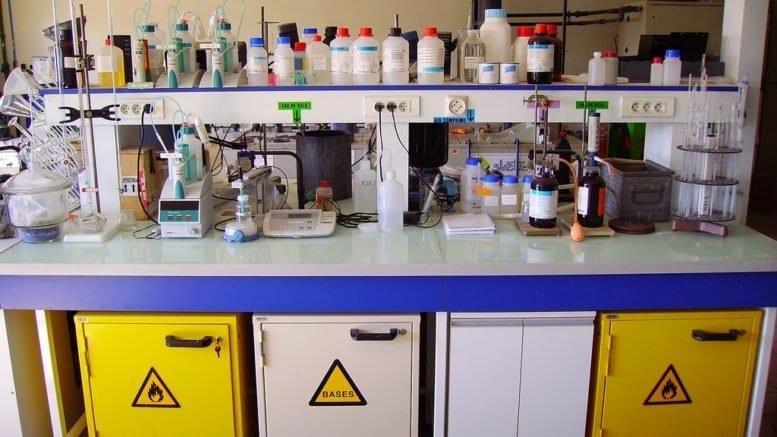 Stoichiometry is the art of measuring chemical elements in quantitative relationship in chemical reactions. It is ordinary chemical arithmetic. Experiments can be designed to study the stoichiometry of reactions. The types of reaction that are commonly studies include

Stoichiometry of a Precipitation Reaction

Stoichiometry of Hydrogen Displacement from an Acid

Magnesium readily displaces gaseous hydrogen from dilute hydrochloric acid. To study the stoichiometry of this reaction, we react a known mass of magnesium with an excess of the acid, and measure the volume of hydrogen liberated.

READ MORE:  The Electronic Structure and Uses of the Noble Gases

From the readings given, we can calculate the mole ratio of the magnesium and hydrogen in this reaction in the following way;

Let V2 be the volume of hydrogen obtained experimentally at s.t.p.

One mole of magnesium atoms liberates one mole of hydrogen molecules from dilute hydrochloric acid (i.e it displaces two moles of hydrogen atoms from the acid). the equation of the reaction can now be written.

Stoichiometry of the Displacement of Copper Ions by Zinc Metal

Zinc displaces copper (II) ions from a solution of copper(II) tetraoxosulphate(VI). To study the stoichiometry of this reaction, we find the mass of metallic copper displaced by a known mass of zinc dust.

Place a known amount of zinc dust in a test-tube Pour concentrated copper(II) tetraoxosulphate(VI) solution, a little at a time, onto the zinc dust (with intermittent shaking of the tube) until the latter is completely replaced by a reddish-brown deposit of copper. Add an excess of the copper(II) tetraoxosulphate(VI) solution to ensure that all the zinc dust has reacted. Filter the mixture in the test-tube. Dry the copper residue on the filter paper and find its mass.

Stoichiometry of the Synthesis and the Reduction of Metallic Oxides

We can carry out experiments  to study the stoichiometry of the synthesis and the reduction of a metallic oxide respectively.

The Effects of Electronegativity on Chemical Reactions

As we move from one element to the next across a period, the nuclear charge increases and the atomic radios decreases. These two factors combine to increase the electron-attracting power of the atom. This leads to an increase in the electronegativity of the element.

Variations in Chemical Properties of Elements

Groups: Elements in the same group tend to resemble one another in their chemical behaviour because they have the same number of valance electrons. The four groups of elements which show great similarity in their chemical properties are

The group 1 elements have atoms with one valence electron each. They include metallic elements like lithium, sodium and potassium. They are characterized by their great reactivity and form very stable compounds.

5 Important Properties Of A System In Chemical Equilibrium