You Are Here: Home » The Importance and Role of the Nucleus in Cell Division 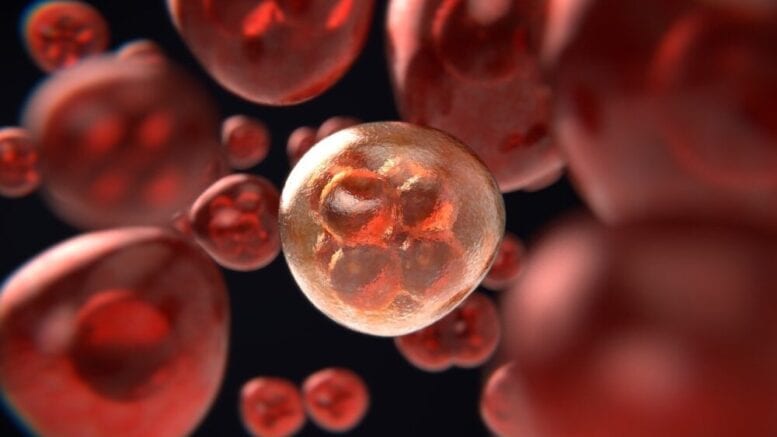 If a fertilized egg is deprived of its nucleus it fails to develop properly; in fact the enucleated egg usually dies unless the nucleus is returned within a short period of time. This in itself shows that the nucleus plays an important part in cell division and in directing the development of the fertilized egg into an embryo.

The nucleus is, of course, required for cell division, but it also determines the type of structure which the cell eventually develops into. This has been demonstrated by the German biologist J. Hammerling, using the marine alga Acetabularia. The great advantage of this organism is that although it is a single cell it is unusually large. The body consists of a ‘head’, a stalk about 40mm in length, and a base of root-like rhizoids. The nucleus is situated at the base of the stalk. In Acetabularia mediterranean the head is cup-shaped, but in another closely related species, Acetabularia crenulata, it consists of a circlet of finger-like processes.

Now let us examine Hammerling’s experiment and draw such conclusions from them as we can. In his early experiments he cut through the stalk of Acetabularia mediterranean so as to separate the head from the base. He found that the top half (without a nucleus) died, but the bottom half (with the nucleus) regenerated a new cup-shaped head. It looked as if some kind of chemical substance might be passing from the nucleus into the cytoplasm of the stalk stimulating the formation of a new head.

To test this latter hypothesis Hammerling cut across the stalk in two places, just below the head and just above the base. The isolated stalk was then returned to sea water and after a time it regenerated a new head. At first sight this might appear to contradict the notion that the nucleus is required for development of a head, but consider the next step in the experiment. After regeneration was complete the new head was removed. This time it was found that the isolated stalk failed to regenerate another head. How can we interpret this result? One interpretation is to assume that the supposed chemical substance produced by the nucleus is present in the stalk. There appears to be sufficient for the formation of one new head, but the insufficient for the formation of further heads.

Since Hammerling conducted these investigations on cell division and the role played by the nucleus, other more refined experiments have been carried out on Acetabularia. Individual nuclei have been transplanted from one species to another and the effect on regeneration noted. All these experiments point to the same general conclusion, namely that the nucleus plays a central role in initiating and guiding morphogenesis. In view of modern genetics theory this is not surprising for the nucleus contains the genetic material responsible for laying down the characteristics of the organism.