In discussing equipotentials, we must admit that the earth must have the same potential with all over, because it is a conductor. In a conductor, there can be no differences of potential, because these would set up a potential gradient or electric field; electrons would then redistribute themselves throughout the conductor, under the influence of the field, until they had destroyed the field. This is true whether the conductor has a net charge, positive or negative, or whether it is uncharged; it is true whatever the actual potential of the conductor, relative to any other body. 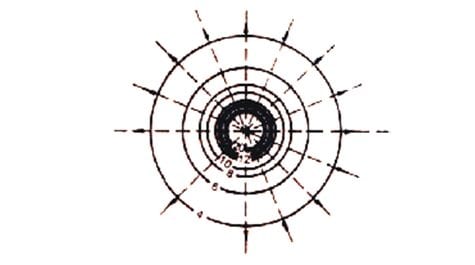 READ MORE:  How Does a Refrigerator Work?

When we set out to consider the electric field due to more charges than one, then we see the advantage of the idea of potential over the idea of field-strength. If we wish to find the field-strength E at the point P in (Fig above), due to the two charges Q1 and Q2, we have first to find the force exerted by each on a unit charge at P, and then to compound these forces by the parallelogram method. (See Fig. above). On the other hand, if we wish to find the potential due to each charge, potential at P, we merely calculate and add the potentials algebraically. 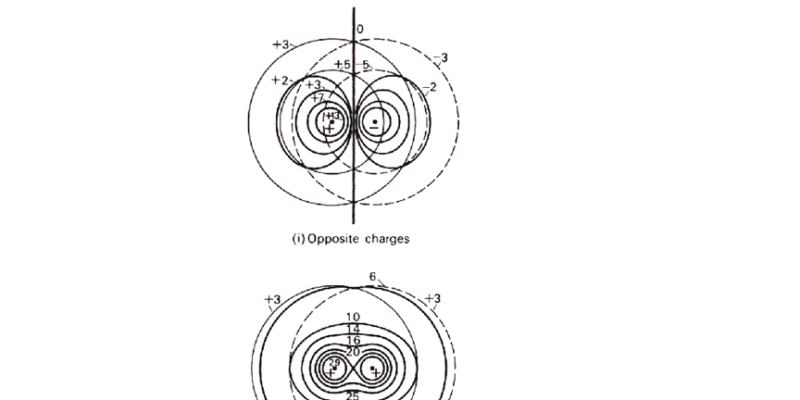 they have no direction: they do not point north, east, south, or west. Quantities which have direction, like forces are called ‘vectors’; they have to be added either by resolution into components, or by the parallelogram method. Either way is slow and clumsy, compared with the addition of scalars. For example, we can draw the equipotentials round a point-charge with compasses; if we draw two sets of them, as in Fig. above (i) or (ii), then by simple addition we can rapidly sketch the equipotentials around the two charges together.

And when we have plotted the equipotentials, they turn out to be more useful than lines of force. A line of force diagram appeals to the imagination, and helps us to see what would happen to a charge in the field. But it tells us little about the strength of the field – at the best, if it is more carefully drawn than most, we can only say that the field is strongest where the lines are closest. But equipotentials can be labeled with the values of potential they represent; and from their spacing we can find the actual value of the potential gradient, and hence the field-strength. The only difficulty in interpreting equipotential diagrams lies in visualizing the direction of the force on a charge; this is always at right angles to the curves.