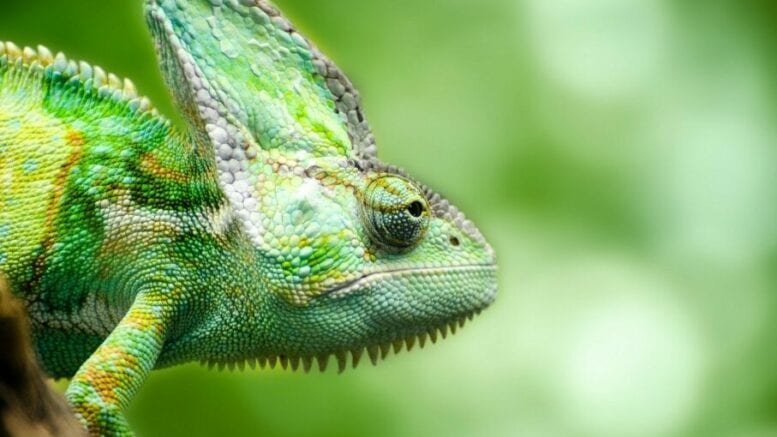 Chromatophores are specialized pigment cells found in the skin of fishes, amphibians, reptiles, octopuses and squids, etc. Many such animals can change their colour, or shade, by concentrating or expanding the pigment in their chromatophores. This is achieved either by muscle fibres pulling the flexible wall of the cell outwards, as in octopuses and squids, or by migration of pigment within the chromatophore, as in most other animals. These movements are controlled partly by nerves, partly by hormones. In vertebrate chromatophores with a nerve supply, the sympathetic system causes concentration, the parasympathetic dispersal, of the pigment.

Chromatophore is important in adaptive coloration, particularly where colour change is possible. Darkening or lightening of the body so that it merges with the background is an important aspect of camouflage and a sudden colour change may also serve as a warning signal. So far as colour change is concerned, the doyen of animals is the chameleon whose chromatophores contain a wide range of pigments including green, yellow, red and black. By varying the relative concentration of these different pigments, it can adopt a wide variety of colours depending on the background. These subtle responses are initiated through reflexes involving the eyes.

Found in certain fishes, notably the South American electric eel and the Mediterranean electric ray, these organs consist of stacks of sheet – like electroplates, modified muscle fibres innervated by the autonomic nervous system. Instead of contracting they send out electric pulses. The total discharge of all the plates simultaneously can exceed 700 volts, which is more than enough to electrocute quite sizeable prey.

It is now known that many fishes produce much lower voltages, emitting a pattern of electric pulses which are not used for killing prey but for locating objects in their immediate vicinity. The fish is sensitive to disturbance of the electric field surrounding it, a kind of radar system in fact.

Luminescence is common in marine organisms, particularly deep sea fishes. Such animals have light – producing cells which are under nervous control. Luminescence is brought about by oxidation of an organic compound, luciferin, catalysed by the enzyme luciferase. For this reaction, ATP is required.

Light – producing organs are sometimes quite elaborate. that of the shrimp has a reflecting layer behind the light – producing cells and a special lens for concentrating the light. The function of luminescence is not always clear, though in many species it probably brings the sexes together for spawning.