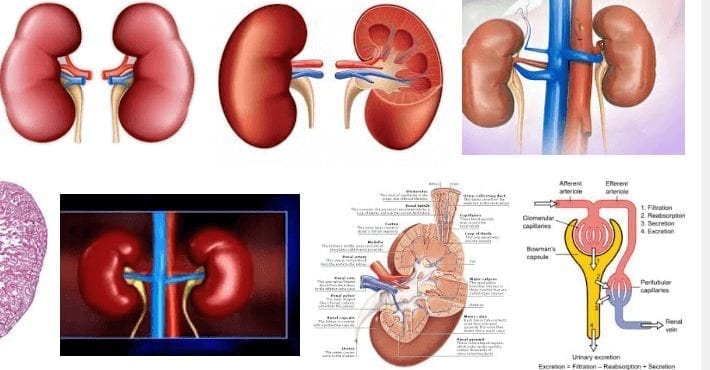 What happens to it has also been investigated by A.N. Richards. Using amphibian kidneys, he extracted small quantities of fluid, the so-called renal fluid, from the proximal and distal tubules and then analyzed them chemically. This is an exceeding difficult task, bearing in mind that the tubules are mere 20 µm wide, and his success lay in the use of extremely fine micro-pipettes mounted in micro-manipulators. Many of his findings were confirmed by isolation a short section of the tubule and perfusing it with a fluid of known composition. the fluid was introduced at one end of the isolated stretch and withdrawn from the other. It was then analyzed. As with the analysis of glomerular filtrate these experiments were first done on amphibian kidneys, but more recent investigations on the mammal have given basically similar results.

Experimental evidence suggests that glucose is reabsorbed in the proximal tubule and chloride ions, accompanied by sodium ions, in the distal tubule. Urea is not reabsorbed at all; indeed there is evidence that it may be actively secreted into the tubules from the blood. Water is reabsorbed in both the glucose rises in tubules which have been treated with phlorizin. Phlorizin renders the cells incapable of reabsorbing glucose so that any increase in its concentration must be because of the removal of water. Water is also reabsorbed in the collecting ducts.

Since Richards did his experiments on amphibian kidneys, comparable investigations have been carried out on mammals. It has been found that in the mammalian kidney all the glucose and approximately 80 per cent of the water and salt (sodium chloride) are reabsorbed in the distal tubule; and most of the remaining water is reabsorbed in the distal tubule and collecting duct by a mechanism which depends on the loop of Henle. Although not all urea is eliminated, there is evidence that in some mammals it is actively secreted into the tubules from the surrounding capillaries. In man the composition of the resulting urine, relative to the glomerular filtrate, is normally: glucose nil, water 5 per cent, salt (Na+) 10 per cent, and urea 80 percent. With so much water removed from it, the urine is markedly hypertonic to the blood.

The reabsorption of water can be explained, at least in part, by osmosis. The blood in the capillaries enveloping the proximal tubule is derived from the efferent vessel of the glomerulus. It is therefore rich in proteins which exert an appreciable osmotic pressure. Moreover, it is under a low hydrostatic pressure. Both these factors favor the passage of water molecules from the tubules into the capillaries.

There is good reason to believe that the reabsorption of glucose and salts involves active transport. Diffusion alone cannot account for the transfer of these materials for it occurs against a concentration gradient. That the process is an active one involving the expenditure of energy is supported by the fact that it can be slowed down or stopped by treating the tubules with a metabolic poison such as cyanide or dinitrophenol.

The Fine Structure of The Kidney Tubule Cells

The fine structure of the cells lining the tubules correlates well with their function of reabsorption. The inner surface of the epithelial cells of the proximal tubule (and to a lesser extent the distal tubule) bears numerous microvilli about 1µm in length. These are so numerous that in man the total surface area achieved by the proximal tubules of the two kidneys is of the order of 50 square meters. This helps to explain the fact that over two thirds of the water in the renal fluid is reabsorbed in the proximal tubule.

The relationship between the epithelial cells and the enveloping capillaries is extremely intimate. The surface area on the capillary side of the epithelial cells is increased by infoldings of the cell membrane. Between these infolding lie numerous mitochondria which presumably supply energy for the active absorption of salts and glucose. This is seen in both the proximal and distal tubules though it is more pronounced in the latter.

The Role of The Loop Of Henle

It is in the interests of a terrestrial animal to conserve water. In mammals this function is performed by the loop of Henle. Mammals are the only vertebrates which can produce markedly hypertonic urine that is urine which has a greater solute concentration than the blood plasma. It is interesting that desert mammals produce particularly concentrated urine and have an extra long loop of Henle.

What exactly does the loop of Henle do? At one time it was thought that it directly reabsorbed water back into the bloodstream, but its role is now thought to be more subtle than that. It seems that it concentrates sodium chloride in the medulla of the kidney. This then causes vigorous osmotic extraction of water from the collecting ducts thereby concentrating the urine and making it hypertonic to the blood.

In achieving this the loop of Henle employs the principle of a hair-pin countercurrent multiplier. As the renal fluid flows along the ascending limb, sodium chloride is actively removed from it and deposited in the descending limb very slightly above that in the ascending limb, the so-called unit effect. The effect at any one level is slight, but the overall result is multiplied by the length of the hair-pin. As the renal fluid flows down the descending limb towards the apex of the loop it becomes more and more concentrated; as it flows up the ascending limb it becomes more and more dilute. The effect of the system is to produce a region of particularly high salt concentration in the deep part of the medulla. The collecting duct passes through this region before opening into the pelvis. As the renal fluid passes down the collecting duct water is extracted from it by osmosis. This raises its concentration, resulting in the production of markedly hypertonic urine.

What the loop Henle is really doing is to increase the solute concentration of the kidney tissue. Its characteristic U-shape provides a counter-current system which establishes and maintains this high concentration. The effectiveness of the kidney in retaining water will be realized from the fact that of the 120cm3 of fluid filtered per minute only 1cm3 reaches the ureter. Over 99 percent of fluid is reabsorbed in the kidney tubules. It has been estimated that if the kidney stopped reabsorbing water, complete dehydration of the body would occur in less than three minutes.