Newton discovered an example of interference which is known as “Newton’s rings”. In this case a lens L is placed on a sheet of plane glass, L having a lower surface of very large radius of curvature. By means of a sheet of glass G monochromatic light from a sodium flame, for example, is reflected downwards towards L; and when the light reflected upwards is observed through a microscope M focused on H, a series of bright and dark rings is seen. The circles have increasing radius, and are concentric with the point of contact T of L with H.

Consider the air-film PA between A on the plate and P to the microscope, while the remainder of the light passes straight through to A, where it is also reflected to the microscope and brought to the same focus. The two rays of light have thus a net path difference of 2t, where t = PA. The same path difference is obtained at all points round T which are distant TA from T; and hence if 2t=mλ, where m is an integer and λ is the wavelength, we might expect a bright ring with centre T. Similarly, if 2t = (m + 1/2) λ, we might expect a dark ring. 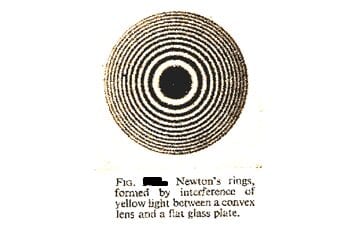 When a ray is reflected from an optically denser medium, however, a phase change of 180o occurs in the wave, which is equivalent to its acquiring an extra path difference of λ/2. The truth of this statement can be seen by the presence of the dark spot at the centre, T, of the rings. At this point there is no geometrical path difference between the rays reflected from the lower surface of the lens and H, so that they should be in phase when they are brought to a focus and should form a bright spot. The dark spot means, therefore, that one of the rays suffers a phase change of 180o. Taking the phase change into account, it follows that

and where m is an integer. Young verified the phase change by placing oil of sassafras between a crown and a flint glass lens. This liquid had a refractive index greater than that of crown glass and less than that of flint glass, so that light was reflected at an optically denser medium at each lens. A bright spot was then observed in the middle of the Newton’s rings, showing that no net phase change had now occurred.

The grinding of a lens surface can be tested by observing the appearance of the Newton’s rings formed between it and a flat glass plate when monochromatic light is used. If the rings are not perfectly circular, the grinding is imperfect.

MEASUREMENT OF WAVELENGTH BY NEWTON’S RINGS

The radius r of a ring can be expressed in terms of the thickness, t, of the corresponding layer of air by simple geometry. Suppose TO is produced to D to meet the completed circular section of the lower surface PQ of the lens, PO being perpendicular to the diameter TD through T, Fig. 29.10. Then, from the well-known theorem concerning the segments of chords in a circle, TO. OD = QO. OP. But AT = r = PO, QO = OP = r, AP = t = TO, and OD = 2a – OT = 2a – t.

But t2is very small compared with 2at, as a is large.

The radius r of a particular ring can be found by using a travelling microscope to measure its diameter. The radius of curvature, a, of the lower surface of the lens can be measured accurately by using light of known wavelength λ1, such as the green in a mercury-vapour lamp or the yellow of a sodium flame; since a = r2/(m+½) λ1 from (3), the radius of curvature a can be calculated from a knowledge of r, m, λ1.

When Newton’s rings are formed by sodium light, close examination shows that the clarity, or visibility, of the rings gradually diminishes as one moves outwards from the central spot, after which the visibility improves again. The variation in clarity is due to the fact that sodium light is not monochromatic but consists of two wavelengths, λ2, λ1, close to one another. These are (i) λ2 = 5890 x 10-8cm (D2), (ii) λ1 = 5896 x 10-8cm (D1). Each wavelength produces its own pattern of rings, and the ring patters gradually separates as m, the number of the ring, increases. When mλ1 = (m + ½)λ2, the bright rings of one wavelength fall in the dark spaces of the other visibility is a minimum. In this case

At a further number of ring m1, when m1λ1 = (m1 + 1)λ2, the bright (and dark) rings of the two ring patterns coincide again, and the clarity, or visibility, of the interference pattern in restored. In this case.

It may be noted here that the bands in films of varying thickness, such as Newton’s rings and the air-wedge bands, p.692, appear to be formed in the film itself, and the eye must be focused on the film to see them. We say that the bands are “localized” at the film. With a thin film of uniform thickness, however, bands are formed by parallel rays which enter the eye, and these bands are therefore localized at infinity.