Before we begin to explain the  Lummer – Brodhun Photometer, lets first explain what a  Photometer is.  A photometer is an instrument which can be used for comparing the luminous intensities of sources of light. One of the most accurate forms of photometer was designed by LUMMER and BRODHUN, and the essential features of the instrument are illustrated in the image below. 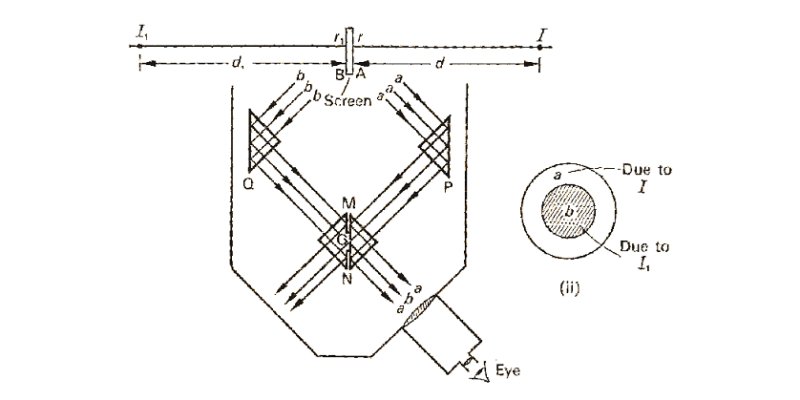 Lamps of luminous intensities I1 and 12 respectively are placed on opposite sides of a white opaque screen, and some of the diffusely reflected light from the opposite surfaces A, B is incident on two identical totally reflecting prisms P,O,. The light reflected from the prisms then passes towards the “Lummer-Brodhun cube”, which is the main feature of the photometer. This consists of two right-angled isosceles prisms. In optical contact at their central portion C, but with the edges of one cut away so that an air-film exists at M, N all round C between the prisms. The rays leaving the prism P are thus transmitted through the central portion C of the “cube”, but totally reflected at the edges. Similarly, the rays reflected from the prism Q towards the “cube” are transmitted through the central portion but circular patch b of light due initially to the light from the source of intensity I1, and an outer portion α due initially to the light from the source of intensity I2 (refer to the figure above)

In general, the brightness of the central and outer portions of the field of view in a Lummer-Brodhun photometer is different, so that one appears darker than the other. By moving one of the sources, however, a position is obtained when both portions appear equally bright, in which case they cannot be distinguished from each other and the field of view is uniformly bright. A “photometric balance” is then said to exist.

The ratio of the intensities are hence proportional to the squares of the corresponding distances of the sources from the screen.

The figures above compares Luminous intensities

In this case(figure 1), if I1 is the intensity of the lamp and d1 is its distance from the section,

The remaining lamp I is then used instead of the lamp I1, and a photometric balance is again obtained by moving this lamp, keeping the position of the lamp I2 unaltered, (Figure 2). Suppose the distance of the lamp I from the screen is d. Then. 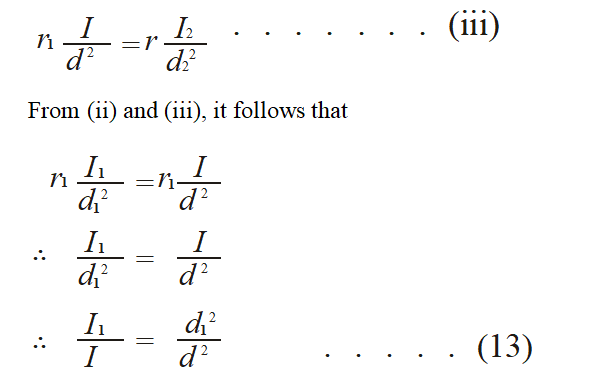 The intensities I1, I are hence proportional to the squares of the corresponding lamp distances from the screen. It should be noted from (13) that the auxiliary lamp’s intensity I s not required in the comparison of I1 and I, nor is its consult distance d2 from the screen required.

It was pointed out at the beginning of the chapter that the maintenance of standards of illumination plays an important part in safeguarding our health. It is recommended that desks in class-rooms and offices should have an illumination of 60-110 lux, and workshop an illumination of 120-180 lux; for sewing dark materials an intensity of 180 – 300 lux is recommended, while 1200 lux is suggested for the operating table in a hospital.

Photovoltaic cell: There are two types of meters for measuring the illumination of a particular surface. A modern type is the photovoltaic cell, which may consist of a cuprous oxide and copper plate, made by,

Oxidizing one side of a copper disc D,(See Figure above). When the oxide surface is illuminated, electrons are emitted from the surface whose number is proportional to the incident luminous energy, and a current flows in the microammeter or sensitive moving-coil galvanometer G which is proportional to the illumination. The galvanometer is previously calibrated by placing a standard lamp at known distances from the disc D, and its scale reads lux directly. The figure above illustrates an “AVO Lightmeter”, which operates on this principle; it is simply laid on the surface whose illumination is required and the reading is then taken.