You Are Here: Home » How to Identify Enterococcus Using the Litmus Milk Decolorization Test 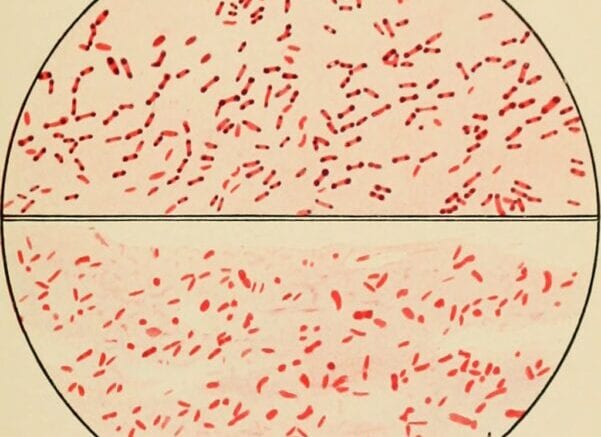 The litmus milk decolorization test is a rapid inexpensive technique to assist in the identification of enterococci. It is based on the ability of most strains of Enterococcus species to reduce litmus milk by enzyme action as shown by decolorization of the litmus.

A heavy inoculum of the test organism is incubated for up to 4 hours in a tube containing litmus milk. Reduction of the litmus milk is indicated by a change in colour of the medium from mauve to white or pale yellow.

Important: A heavy inoculums of the test organism must be used. Scraping the loop three times across an area of heavy growth is recommended.

READ MORE:  Complete Description of the Structure of Nucleic Acids

2. Incubate at 35 – 37oC for up to 4 hours, examining at half hour intervals for a reduction reaction as shown by a change in colour from mauve to white or pale yellow (compare with the positive control).

Note: The incubation time should not be more than 4 hours because some strains of viridans streptococci will reduce litmus milk with prolonged incubation.

No change or a pink colour ………….. Probably not Enterococcus

READ MORE:  Why Is It So Hard to Make a Universal Flu Vaccine?

Note: The work of Schierl and Blazevic* demonstrated that up to 83% of Enterococcus could be identified by the rapid litmus milk reduction test. A negative result can be checked by culturing the organism in aesculin broth and examining daily for up to 7days of aesculin hydrolysis as shown by a blackening in the medium, Enterococci hydrolyze aesculin.

This test can be economically performed using a Rosco bile aesculin tablet (Bile esculin 404 – 21). The tablets are available from Rosco Diagnostica. They have good stability (3 – 4y).

The test can be performed by placing a tablet on a blood agar plate inoculated with the test organism and incubating is at 35 – 37oC overnight. A positive test is indicated by the tablet and colonies around it turning black/grey. A negative test is shown by the tablet remaining white and no change in colour of the colonies. A zone of inhibition may appear around the tablet.

Alternatively, the test can be performed by making a dense suspension of the test organism in 0.25 ml of physiologically saline in a small tube, adding a tablet, and incubating at 35 – 37oC for 4 hours (for overnight). A positive reaction is shown by a black/grey colour in the medium.

Note: An aesculin hydrolysis can also be performed by incubating the test organism on bile aesculin agar but this medium is expensive and only available in 500g pack size.