You Are Here: Home » How to Identify Corynebacterium Diphtheriae from Throat and Mouth Specimens 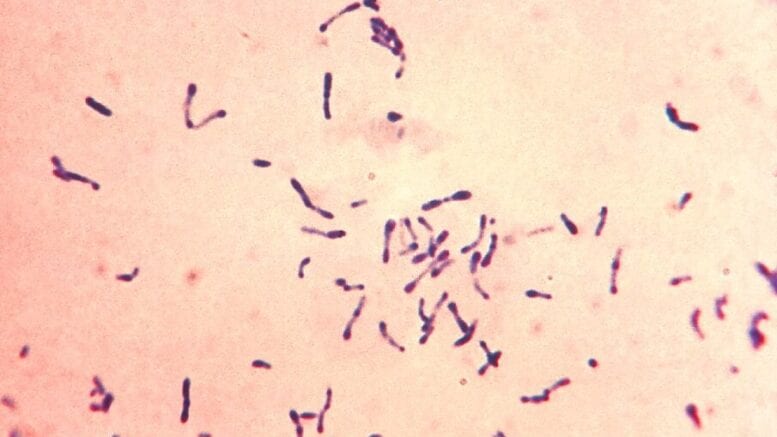 Corynebacterium diphtheriae is the causative organism for diphtheria. It can be identified and isolated in the medical laboratory by following the procedures described below. Remember that all samples and specimens must be collected aseptically to avoid cross-contamination which may lead to false positive or false negative result.

Note: Beta-haemolytic streptococci produce larger zones of haemolysis when incubated anaerobically. A minority of Group A Streptococcus strains will only grow anaerobically.

Culture of Specimen when Diphtheria is Suspected

When diphtheria is suspected and culture is specifically requested, inoculate the swab on Tinsdale medium or tellurite blood agar. Incubate the plate aerobically for growth after overnight incubation.

Make an evenly spread of the specimen on a slide. Allow the smear to air-dry in a safe place. Fix and stain by the Gram technique. Use dilute carbol fuchsin (1 in 10 dilution) as the counterstain in preference to safranin or neutral red (stains Vincent’s organisms better).

Examine the smear for pus cells and Vincent’s organisms:

Other bacteria: No attempt should be made to report routinely other bacteria in a Gram stained smear from a throat swab because the throat contains a wide variety of commensals that cannot be distinguished morphologically from pathogens.

Prepare the smear as described previously under Gram smear. Fix with alcohol. Examine the smear for bacteria that could be Corynebacterium diphtheriae.

Look for pleomorphic rods containing dark-staining volution granules. The pleomorphic rods tend to join together at angles giving the appearance of Chinese letters. Pleomorphic and granule formation are best seen in smears from a Loeffler serum or Dorset egg medium culture. Smears directly from specimens may not show these features.

3. Examine and Report the Cultures

Look for beta-haemolytic colonies that could be Streptococcus pyogenes (Lancefield Group A Streptococcus). Most strains are sensitive to bacitracin as shown in colour Plate 26. However, bacitracin sensitivity cannot be completely relied on to identify S. pyogenes. The organism should be tested serologically to confirm that it belongs to Lancefield Group A or tested biochemically using the PYR test

PYR test for the presumptive identification of S. pyogenes

The cultural features of C. diphtheria on Tinsdale medium and tellurite blood agar (TBA) are described in subunit 7.18.7. When colonies suspected of being C. diphtheria are isolated, identify as follows:

The World Health Organization, WHO, in its publication Basic Laboratory Procedures in Clinical Bacteriology2advises that routine susceptibility tests on throat or pharyngeal isolates are most often not required, and may even be misleading. The major pathogens involved in bacterial pharyngitis are S. pyogenes and C. diphtheria. Benzylpenicillin and erythromycin are considered as the antibiotics of choice to treat both types of infection. In cases of diphtheria, treatment with antitoxin is also indicated.