Regnault’s dew point hygrometer is an instrument used in hygrometry to measure relative humidity. However many forms of dew point hygrometer have been devised, but we shall first describe what Dew-point means. In the evening, the earth cools more rapidly, by radiation, than the air above it. Then, on smooth surfaces such as metals, we often find a thin film of moisture. The surface has cooled to such a temperature that the water vapor in contact with it has become saturated, and has begun to condense. No fog has formed because the atmosphere in general is warmer than the cold solid, and the vapor in it is not saturated. The temperature of a cold surface on which dew just appears is called the dew-point: The dew-point can be defined as the temperature at which the saturated vapor-pressure of water is equal to the partial pressure of the water-vapor present in the atmosphere.

The Regnault dew-point hygrometer consists of two glass tubes, A, B, with silver-plated thimbles C, D cemented on their lower ends. C contains ether, into which dips a thermometer T and a glass tube R. To use this hygrometer, a sheet of glass is placed between it and ourselves, to prevent our breath from adding to the humidity of the air around it. Air can then be gently blown through the ether, by means of a scent-spray bulb connected through a rubber tube to R. In the alternative, a gentle stream of coal gas, and burn it at the end of a long tube connected to the outlet S. The gas or air passing through the ether carries away its vapor, and makes it evaporate continuously.

In doing so it cools, since it must provide its latent heat of evaporation from its own heat content. When the ether has cooled to the dew-point, a film of mist appears on the thimble C; the thimble D enables us to notice this more sharply, by contrast. At the moment when the dew appears, the thermometer T is read. The flow of air or gas through the ether is stopped, and the ether allowed to warm up. The temperature at which the dew vanishes is noted, and the mean of this and the temperature at which it appeared is taken as the dew-point, θ1. By so doing you can correct reasonably well for any difference of temperature between the ether and the outer surface of the tube.

Lastly, you take the temperature of the room, θ2, often from a thermometer in B, and look up the saturation pressures at θ1, θ2 respectively. These are given in the following table. Then, 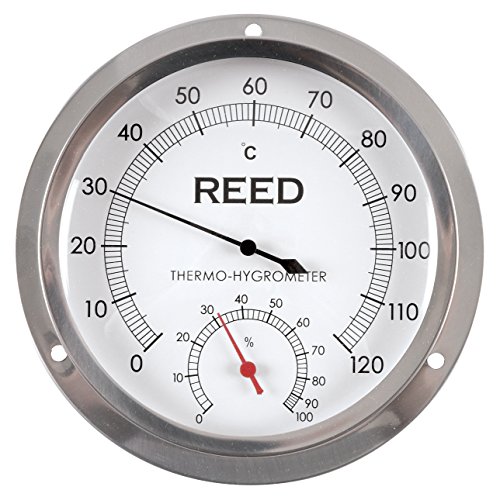