You Are Here: Home » How Does Mutual Inhibition Affect Visual Stimuli 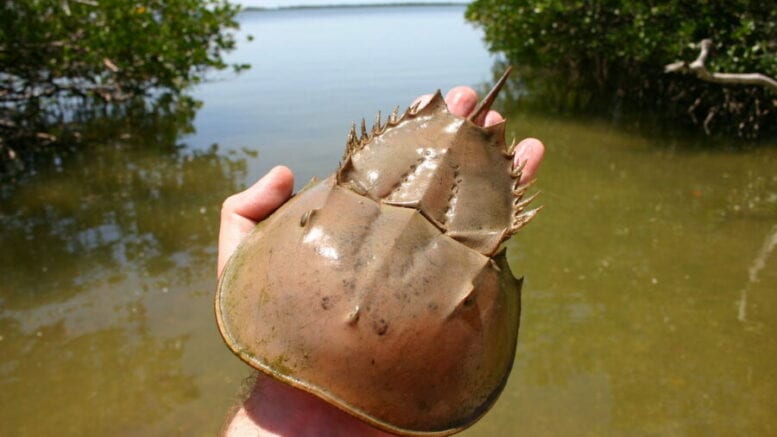 A sensory cell often has synaptic contacts with adjacent sensory units. These synapses may be inhibitory, making it more difficult for the membrane of the sensory cell to be depolarized in much the same way that inhibitory synapses lower the excitability of Post – Synaptic nerve cells. This phenomenon known as mutual inhibition has been investigated in the compound eye of limulus, the horseshoe crab. This animal, a native of the east coast of North America, is not a crab at all but a marine arachnid related to spiders.

The compound eye of Limulus lends itself particularly well to spiders. Research findings on reception of stimuli of this animal on the individual receptor units, reveals that the ommatidia, are sufficiently large for a single one to be stimulated with a fine beam of light. Impulses so generated can be recorded by micro – electrodes placed in contact with individual fibres of the optic nerve.

Research on Limulus has shown that if two ommatidia are illuminated simultaneously they fire impulses at a lower frequency than when each is stimulated on its own. It seems that the two ommatidia exert an inhibitory influence on each other, so the frequency of impulses fibred by both sensory cells is lowered.

What is the significance of this mutual inhibition?  Suppose that regions A and B of the compound eye of Limulus are illuminated simultaneously, A with a strong beam of light, B with weaker light. Each group of stronger inhibitory effect on B than B does on a. the result is that the beam of light illuminating region A is not registered, in terms of impulse frequency, as brightly as it really is, but the difference between the intensities of the two lights appears greater than it really is. In other words the contrast between well illuminated and dimly illuminated objects is exaggerated. This reciprocal inhibition is greatest between immediately adjacent regions of the eye. The further apart they are, the smaller is their inhibitory influence over each other.

The importance of this from the visual point of view is that it heightens the contrast at light – dark boundaries and therefore enhances contours, an effect which is well known in human vision and is often accentuated by artists in their drawings and painting. A similar process of mutual inhibition may lead to a sharpening of the sense of pitch in the human ear.