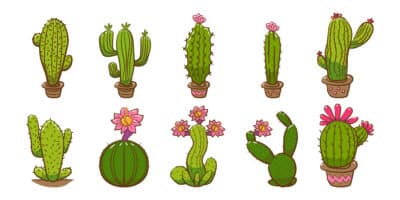 Plants are essential to life on Earth. They provide food for both humans and animals. They also produce the oxygen that other living organisms inhale. Plants produce oxygen as part of the photosynthesis process. Plants come in all shapes and sizes and can be found all over the world. Cactus plants are a diverse group of succulent plants. They thrive in dry, rocky soil. Even if it does not rain for an extended period of time, the cactus has enough water to sustain its growth because it stores water in its leaves, roots, and stems.

What Exactly is a Cactus Plant?

Cactuses, also known as cacti, are desert plants. They thrive in arid environments where other plants perish. They survive due to their ability to hold water. A sharp spine is a cactus plant adaptation that provides additional protection. These reduce the likelihood of animals eating them. Cactus come in about 1,650 different varieties or species. Cactus habitat includes dry and rocky areas similar to deserts. Cactus, on the other hand, can be grown in a variety of climates due to their adaptability.

Cushions for the areoles or spine are present.

All of these plants are perennials.

The fruit produced by cactus is called a cactus pear.

The flower petals emerge from the ovary’s top.

Except for the genus Pereskia, which has barely visible leaves, cacti plants are almost entirely leafless.

The plants are classified as dicotyledonous.

The stems are globular, ovoid, or cylindrical, with many ribs, acute or rounded, straight wavy, or spiral.

The flowers grow on the tops or sides of the areoles.

How have cacti evolved to survive in dry environments?

This is an intriguing question that everyone finds fascinating. The following are the distinguishing characteristics of cactus adaptation in points:

The majority of desert cacti have a cactus stem that is modified in a variety of ways, including the addition of spikes to protect it from predators. They can be long or short, thick and spiky or thin and hairlike, bristly, woolly, needle-like, barbed, hooked, straight or curved. Their colors are also distinct.

Cacti have a waxy coating on their stems called a cuticle that helps to keep moisture inside the plant. The cuticle covering cactus stems is impervious and extremely thick when compared to the outer skin of most plants. A complex network of shallow roots that run the length of the soil’s surface. This allows them to absorb as much water as possible when it rains and to access any surface moisture caused by fog, mist, or morning dew.

READ MORE:  What Is A Black Hole? Unraveling this Strange Phenomenon

Cactus roots develop temporary root hairs when it rains, which is an intriguing way for them to conserve water and avoid water loss.

As a result of the rapid growth of these root hairs, the surface area of the root system in contact with the soil rapidly increases.

One of the most notable adaptations of cactus is the absence of leaves. Because of photosynthesis and the need for pores to take in carbon dioxide and release oxygen, cacti no longer require leaves.

Cactus leaves have a flat design that increases their surface area relative to the amount of interior tissue they contain and maximizes their exposure to sunlight. Because of their large surface area, leaves have a large number of stomata.

Here Are Some Interesting Cactus Facts

The majority of cactus species thrive in hot, dry environments. They are common in Mexico and many parts of North America’s southwestern United States. Cactuses, on the other hand, can be found in mountains, rainforests, and even Alaska and the Antarctic Peninsula.

READ MORE:  Parasitism and the Adaptive Characteristics of Parasites

Because it rarely rains in the desert, cacti store a lot of water when it rains to deal with the desert’s dry and hot conditions.

To conserve water, the cactus will go to great lengths, including only opening its stomata at night.

Propagation is required for the growth of new plants within the same species. Spines blown around by strong desert winds or pierced by animals frequently end up in unexpected places. The spines then grow into cacti plants, ensuring the survival of the plants after the older ones die of old age.

Cacti are a diverse group of desert plants that can be grown in a variety of climates. A cactus has various parts that help it adapt to the harsh conditions of the desert. Other intriguing cactus adaptations include spines, in addition to their unusual growth patterns and lack of leaves. All cacti have spines, though some only have them in their juvenile stages. Surprisingly, cactus spines serve several important functions, including protecting the plant from the harmful effects of the sun, conserving water, and even collecting moisture.