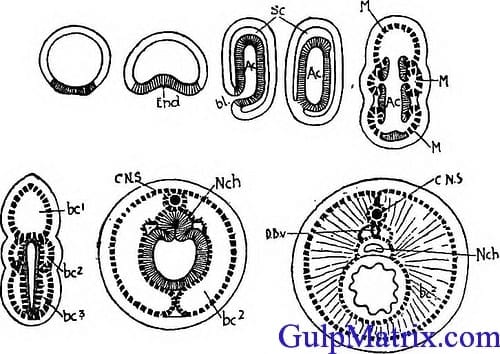 What exactly is gastrulation? This technical term may seem very unfamiliar even to the very learned because it is rarely used in discussions and appears less often in texts when compared to other technical terms used in biology or medicine. Gastrulation means the ‘formation of a gut’ or better put, ‘gut formation’. It is the process that takes place as a result of the various movements of the cell and this cell movement leading to gastrulation varies from one species to the other. In a simple form, gastrulation involves invagination at one end of the blastula(a spherical mass of cell) which has a fluid filled cavity referred to as blastocoel. It’s just like pushing a tennis ball into the blastula with the resultant formation of a two layered cup shaped structure known as gastrula. Here, the outer cell layers known as the ectoderm gives rise to the associated structures and the skin; the inner cell layers known as the endoderm forms the lining of the gut including other structures.

When gastrulation occurs, it results in the total obliteration of the blastocoels which is replaced by an entirely new cavity referred to as the archenteron(primitive gut). The opening of the archenteron to the exterior where the invagination has occurred is called blastopore and this blastopore represents the future posterior end of the embryo. During gastrulation, the lips of the blastopore represent that point where cells that initially lined the blastula, turn inwards and forms the lining of the archenteron. These cells such as the chorda-mesoderm are destined to give rise to the notochord and the mesoderm respectively.

READ MORE:  The Role of DNA in Protein and Enzyme Synthesis