You Are Here: Home » Functional Roles of Neurones, Nerves and Myelinated Fibres 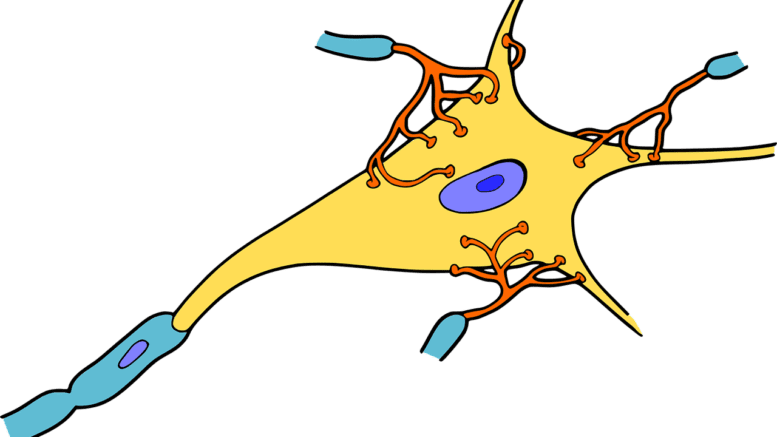 The cells which constitute neurones, nerves and the myelinated fibres and indeed the nervous tissue always show branching protoplasmic processes, some of which may be very long. There is no intercellular substance, the cells being packed in with a little connective tissue, but mainly with neuroglia cells. In understanding the roles these cells play in nervous transmission, we shall take a closer look at each of these cells.

The Role of the Neurons

Each neurone has at least two branched process. One, called the axon carries impulses away from the cell body; in neurosecretory neurons droplets of hormone pass along the outside of the axon to be discharged at its end. Other processes, called dendrites carry impulses into the cell body. Both axons and dentrite may be very long, e.g a tendrite carrying an impulse from a skin receptor on a hand has it cell body in a dorsal ganglion; an axon from a cell body in the brain can extend to a hind limb muscle. Both axons and dendrites end in fine tufts called terminal arborizations, each fibril of which ends in a synaptic knob which is very close to another neurone or to an effector cell There are slight gaps known as the synapses. Cell bodies range in size from 2µm to 100µm; the most common shapes are rounded, stellate, phramidal and flask-shaped. There is always a large nucleus with a pronounced nucleolus, and in stained preparations, rod-like Nissl granules can be seen; they are absent from the region where the axon arises. Ramifying through the cytoplasm are minute neurofibrils.

These have a central core, the axis cylinder, surrounded by a white lipid myline sheath, and enclosed in a delicate membrane, the neurilemma, outside which is a fine layer of connective tissue. The axis cylinder is jelly-like and is a continuation of the cytoplasm of the neurone. It contains neurofibrils and many mitochondria and is unbroken from its emergence to its termination. The myeline sheath, continuous within the central nervous system, is interrupted in the peripheral fibres by constrictions, the nodes of Ranvier. The sheath is formed by the cells of Schwann cells lose their cytoplasm ad the sheath then consists of many layers of plasma membrane. The neurilemma consists of thin tubular cells with one large nucleus in each intermodal segment. It is continuous over the nodes of Ranvier.

the fibre acquires a myelin sheath shortly after its emergence from the cell body. The sheath continues, except for the nodes of Ranvier, along the length of the fibre and is lost just before the final nerve- ending.

READ MORE:  Common Signs That You Are Not Getting Enough Protein

There is no myelin sheath but only an axis cylinder enclosed by the neurilemma and by connective tissue. The nuclei of the neurilemma cause characteristic swellings along the fibre.

A nerve consists of a bundle of fibres bound up with a connective tissue sheath called the epineurium. In growth of this divide the fibres into smaller bundles each enclosed by a perineurium. Within these smaller bundles, each fibre is separated from the others by further in growths of connective tissue, the endoneuria. Passing mainly longitudinally in the connective tissue are blood-vessels and lymphatics, and there is always some adipose tissue present.

Nerves are described according to the directions in which impulses are conducted by the fibres. Nerves containing only fibres which carry impulses into the central nervous system are called sensory or afferent nerves. Those which contain fibres carrying only outwards impulses are called motor or efferent nerves. Many of the nerves have afferent and efferent fibre; they are known as mixed nerves. Examples of sensory nerves are the olfactory, optic and auditory; examples of motor nerves are the oculomotor, pathetic and abducens; the trigeminal, facial, glossopharyngeal and vagus are mixed nerves. All the spinal nerves are mixed; at the point of separation just lateral to the spinal cord, the afferent fibres proceed via the dorsal root.

Seven types of receptor nerve-ending are considered here: In striated muscle there are spindle-organs, each consisting of a spindle enclosed in connective tissue and containing several muscle fibres. Nerve fibres enter each spindle and end as spiral round the individual muscle fibres or as arborization. Epithelial tissues are penetrated by fine non-myelinated fibres which end as arborization with varicose endings in the inter-cellular substance. There are several types of sensory ending in epithelian and connective tissues. Some are simply terminal arborizations, some are tactile corpuscles, end-bulbs and pacinian corpuscles. Tactile corpuscles are common in the dermal papillae. The connective tissue of the nerve sheath is continuous with that of the corpuscle; the nerve fibres arborize among the flattened cells of the inner lining. End-bulbs are small bulbous swellings formed by thickening of the connective tissue sheath. Within the bulb is soft granular cytoplasm encased by squamous cells. The axis cylinder may lie in the cytoplasm whole or form a branching network. End-bulbs are common in the papillae of the tongue, in the lips, the conjunctiva, in tendons and in the peritoneum. A pacinian corpuscle may be as large as a pin’s head. They consist of concentric layers of connective tissue bounded on the inside and outside by squamous epithelium. In the cytoplasmic corea single nerve fibre proceeds as a straight thread, branching somewhat at the distal end. These corpuscles are plentiful, occurring most commonly in the ski of the hands and feet, in tendons and ligaments, and in some animals, they are easily seen in the mesentery.

The organs of Ruffini, sensitive to warmth, are cylindrical bundles of connective tissue containing flattened expansion of axis cylinders the bulbs of Krause, sensitive to cold, are similar to end-bulbs, but smaller. Both types are located in the dermis of the skin

Motor nerve ending are also of various types. In voluntary muscle, there are characteristic end-plates. The neurilemma sheath with some of its nuclei spreads out over a muscle fibre. The axis cylinder penetrates into the sacoplasm and splits up into arborization which end in small varicose expansions. In cardiac and involuntary muscle there are no end-plates; the nerve fibres branch and end in small varicose swellings. The nerve fibres form a network beneath the basement membrane of glandular tissue. From the network, fine fibres penetrate into the intercellular substance.

The various type of neuroglia form a packing tissue in the brain, spinal cord, and in ganglia. Connective, tissue, which is the normal packing in organs, is scanty in the central nervous system, and its place is taken by neuroglia consisting of four types of cells. They are fibrous astrocytes, are found principally in the white matter among the myelinated fibres the cells have thick processes which branch, and some show peculiar dilatations, called pedicles, which abut on small blood-vessels.

The protoplasmic astrocytes are most plentiful in the grey matter. The cells have thick branched processes somewhat similar to pseudopodia. Oligodendroglia cells are found in both white and grey matter. They have few very fine processes which show very branching. Microglia cells are more numerous in grey matter than in white. The cell bodies are small and elongated and from each end arises a thick process which branches freely. All the branches show numerous lateral twigs. These cells are phagocytic and represent the defense mechanism of the central nervous system. They can assume spherical form and exhibit amoeboid motion.

3 Brain Myths That Are Believed To Be True

Be the first to commenton "Functional Roles of Neurones, Nerves and Myelinated Fibres"