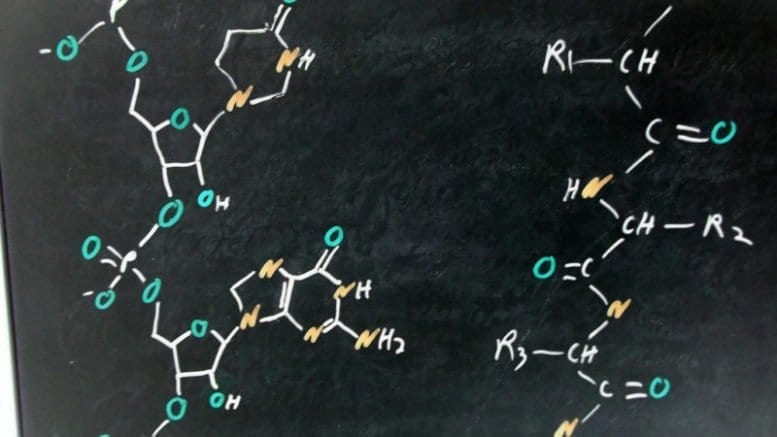 How is messenger RNA formed? Before attempting to answer this question let us think what messenger RNA has to do. A typical protein contains about 200 amino acid sub-units. If the triplet hypothesis is correct the instructions required for assembling such a protein will involve at least 600 bases in DNA. In terms of the one gene-one protein concept, this would constitute a single gene. At a conservative estimate there are at least million such genes in a human cell (even a bacterial cell contains about thousand) so a tiny fraction of the full DNA complement is involved in the production of one particular protein 1 what all this boils down to is that a given messenger RNA molecule is ;required to carry instruction from only a very short section of a DNA molecule. The important thing is that the messenger RNA should copy exactly the sequence of bases in this short section of the DNA.

The simplest way of explaining is to assume that the appropriate part of the DNA molecule serves as a template for the formation of messenger RNA. It is envisaged that the double helix of DNA unzips in the relevant region and that free RNA nucleotides align themselves opposite one of its two strands. Because of the complementary relationship between the bases, cytosine pairs with guanine, and adenine, with uracil. Once assembled, the messenger RNA molecule peels off its DNA template and moves out of the nucleus, probably through the pores in the nuclear membrane, into the cytoplasm. Meanwhile the unzipped section of the DNA zips up again. Clearly the sequence of bases in the completed RNA molecule will be identical with one of the two strands of the DNA, the one which did not act as the template. Recent work has filled in many of the chemical details of how messenger RNA is formed, what enzymes are involved and where the necessary energy comes from.

How Are Proteins Assembled?

When the messenger RNA gets out into the cytoplasm it attaches itself to the surface of ribosome where it causes the assembly of a protein. This it does through the intermediacy of yet another kind of nucleic acid called transfer RNA. It is a comparatively short molecule, shaped like a clover leaf but with the strand double-backed on itself and twisted into a helix. One part of the molecule has three unpaired bases projecting from it and these vary from one molecule to another.

Now it is known that the cell possesses at least as many types of transfer RNA molecules as there are types of amino acids. The three unpaired bases at the other end then link up with the appropriate triplet in the messenger RNA molecule. In this way the amino acids are lined up in an order corresponding to the sequence of base triplets in the messenger RNA. As the latter is determined by the sequence of base triplets in the original DNA, it follows that the base sequence in the DNA determines the order in which amino acids line up on the ribosome.

The Role of the Ribosomes In Protein Synthesis

Clearly one function of the ribosomes is to provide a suitable surface for the attachment of messenger RNA and the assembly of protein. But there is more to it than this. It is now known that ribosomes occur in groups, or chains, called polyribosome or polysomes. In the electron microscope a polysome is seen to consist of from 5 to 50 individual ribosome’s: the exact number varies from one type of cell to another. Special staining techniques show these to be connected by a thin thread 1.0 to 1.5 nm in diameter, which is about the thickness of a single strand of RNA. That this strand really is RNA is suggested by the fact that it is readily dissolved by ribonuclease, an enzyme which splits RNA into its constituent nucleotides.

It should be emphasized that no has ever watched this process actually taking place. The evidence, much of it indirect, it based on very sophisticated experiments involving, for example, separating the individual ribosomes with each one. You should consult more detailed books on molecular biology for further details.

Ribosome’s have been likened to computer-controlled machine tools. Each individual ribosome may be regarded as a single machine tool for assembling a polypeptide chain from amino acid building blocks. Just as the product of a programmed machine tool depends on the instructions contained in the computer tape, so the particular polypeptide turned out by a ribosome is determined by the instructions encoded in the messenger RNA strand. Messenger RNA is therefore analogous to computer tape.  In a factory each machine tool has its own tape but in the cell a group of identical ribosome’s all share the same messenger RNA, thereby increasing efficiency and achieving maximum economy of function within the cell.