The chemical formula of Formaldehyde is CH2O. This formula represents 1 atom of carbon, 2 atoms of hydrogen and 1 atom of oxygen present in Formaldehyde.

– Appearance: Formaldehyde is a colorless gas. 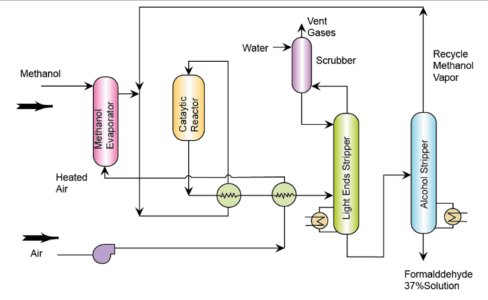 The production of formaldehyde started in the 1880’s in Germany, but the development of a methanol synthesis pathway (route) in the 1920s gave the spur to the development of large-scale production. There are two main routes present today: the first route is oxidation-dehydrogenation using a silver catalyst involving either the complete or incomplete conversion of methanol; and the second route is the direct oxidation of methanol to formaldehyde using metal oxide catalysts (Formox process).

In the silver catalyst route, which happens to be the first route, vapourised methanol with air and steam is passed over a thin bed of silver-crystal catalyst at about 650oC. Formaldehyde is produced from the dehydrogenation of methanol. The quantity of heat expected for the endothermic reaction is gotten from burning hydrogen contained in the off-gas produced from the dehydrogenation reaction.

The second route uses the oxidation of methanol over a catalyst of molybdenum and iron oxide. A mixture of air and methanol is vapourized and made to pass through a catalyst-packed reactor tubes.

A large amount of alternative feed stocks have been considered but not found to be economic. For example, a little quantity is gotten from the non-catalytic oxidation of propane-butane mixtures. Formaldehyde can be gotten from methane but a mixture of products needs to be separated. And it is a byproduct of the oxidation of naphtha to acetic acid. 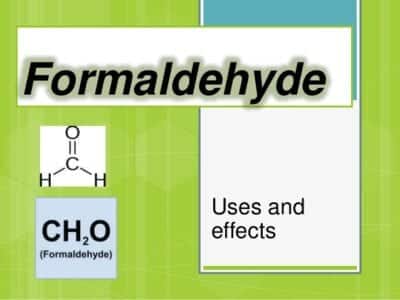 1. Formaldehyde is a colorless, strong-smelling gas that is used in producing building materials and many household products. It is used in products like pressed-wood, particleboard, plywood, and fiberboard; glues and adhesives; permanent-press fabrics; paper product coatings; and certain insulation materials. It is also used to make other chemicals.

2. Formaldehyde breaks down easily in air – generally within hours. It also dissolves easily in water, but does not last long there, either.

3. When dissolved in water, Formaldehyde is called formalin, which is commonly used as an industrial disinfectant, and as a preservative in funeral homes and medical labs. Formaldehyde can also be used as a preservative in some foods and in products, such as antiseptics, medicines, and cosmetics. Sometimes, even without being in use, substances that release formaldehyde are. These substances have been found in cosmetics, soaps, shampoos, lotions and sunscreens, and cleaning products.

4. It can also be added as a preservative to food, and it can also be produced as the result of cooking and smoking.

5. Formaldehyde occurs naturally in the environment. Humans and other living organisms make small amounts as part of normal metabolic processes.

4. Formaldehyde has less shrinkages than formalin.

5. Formaldehyde give better action of blood clot and brain.

6. Formaldehyde does not corrode.

1. Formaldehyde has a slow fixation reaction.

4. Formaldehyde fumes are irritating to the nostrils.