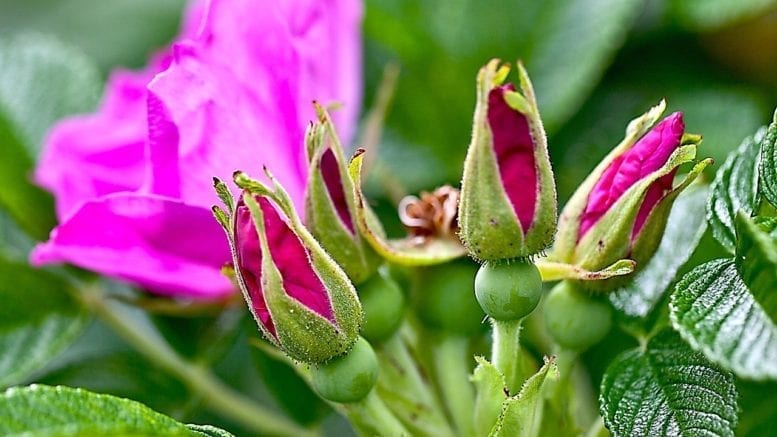 This is one of the seven British families in the order Rosales. There are a total of ninety genera of which twenty-four are represented in Great Britain. The species are nearly all perennial shrubs or trees. The inflorescence is variable and both racemose and cymos forms occur. The family may be divided into sub-families on differing floral characteristic which result from variation in the growth and shape of the receptacle. There may be very slightly perigynous flowers as in cherry, or epigynous flowers as in apple. The flowers are usually hermaphrodite, regular and with the parts cylinder arranged. The calyx is usually of five free, but imbricate or overlapping sepals, sometimes with an epicalyx (an extra ring of bracts outside the calyx). The corolla is most often of five petals is variable, being composed of 1,2,3, or 4 times the number the number of sepals. The gunaecium is also variable, sometimes of a single carpet or many apocarpous carpels or five syncapous carpels, the anatropous carpels.

The anatropous ovules usually occur one in each of the carpels when separate or two in each of the carpels when united. The styles are usually free and there are as many as there are capels. Pollination is normally by insect and nectarines may be found on the receptacle. The fruit varies from a single achene or a head of achenes, to a drupe or head of druplets or a pome. It is rarely a capsules. Members of the family may be confused with members of the Ranunculaceae but in addition to the perigynous or epigynous condition of the flower, the presence of stipules in members of the Rosacease in nearly always a point of distinction.