It goes by the name ‘Carcharocles Megalodon’, but some do prefer to call it, “The Meg”. whatever name it goes by, this colossal shark of the ocean is a terrorizing monster. it was said to terrorize the water 2 million years ago. If you are amongst those scared of the modern sharks, brace yourself for these facts because this prehistoric predator puts them all to shame. 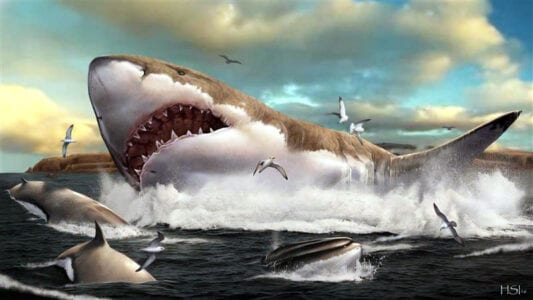 1) The Megalodon Was The Biggest Shark Ever.

This shark species was the largest the planet earth has ever experienced. it amounts to a total sum of 45 feet to 60 feet. A 60 feet megalodon is 4 times bigger than an average shark. It also weighed up to a whooping 100 Tons. In our current day, the biggest shark is the whale shark, which can grow up to 40 feet long. This means no shark could be compared to the meg’s enormous size.

2) Many Don’t Talk About It In The Modern World.

There’s currently a limited amount of megalodon’s fossils. We only see it’s skeleton which are said to be made of cartilage, which doesn’t fossil very well. Which means the only fossils about the megalodon, are it’s teeth.

Scientists have also gathered that the meg, traveled throughout the whole world, using this fossils as a guide, scientists has tried to put a picture which shows a possibility of what the meg looked like 2 million years ago, and how it lived.

This means all that remains about the meg is it’s teeth, which have been found on every continent except Asia and Antarctica.

Many of it’s fossils are mostly found in California’s SharkTooth Hill.

The sharktooth hill is a very popular site where people dig for teeth, while wearing protective hand gloves. Though their shark teeth has been buried for years, it is still very sharp to cut through human flesh. 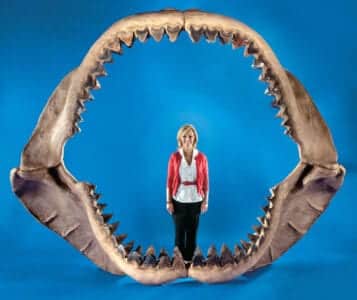 3) The Megalodon Has Enormous Teeth.

The Meg possesses big tooth with an average of 4 inches to 6  inches, though the biggest tooth was found in Peru, with the size of 7.48 inches, this also makes the amount of the teeth to be quite expensive . The word Megalodon stands form ‘Big Tooth’.

The Meg been a giant fish, needs an enormous prey to feast on. It had to roam the seven seas in order to meet it’s daily requirement of 2,500 pounds of food, which means the meg needs to feed on enormous creatures alike to quench it’s hunger.

READ MORE:  How Long Can Animals Live Without Water?

Scientists have been able to discover that fossilized whale bones have been found with bite marks, that matches the megalodon’s teeth.

5) The Meg Had Competitions.

The Megalodon wasn’t the only giant to terrorize the oceans. Livyatan Melvillei was a sperm whale that was over 60 feet long, weighed more than 50 tons, and its 14-inch teeth were the biggest of the animal kingdom.

There are other fun acts about the megalodon, check below:

A) In order to chew on the bones of its prey, the Meg needed to have a very powerful bite. To figure out how strong its bite was, a research group led by biologist Dr. Stephen Wroe conducted simulations and reported that the Megalodon could bite down on its prey with 24,000 to 40,000 pounds of pressure.

B) Popular belief has it that the great white shark is a descendant of the Meg, but that claim has been disproved. When the first fossilized teeth of the Megalodon were discovered, they placed the mighty shark in the same genus as the great white.

C) When the Megalodon was ready to give birth, it would travel to shallow waters where large predators couldn’t follow, There the baby Meg would feel quite secured and grow till it is able to defend itself from other predators.

D) The baby Meg are said to be mostly 6 feet or more when they are been born, Which means they are even bigger than an average human being, this is because the baby Meg eats it’s siblings right from the womb, wondering how this is possible?, that is because some sharks give birth to their babies alive, while some lay eggs. Since the Meg doesn’t lay egg, this explains how they give birth to live young ones.

E) The Megalodon was the top predator of the ocean… until it wasn’t. The giant shark went extinct 2.6 million years ago, and there are several theories as to why this happened.