We shall now study dynamic equilibrium in reversible chemical reactions since it has many industrial applications.

Some reactions can be made to go either way, i.e. forward or backward. Such reactions are said to be reversible, and they are easily identified by the sign ⇌

A reversible reaction is one that proceeds in both directions under suitable conditions.

For a reaction which is reversible under the same conditions, both the forward and the reverse reactions can occur at the same time if all the reactants and products are present in one container.

When A and B are mixed together, the products C and D will begin to form almost immediately and at a very fast rate. This is because the initial concentrations (or numbers of reactants particles) of A and B are high, which result in a proportionately high rate of collision of the particles (this leads to the formation of the products). Gradually, A and B become used up and the rate of formation of C and D slows down. Meanwhile, products C and D, which have been forming in ever increasing amounts, will also begin to react. This backward reaction, where C and D react to form A and B, starts slowly but becomes rapid progressively as more and more of C and D accumulate.

Eventually, the forward and the backward reactions will go on at the same rate, i.e. the number of A and B combining to form C and D will be balanced by the number of C and D breaking up to form A and B again. The concentrations of A, B, C and D remain constant, i.e. there is no observable change in the ‘properties’ of the reversible reaction, A + B                   C + D, is in dynamic equilibrium.

READ MORE:  Chemical Properties and Uses of Freons and Chlorofluorocarbons

Note: In a chemical system, ‘properties’ include concentrations and factors such as density, colour and pressure (for gases) which depend on concentration.

A reversible reaction is in dynamic equilibrium when both the forward and backward reactions are occurring at the same rate, thereby producing no net change in the concentrations of the reactions or products.

Closed System: The reversible reaction just described can only reach dynamic equilibrium in a closed system. This means that the reaction must take place in a closed container or vessel, where during the process of the reaction, all reacting species (reactants and products) are present. In an open system, i.e. one in which one or more of the substances are being removed, the reaction cannot attain equilibrium even if it is a reversible one.

Let us look at the following reversible reaction

Eventually, all the trioxocarbonate (IV) will decompose. Thus, a reversible reaction in an open system behaves like an irreversible one and is represented as follows:

The dynamic equilibrium position can be attained irrespective of the starting point of the reaction. This means that if we heat some calcium oxide and carbon (IV) oxide in a closed vessel at a constant temperature, these reactions will combine to form calcium trioxocarbonate (IV), i.e., 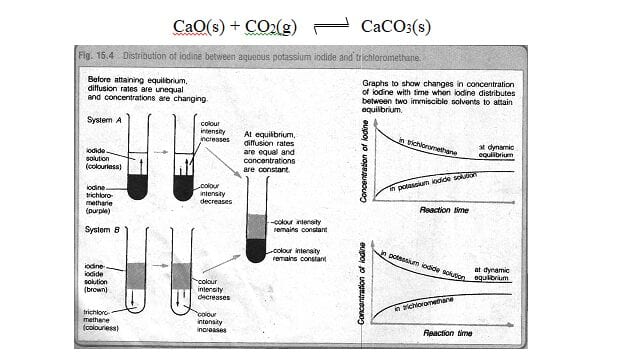 To illustrate this concept, we can use the iodine-iodide-trichloromethane system. Iodine (I2) dissolves in aqueous potassium iodide (aq KI) to give a brown solution and in trichloromethane (CHCI3) to give a purple solution. The solvents, water (in the case of aq KI) and trichloromethane, are immiscible. Using these solvents, we can set up Systems A and B and observe the colour changes that occur to study the attainment of the equilibrium position from different starting points.

Note: Trichloromethane, being denser than water, forms the lower layer in these systems.

The forward diffusion rate of iodine molecules, i.e I2 (CHCI3)            I2(aq KI), is fast at first but decreases progressively. This is indicated very clearly by the decreasing intensity of the purple colour in the lower layer. The reverse diffusion rate, i.e I2 (aq KI)       I2 (CHCI3), is slow at the beginning but increases gradually. This is reflected by the increasing intensity of the brown colour in the upper layer. Eventually, these two diffusion rates become equal. This is the position of equilibrium, and at this stages the colour intensities (which reflect the concentrations of iodine) of both the upper and lower layers remain constant.

System B: Initially, the lower layer (CHCI3) is colour-less while the upper layer (aq KI + 12) is brown. Gradually the lower layer acquires a purplish colouration as the iodine molecules diffuse into it from the upper layer. At the same time, the upper layer becomes lighter brown in colour. again, the iodine molecules move back and forth between the two solvent layers. Equilibrium is eventually attained. The colour intensities of both layers at equilibrium position are similar to those obtained in System A.

System A and B show that the same equilibrium position can be reached irrespective of whether we dissolve the iodine in trichloromethane or aqueous potassium iodide.