A constant potential difference across terminals of a circuit that produces steady current is known as Electromotive force. This electromotive force and the principles underlining its application in electricity generation and transmission would be discussed in more detail as we progress. When electricity has to be transmitted from a source, such as a power station, to a distant load, such as a factory, the two must be connected by cables. These cables have resistance, which is in effect added to the internal resistance of the generator; power is wasted in them as heat. If r is the total resistance of the cable, and I the supply current, the power wasted is I2r. The power delivered to the factory is IV, where V is the potential difference at the factory. Economy requires the waste power, I2r, to be small; but it also requires the cables to be thin, and therefore cheap to buy and erect. The thinner the cables, however, the higher their resistance r. thus the most economical way to transmit the power is to make the current, I, as small as possible; this means making the potential difference V as high as possible. When large amounts of power are to be transmitted, therefore, very high voltages are used: 132000 volts on the main lines of the British grid, 6000 volts on subsidiary lines. These voltages are much too high to be brought into a house, or even a factory. They are stepped down by transformers, in a way which we shall describe later; stepping down in that way is possible only with alternating current, which is one of the main reasons why alternating current is so widely used.

An electric heating element to dissipate 480 watts on 240 V mains is to be made from Nichrome ribbon 1mm wide and thickness 0.05mm. calculate the length of ribbon require if the resistivity of Nichrome is 1.1 x 10-6 ohm meter.

Summary of Formulae Related to Power and Ohm’s Law

In any device whatever: 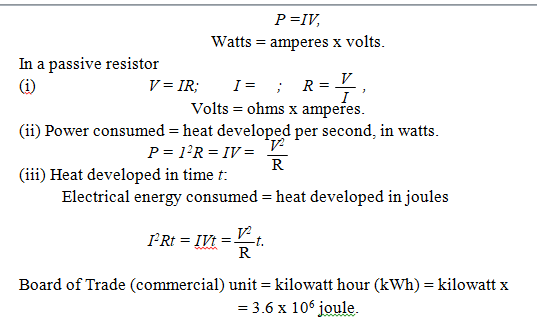 If we take a high-tension battery, and connect a high resistance voltmeter across it, the meter reads about 120 volts.

READ MORE:  How to Measure the Velocity of Sound in a Quincke Tube

To get a rigorous definition of electromotive force, let us first imagine that we pass a current through the device of diagram I below in opposition to its e.m.f. we can do this by connecting its terminals AC, via a resistance R, to a battery D which has a greater e.m.f.. If a charge Q passes round the circuit in a given time, then the work done in carrying it from A to B, against the potential difference E, is QE joules. This work appears as chemical changes in the sources of E. now suppose that we remove the battery D, and connect a resistor across the terminals AC diagram II . The potential difference will now send a current round the circuit in the opposite direction to the previous current.

Our picture of a source of current as a constant potential difference in series with a resistance is over-simplified, but it has brought us to the point where we can make a definition of e.m.f. which is both rigorous and intelligible. We shall make it first in terms of charge, later in terms of current.

In terms of charge: if a device has an electromotive force E, then, in passing a charge Q round a circuit joined to it, it liberates an amount of electrical energy equal to QE. If a charge Q is passed through the source against its e.m.f., then the work done against the e.m.f. is QE. The above definition of e.m.f. does not depend on any assumptions about the nature of its source.

If a device of e.m.f. E passes a steady current I for a time t, then the charge that it circulates is

Thus the e.m.f. of a device is the ratio of the electrical power which it generates, to the current which it delivers. If current is forced through a device in opposition to its e.m.f., then equation (18) gives the power consumed in overcoming the e.m.f.

Electromotive force resembles potential difference in that both can be defined as the ratio of power to current. The unit of e.m.f. is therefore 1 watt per ampere, or 1 volt; and the e.m.f. of a source, in volts, is numerically equal to the power which it generates when it delivers a current of 1 ampere.

Source of e.m.f. differ widely in their nature. In a thermocouple, the e.m.f. arises at the junction of the two metals this point is sometimes called the seat of the e.m.f. In a voltaic cell, we believe, the e.m.f. arises at the interfaces of the plates and solutions part at one interface, the rest at the other. In each of these sources we can distinguish between the seat, or seats, of the e.m.f., and that of the internal resistance, which is in the bulk of the solution or the wires of the thermocouple. The e.m.f. of a dynamo, however, does not arise at a point: it acts along the wires of the armature coil as they move in the magnetic field. Here, we cannot distinguish between the seats of the e.m.f. and the internal resistance. In solving circuit problems, however, it is helpful to show the e.m.f. and internal resistance separately, although as a rule they are physically inextricable.