You Are Here: Home » How Electrolysis and Electrolytic Reactions Occur in a Cell 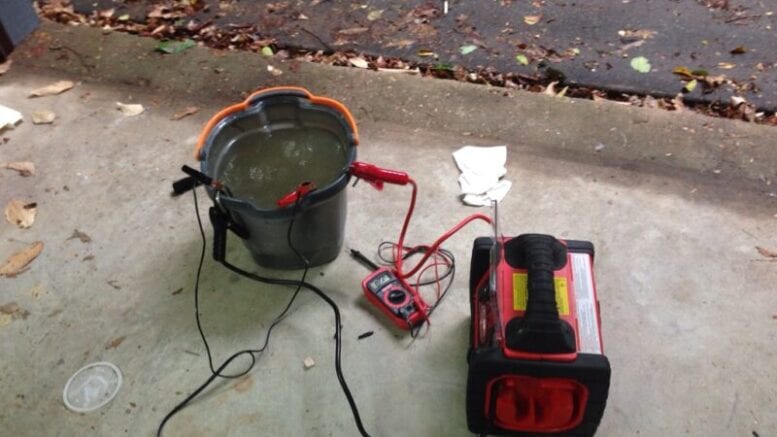 What Are Electrolytic Reactions?

Electrolytic reactions are redox reactions since they involve the transfer of electrons. Oxidation occurs at the anode where the anions lose electrons. This reaction as the andoe is know as the anode half-reaction. The cathodic half-reaction which takes place simultaneously at the cathode is a reduction reaction since the cations gain electrons here. The overall reaction is obtained by the algebraic addition of the two half-reactions.

READ MORE:  How to Easily Memorize Elements of the Electrochemical Series

The discharge of ions is governed by three conditions, namely.

1. Relative Position of Ions in the Series: The position of ions in the electrochemical series. If all other factors are constant, a cation which is lower in the series (less electropositive) will show a greater tendency to be discharged than another which is higher up (more electropositive). This is because the former gains electrons more readily form the cathode and so because discharged as a neutral atom while the latter tends to persist in solution as a positive ion. For example, K+, Na+ and Ca2+ are never discharged at all from aqueous solutions since H+ will always be preferentially discharged. Only when there is no competition with H+ or other ions will these strongly electropositive elements be discharged. Such as situation occurs during the electrolysis of the molten salts of these metals.

We can illustrate this by considering what happens during the electrolysis of a concentrated solution of sodium chloride. In this solution, there are four types of ions as shown.

At the cathode H+ are preferentially discharged although the concentration of Na+ is far greater. Here the great distance between the positions of Na+ and K+ in the series makes the effect of concentration less important.

At the anode C1– are preferentially discharged. The effect of concentration is important in this case because the positions of C1– and OH– care close to one another in the series.

3. Nature of Electrodes:Electrodes which take no part in the electrolytic reaction are described as inert electrodes. Platinum and carbon (graphite) usually behave as inert electrodes, although platinum is attacked by liberated chlorine and carbon by liberated oxygen. Some electrodes which have strong affinity for certain ions may influence ionic discharge. For example, in the electrolysis of aqueous sodium chloride using platinum electrodes, H+ are preferentially discharged. If a mercury cathode is used, however, the mercury will tend to associate with the Na+ to form sodium amalgam, Na/Hg, so that the discharge of Na+ requires less energy than that of H+, and so occurs in preference.

Other electrodes many also influence the ionic discharge because they posses characteristics similar to those of the ion in the electrolyte. For example, if a copper anode is used in the electrolysis of a solution of copper(II) tetraoxosulphate(VI), neither the SO42 nor the OH will be discharged. Instead, the copper atoms from the anode will go into solution as Cu2+ because these atoms will give up their electrons more use of in the extraction and purification of some metals.

Electrolytic Extraction of Aluminium from Bauxite and Alumina

Non-Living Inclusions of the Cytoplasm

Plant and Animal Cells and Their Functions