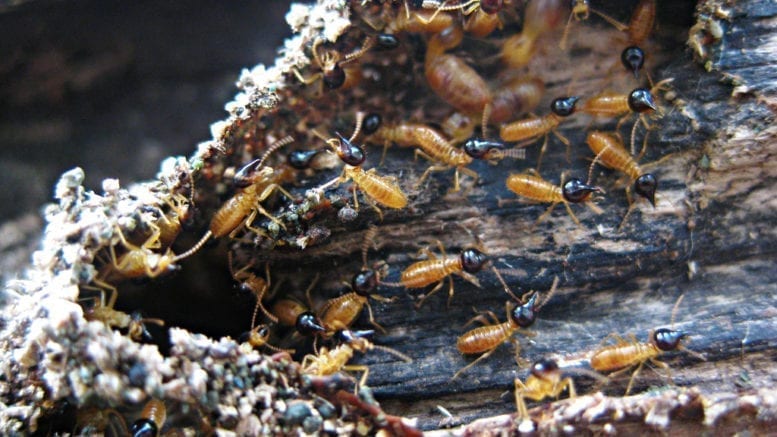 The symbiotic relationship between termite and trichonymphid is novel. The termites, which constitute the insect order isopteran, are remarkable in two respects. In the first place, they have evolved a degree of social organization which exceeds even that of the hive bees, and secondly although the major part of their diet consists of wood, they are unable to digest it. The main constituent of wood is cellulose, but there are also small quantities of sugars and nitrogenous substances. Note that very few living organisms are able to digest cellulose. The two enzymes occur together in most cases. Termites will thrive on a diet of cotton-wool, but not if the last traces of nitrogenous substances are removed.

[stextbox id=”info” defcaption=”true” float=”true”]It is now known that the termites can exist only by reason of the presence of a flourishing gut population of flagellate protozoans. These all belong to the genus Trichonympha of the order Polymastigina and are probably the most highly differentiated of the Protozoa.[/stextbox] There are a number of species of Trichonympha, ranging form 50µm to 360µm long;

All are pear-shaped. The body is divisible into three regions; a tapering anterior rostrum, a middle bell-like rego, and swollen bulbous posterior portion. These are numerous flagella of various length, arranged in longitudinal grooves. The posterior bears no flagellae  but it is overlapped by a fringe of long flagella origination in the middle zone. Longitudinal ridges traverse the firm pellicle beneath which the plasmagel consists of five successive layers. First, there is a layer of basal granules of the flagella and then a series of oblique myonemes. Beneath this is a layer which appears to consist of minute foamy bubbles, followed by a transverse series of myonemes. Finally, abutting on the plasmasol are the longitudinal myonemes. The soft central region contains the nucleus and ventrally there are many vacuoles containing minute portion of wood. There is no gullet, the particles being engulfed posteriorly by temporary cup-like indentations produced by the action of the myonemes. In this posterior region, the plasmagel has a very simple structure.

The exact nature of the relationship between termite and trichonymphid is not certain, but both are obligate symbionts, and neither can live without the other. If the termites are heated to a temperature of 40%C, they are not harmed but the trichonymphids are destroyed. Thereafter, though the termites continue to ingest food, they cannot digest it and eventually die.

From the symbiosis, the termite obtains its essential dietary requirements, probably by digesting the trichonymphid. The protozoa get their food from the termite’s gut and have, in addition, shelter and a suitable environment. They reproduce there, both by binary fission, and in some cases at least, by sexual means also. It is worthy of note that only the worker termite ingests such obstinate pabulum as wood and paper. All other adults and the larvae are fed by the workers on regurgitated and partly-digested material. During ecdysis, the workers lose most if not all of the trichonymphids, whereupon they replenish the supply by anal feeding from other termites.