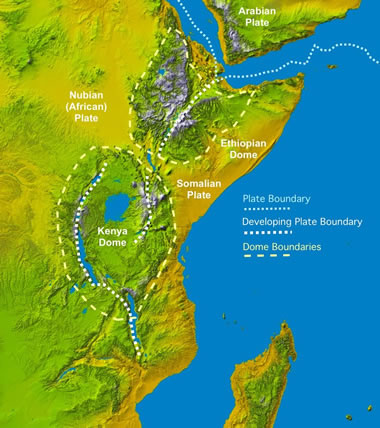 The East African Rift System (EARS) is one the geologic wonders of the world, a place where the earth’s tectonic forces are presently trying to create new plates by splitting apart old ones. In simple terms, a rift can be thought of as a fracture in the earth’s surface that widens over time, or more technically, as an elongate basin bounded by opposed steeply dipping normal faults.

Geologists are still debating exactly how rifting comes about, but the process is so well displayed in East Africa (Ethiopia–Kenya–Uganda–Tanzania) that geologists have attached a name to the new plate-to-be; the Nubian Plate makes up most of Africa, while the smaller plate that is pulling away has been named the Somalian Plate (Figure 1). These two plates are moving away form each other and also away from the Arabian plate to the north.

The point where these three plates meet in the Afar region of Ethiopia forms what is called a triple-junction. However, all the rifting in East Africa is not confined to the Horn of Africa; there is a lot of rifting activity further south as well, extending into Kenya and Tanzania and Great Lakes region of Africa. The purpose of this paper is to discuss the general geology of these rifts are and highlight the geologic processes involved in their formation. 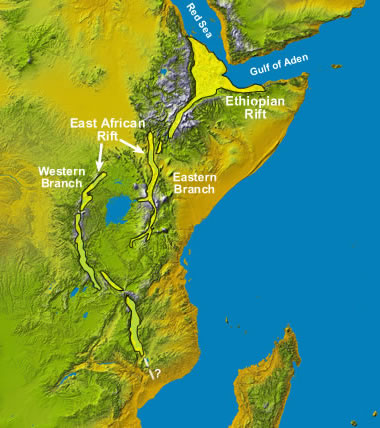 Figure 2: Rift segment names for the East African Rift System. Smaller segments are sometimes given their own names, and the names given to the main rift segments change depending on the source. Click to Enlarge. The basemap is a Space Shuttle radar topography image by NASA.

What is the East Africa Rift System?

The oldest and best defined rift occurs in the Afar region of Ethiopia and this rift is usually referred to as the Ethiopian Rift. Further to the South a series of rifts occur which include a Western branch, the “Lake Albert Rift” or “Albertine Rift” which contains the East African Great Lakes, and an Eastern branch that roughly bisects Kenya north-to-south on a line slightly west of Nairobi (Figure 2).

These two branches together have been termed the East African Rift (EAR), while parts of the Eastern branch have been variously termed the Kenya Rift or the Gregory Rift (after the geologist who first mapped it in the early 1900’s). The two EAR branches are often grouped with the Ethiopian Rift to form the East Africa Rift System (EARS).

The complete rift system therefore extends 1000’s of kilometers in Africa alone and several 1000 more if we include the Red Sea and Gulf of Aden as extensions. In addition there are several well-defined but definitely smaller structures, called grabens, that have rift-like character and are clearly associated geologically with the major rifts. Some of these have been given names reflecting this such as the Nyanza Rift in Western Kenya near Lake Victoria. Thus, what people might assume to be a single rift somewhere in East Africa is really a series of distinct rift basins which are all related and produce the distinctive geology and topography of East Africa. 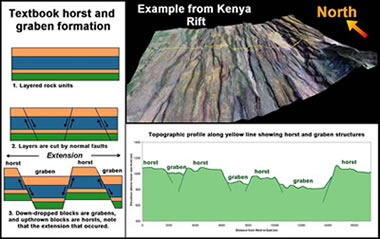 Figure 3: “Textbook” horst and graben formation (left) compared with actual rift terrain (upper right) and topography (lower right). Notice how the width taken up by the trapezoidal areas undergoing normal faulting and horst and graben formation increases from top to bottom in the left panel. Rifts are considered extensional features (continental plates are pulling apart) and so often display this type of structure.
Click to Enlarge.

How did these Rifts form?

The exact mechanism of rift formation is an on-going debate among geologists and geophysicists. One popular model for the EARS assumes that elevated heat flow from the mantle (strictly the asthenosphere) is causing a pair of thermal “bulges” in central Kenya and the Afar region of north-central Ethiopia. These bulges can be easily seen as elevated highlands on any topographic map of the area (Figure 1).

As these bulges form, they stretch and fracture the outer brittle crust into a series of normal faults forming the classic horst and graben structure of rift valleys (Figure 3). Most current geological thinking holds that bulges are initiated by mantle plumes under the continent heating the overlying crust and causing it to expand and fracture.

Ideally the dominant fractures created occur in a pattern consisting of three fractures or fracture zones radiating from a point with an angular separation of 120 degrees. The point from which the three branches radiate is called a “triple junction” and is well illustrated in the Afar region of Ethiopia (Figure 4), where two branches are occupied by the Red Sea and Gulf of Aden, and the third rift branch runs to the south through Ethiopia.

The stretching process associated with rift formation is often preceded by huge volcanic eruptions which flow over large areas and are usually preserved/exposed on the flanks of the rift. These eruptions are considered by some geologists to be “flood basalts” – the lava is erupted along fractures (rather than at individual volcanoes) and runs over the land in sheets like water during a flood.

Such eruptions can cover massive areas of land and develop enormous thicknesses (the Deccan Traps of India and the Siberian Traps are examples). If the stretching of the crust continues, it forms a “stretched zone” of thinned crust consisting of a mix of basaltic and continental rocks which eventually drops below sea level, as has happened in the Red Sea and Gulf of Aden. Further stretching leads to the formation of oceanic crust and the birth of a new ocean basin. 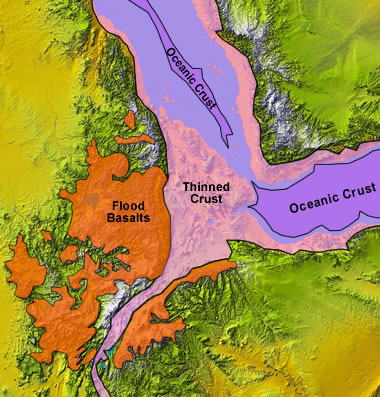 Figure 4: Triple Junction in the Afar region of Ethiopia. Image shows areas of stretched and oceanic crust as well as areas of exposed flood basalts that preceded rifting. Areas unshaded or covered by flood basalts represent normal continental crust. As the crust is pulled apart you end up with thinned crust with a complex mixture of continental and volcanic rock. Eventually the crust thins to the point where oceanic-type basalts are erupted which is the signal that new ocean crust is being formed. This can be seen in the Gulf of Aden as well as a small sliver within the Red Sea. The original extent of the flood basalts would have been greater, but large areas have been buried within the rift valley by other volcanic eruptions and sediments. Click to Enlarge.

If the rifting process described occurs in a continental setting, then we have a situation similar to what is now occurring in Kenya where the East African/Gregory Rift is forming. In this case it is referred to as “continental rifting” (for obvious reasons) and provides a glimpse into what may have been the early development of the Ethiopian Rift.

As mentioned in Part I, the rifting of East Africa is complicated by the fact that two branches have developed, one to the west which hosts the African Great Lakes (where the rift filled with water) and another nearly parallel rift about 600 kilometers to the east which nearly bisects Kenya north-to-south before entering Tanzania where it seems to die out (Figure 2).

Lake Victoria sits between these two branches. It is thought that these rifts are generally following old sutures between ancient continental masses that collided billions of years ago to form the African craton and that the split around the Lake Victoria region occurred due to the presence of a small core of ancient metamorphic rock, the Tanzania craton, that was too hard for the rift to tear through. Because the rift could not go straight through this area, it instead diverged around it leading to the two branches that can be seen today.

As is the case in Ethiopia, a hot spot seems to be situated under central Kenya, as evidenced by the elevated topographic dome there (Figure 1). This is almost exactly analogous to the rift Ethiopia, and in fact, some geologists have suggested that the Kenya dome is the same hotspot or plume that gave rise to the initial Ethiopian rifting. Whatever the cause, it is clear that we have two rifts that are separated enough to justify giving them different names, but near enough to suggest that they are genetically related. 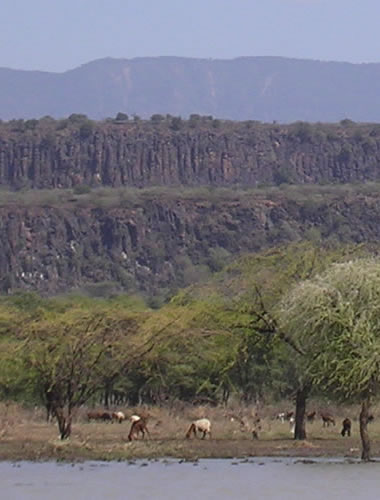 Baringo scarps: This image shows several fault scarps that are progressively farther away. Essentially we are looking at the edges of several horst blocks from within a graben that contains Lake Baringo. Image copyright Alex Guth. Click to Enlarge.

Other Points of Interest:

What else can we say about the Ethiopian and Kenya Rifts? Quite a lot actually; even though the Eastern and Western branches were developed by the same processes they have very different characters. The Eastern Branch is characterized by greater volcanic activity while the Western Branch is characterized by much deeper basins that contain large lakes and lots of sediment (including Lakes Tanganyika, the 2nd deepest lake in the world, and Malawi).

Recently, basalt eruptions and active crevice formation have been observed in the Ethiopian Rift which permits us to directly observe the initial formation of ocean basins on land. This is one of the reasons why the East African Rift System is so interesting to scientists. Most rifts in other parts of the world have progressed to the point that they are now either under water or have been filled in with sediments and are thus hard to study directly. The East African Rift System however, is an excellent field laboratory to study a modern, actively developing rift system.

This region is also important for understanding the roots of human evolution. Many hominid fossil finds occur within the rift, and it is currently thought that the rift’s evolution may have played an integral role in shaping our development. The structure and evolution of the rift may have made East Africa more sensitive to climate changes which lead to many alternations between wet and arid periods. This environmental pressure could have been the drive needed for our ancestors to become bipedal and more brainy as they attempted to adapt to these shifting climates (see Geotimes 2008 articles: Rocking the Cradle of Humanity by Beth Christensen and Mark Maslin, and Tectonic Hypotheses of Human Evolution by M. Royhan Gani and Nahid DS Gani). 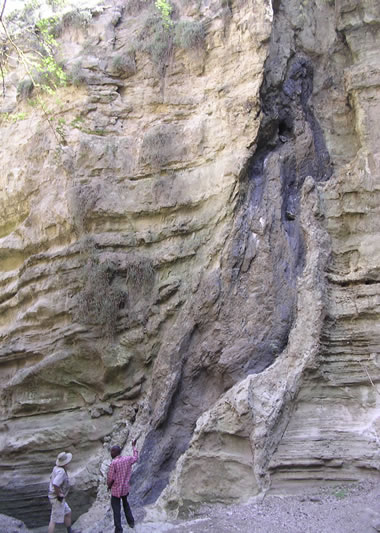 Igneous dike in Njorowa Gorge: This was taken at the Njorowa Gorge in Hell’s Gate National Park. The gorge was carved by water, and is quite spectacular in many regards, but here we have an igneous dike cutting through the wall of the canyon, with Dr. Wood and one of our guides for scale. Image copyright Alex Guth. Click to Enlarge.

The East African Rift System is a complicated system of rift segments which provide a modern analog to help us understand how continents break apart. It is also a great example of how many natural systems can be intertwined – this unique geological setting may have altered the local climate which may have in turn caused our ancestors to develop the skills necessary to walk upright, develop culture and ponder how such a rift came to be. Just like the Grand Canyon, the East African Rift System should be high on any geologist’s list of geologic marvels to visit.

James Wood has a PhD from Johns Hopkins University and is currently Professor of Geology at the Michigan Technological University in Houghton, Michigan where he teaches Earth History, Geochemistry, Remote Mapping and conducts a field course every spring in East Africa. His main research interests are energy deposits, mainly gas and oil, and doing field work in rift valleys. More information on the East Africa field course can be found at www.geo-kenya.com.

Alex Guth is currently a PhD candidate at Michigan Tech and is looking at the effects of climate on desert varnish on the exposed flows and alluvium in the East African Rift Valley. She assists Dr. Wood with the geology field camp. She recently produced a geologic map of the southern half of the Kenya Rift which may be found at www.geo-kenya.com. Her website can be viewed at: pages.mtu.edu/~alguth/.